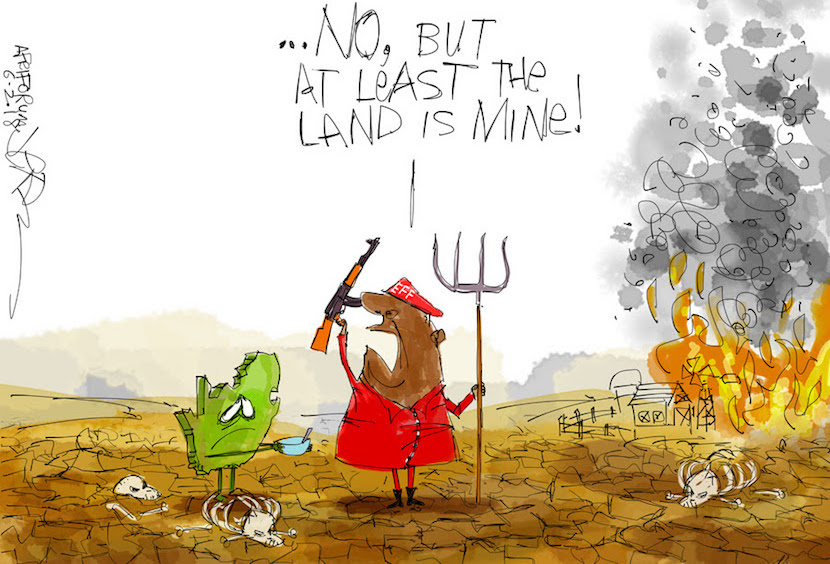 The contentious “expropriation without compensation of land” has been on the government’s agenda since December 2012, an act that allows fixed property – a house, a farm or business premises in the hands of government officials without paying for them. The Daily Friend’s Terrence Corrigan explains that the act need not be so direct, however, and warns of the risks inherent in the Expropriation bill, coupled with the varying interpretations of other acts like the Unlawful Entry on Premises Bill – which obliges property owners and occupiers to report the presence of intruders to the police (‘as soon as it comes to the attention of the lawful occupier’), and for the police to intervene to remove them. Finally, the Land Court Bill explicitly seeks to ‘promote land reform as a means of redressing the results of past discrimination and facilitate land justice’. The question is whether these proposals expand the possibilities for the state to deprive South Africans of their property. Time will tell how all this new legislation will play out, but one thing is certain: the implications for South Africans who own, or aspire to own property, are worrying to say the least. – Asime Nyide

Fixed property – a house, a farm, business premises, or some other sundry variant of real estate – is a significant investment for anybody.

To commit to making such an investment will invariably only make sense if there is an expectation that it will be securely held and protected from damage or seizure, whether this is at the hands of other people or at the hands of the authorities.

This is an essential part of what we call property rights – note that these refer not to the notion that property has rights (a rather odd accusation levelled at the Institute by some of its critics), but that people have rights over their property. Property rights are in turn an essential part of a broader human rights architecture, an anchor of civil liberties and an important condition for prosperity.

Of course, property rights (most rights for that matter) are seldom absolute, and it is a matter of intense importance how law and policy might allow for their abrogation.

For some years now, this has been a live issue. The broad rubric here is the idea of Expropriation without Compensation. Perhaps it’s necessary to set this out briefly. EWC refers directly to the intended policy of the African National Congress and the government it controls to seize property without paying for it. This is what President Ramaphosa pledged in its unadulterated form in May 2018: ‘We are going to take land and when we take land we are going to take it without compensation.’

In this view, EWC is a blunt and radical process (radical in the sense of ‘going to the root’) in which the state will effectively confiscate property in toto.

EWC need not however, be so direct and final. It might involve taking parts of a property, expropriating at a ‘discount’ (for the state, leaving the former owner with the loss), or diverting its value. The common thread is a drive to abridge property rights, to expand the latitude of the state to intrude into the rights of private property holders.

The failure to push through a constitutional amendment was a significant win against this agenda, but not a definitive one. It would have limited the constitutional protections available and would have been deeply symbolic, but was neither the only vector of the EWC strategy, nor even the most important one.

In favour of the state

In this vein, the Institute has been warning of the risks inherent in the pending Expropriation Bill. It weights the process in favour of the state; where expropriation is threatened, and unwilling owners could find the law quite coercive.

In a week’s time, the parliamentary committee responsible for processing the Bill will vote on it. If it gains majority support in this forum – as seems likely – it will be referred to the National Assembly.

One interesting provision concerns the circumstances under which ‘nil’ compensation is permissible. One of these relates to circumstances in which ‘an owner has abandoned the land by failing to exercise control over it’.

‘Abandoned’ suggests that the owner has no interest or involvement in the property, or even that he or she cannot be traced. (This is a recurrent issue in urban decay, where managing properties becomes more burdensome than they are worth.) The qualifier, ‘by failing to exercise control over it’, puts a somewhat different spin on the idea.

If failing to exercise control over the property constitutes abandonment, then a great deal beyond wilful neglect could apply.

One important concern for many property owners in South Africa is the question of ‘invasions’ or ‘occupations’: the seizure of land by someone not acting for the state, whether an individual, a family or a community. Although the government has pledged that these will ‘not be tolerated’, in reality, they often are. Those interested could do worse than consulting Karl Kemp’s Promised Land and its accounts of the sometimes highly organised nature of these invasions.

A piece of proposed legislation germane to this is the Unlawful Entering on Premises Bill, which is intended to replace the Trespass Act. This obliges property owners and occupiers to report the presence of intruders to the police (‘as soon as it comes to the attention of the lawful occupier’), and for the police to intervene to remove them. It also includes a specific reference to the possibility that the intruders might be intended to settle themselves: ‘If intruders already erected any form of housing on the premises and already occupy the erected housing, the authorised member or members must arrest them for unlawful entry on a premises.’

As a practical matter, there exists considerable anecdotal evidence that the police are not generally concerned with dealing with land invasions, viewing it as a low-priority matter.

However, these proposals sit uncomfortably alongside the recent ruling in the Western Cape High Court on the eviction of Bulelani Qolani. His case attracted a lot of attention in 2020 when it was captured on camera, Qolani having been naked at the time. Noting that ‘whether such structures [informal housing] are complete, incomplete, or in the process of being built, they are capable of providing shelter from the elements’, and because of the constitutional rights involved, this suggests that court orders needed to be obtained before evictions. This in turn would seem to imply that it’s questionable whether the police would be able to remove people who had settled illegally on a property without the requisite court order. A court order could take significant time and resources to obtain.

Interestingly, the Unlawful Entering on Premises Bill also provides that a defence  against a charge under the proposed legislation would be that ‘the person charged reasonably believed that they had title to or an interest in the premises that entitled them to enter the premises.’

It remains to be seen how this will be interpreted. But it’s not inconceivable that this might be invoked in cases where land invasions are orchestrated and local strongmen have demanded payment by prospective occupiers. Or where prolonged inaction – either through slow court processes, or state inaction – might create the expectation that permission to remain has been granted. Or perhaps where political rhetoric or policy debate has generated that impression.

Furthermore, land-related issues are intended to come under the purview of the Land Court Bill. This will include matters around evictions. A troubling part of this is that the Bill envisages the presiding judge sitting alongside two lay assessors. They will have power to override the judge in matters of fact, though not in matters of law. It is not clear what qualifications or experience they will be expected to have, but it is eminently possible that a background in land activism might be a recommending factor. Should this be the case, questions of whether land is in fact ‘abandoned’, or whether an owner has failed to ‘exercise control’, or the circumstances around a possible eviction might be adjudicated with a distinctly political goal in mind.

The Land Court Bill does, after all, explicitly seek to ‘promote land reform as a means of redressing the results of past discrimination and facilitate land justice’.

Individually, these proposals represent the ongoing EWC agenda; the expansion of the possibilities for the state to deprive South Africa’s people of property, and to reduce its own obligations to protect their rights in this regard. Cumulatively, they form a formidable set of vehicles in this policy drive.

The implications for the country, and for each South African owning or aspiring to own property, are not encouraging.