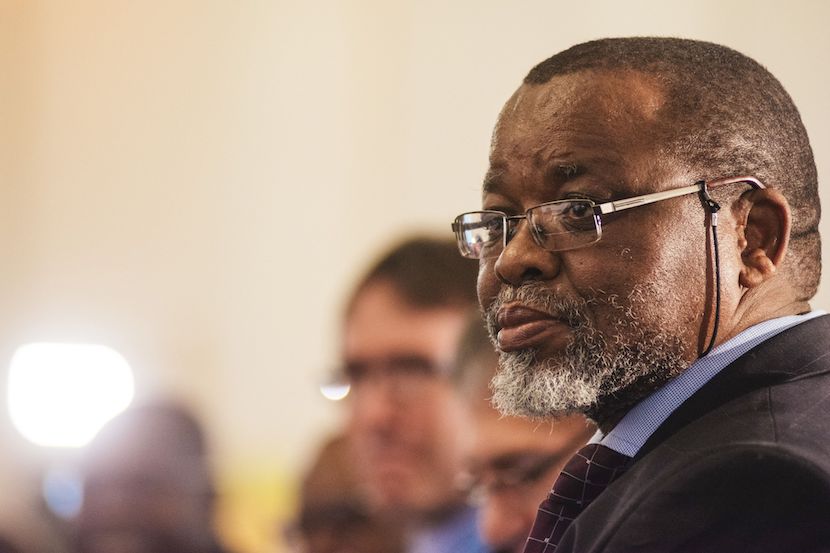 With Eskom’s failure to keep the lights on in South Africa and power blackouts that intensified towards the end of last year to Stage 6 loadshedding, the mining sector was particularly hard hit with some mines having to shut down production for days. The call from miners to be allowed to produce their own energy became louder and louder and last week the Minerals Council that represents the biggest mining companies operating in the country indicated that they plan to build 609 megawatts of electricity generating capacity if they can get official approval for the projects.  These would be mainly photovoltaic solar projects that would generate power for the miners’ own use. And the government has finally heeded to the calls with Mineral and Resources Minister Gwede Mantashe telling delegates at the Mining Indaba that mining companies “will be allowed to generate energy for self-use”. They won’t need licences, but they have to register. And that was not the only bombshell he dropped. Mantashe also announced that the government is planning to create an alternative power generation entity, which could use a range of technologies including solar power and ‘clean coal’, easing the pressure off the sickly Eskom. – Linda van Tilburg

Once more, welcome to this – the 26th edition, of Investing In Africa Mining Indaba.

Globally, the world is grappling with a changing economic landscape, led by the 4th Industrial Revolution. Global growth is projected to rise from an estimated 2.9 percent in 2019 to 3.3 percent in 2020; and 3.4 percent for 2021.

According to the International Monetary Fund (IMF), South Africa’s GDP growth prospects for 2020 will be just under 1 percent. Contributing factors to this outlook are said to be structural constraints and recent power outages. The latest data released by Statistics SA show that mining production decreased by 3.1 percent year-on-year in November 2019. The largest contributors to the decline in production were platinum group metals (PGMs), coal, and iron ore. On the positive side, however, “non-metallic” minerals made significant positive contribution to production.

Since the beginning of 2019 some commodity prices showed marked improvement; thus helping several mining companies to improve their balance sheets and register healthy profits. Average prices for most commodities are expected to remain relatively flat or have marginal growth in 2020 and beyond. This will provide a better basis for most mining projects in the coming years.

Demands of the 4th Industrial Revolution present new growth opportunities for the mining industry. The industry must position itself to take advantage of this reality.

South African mining has great benefits for investors and South Africans across the value chain. In 2019, in response to the President’s R1 trillion Investment Drive, the Department granted 28 new mining rights in coal; iron ore; manganese. Estimates are that; a potential of 4 800 jobs will be created from these and there will be a billion Rands capital expenditure. We must work together to convert these rights into active projects that can deliver the much-needed revenue and jobs.

Job losses in the mining sectors

We have noted with concern the recent announcements for planned retrenchments. The 2018/19 Annual Report of the CCMA highlights Section 189 retrenchments in the mining sector as the second largest contributor of job losses after the construction sector. Stakeholders and social partners and the Department must dialogue to find ways against job losses.

Transforming of the economy and creating jobs is one of the seven apex priorities for the 6th democratic administration, declared by President Cyril Ramaphosa. Policy and regulatory certainty are key to attracting investments. To this end, we remain committed and continue to work with the investor community on improving our regulatory framework to provide such certainty.

We have advanced with the separation of the upstream legislative provisions for oil and gas from traditional minerals. In December 2019, we gazetted the draft Upstream Petroleum Development Bill for public comments. Since then, we have been receiving positive comments on the Bill and this is a signal to us that we are on the right path.

Electricity as a driver for growth in mining

Economic growth and sustainability are bolstered in an environment of a secure and reliable electricity supply. Addressing Indaba 2019, President Ramaphosa outlined measures being considered to address the electricity supply challenges. To this end, in October last year, we gazetted the Integrated Resource Plan (IRP) – the country’s blueprint for long-term electricity generation options; which provides for a diversified energy mix.

Following concurrence by energy regulator, NERSA, we are in the process of gazetting a revised Schedule 2 of the Electricity Regulation Act; which will enable self-generation; and facilitate municipal generation options under “Distributed Generation”. This will help close the energy gap caused by deteriorating Eskom plant performance. Depending on the circumstances, the generation plant may only require registration and not licensing.

Furthermore, in December 2019, we issued a Request for Information (RFI) – inviting responses from the market on innovative potential solutions to deliver power generation to the grid as expeditiously as possible. We welcome all inputs from the market, these will give the Department a sense of possible immediate generation options available in the next three (3) to twelve (12) months to fill the short to medium term gap.

As we focus on energy security, we are also attending to the just transition towards low-carbon emissions. The Council for Geoscience (CGS), therefore, is looking at frontier coalfields and the establishment of additional generation capacity in support of carbon capture storage and utilisation (CCUS). In an effort to increase energy efficiency, the CGS will further investigate the potential of carbon utilisation in contributing to enhanced geothermal energy generation and improved extraction of coal-bed methane.

Together with Anglo Platinum, the Department – through our agency Mintek; are working on using hydro-fuel cells as an energy source for the mining trucks. The intention is to replace diesel usage with hydro-fuel cell technology. This is a major and innovative project that will have a significant impact on low carbon emissions and cost effectiveness. It is also an example of good partnership between Government and Business.

In addition to these initiatives, we are seeking solutions to network infrastructure challenges facing the mining sector, namely rail and port infrastructure, by engaging the Department of Public Enterprises.

Mining companies must take seriously the communities on whose land they mine. The 10 value-creating principles for a more modern, successful and productive mining industry, referred to by President Ramaphosa in 2019, challenge mining right-holders on what they should do as part of their license conditions and as part of their social license to operate. In our assessment of the implementation of social and labour plans last year, we found that 108 SLPs have been implemented, to the value of just over R600 million.

We commend those who are playing their part towards the creation of a growing, inclusive, competitive and transformed mining industry. We urge all investors to prioritise this matter.

We want to see more exploration taking place. The intention is to grow the national target from below 5% to respectable levels within the next few years. Government has, therefore, invested in the integrated and multi-disciplinary geoscience mapping programme. Early results are uncovering previously undefined geological features that may host significant mineral wealth. For example, recently defined extensions of greenstone belts that may host hydrothermal mineral deposits and alkaline complexes. These may yet prove to host rare earth elements and other critical mineral resources.

I am informed that the CGS has developed the data policy; in order that key data and knowledge generated throughout this programme will be made available to the public through the CGS data portal.

We can create significant value, grow the economy and create employment opportunities through local processing and beneficiation. As part of our efforts in this regard, we are in the process of developing a mining and beneficiation masterplan for the sector, as part of implementation of the Mining Leadership Compact, and to grow the contribution of the mineral-energy complex to the economy.

Furthermore, Government, through its mining research entity Mintek, is involved in programmes aimed at identifying and supporting local beneficiation; such as:

Health and safety status in the industry

Health and safety of employees is a key priority. Together we made significant progress in 2019, reducing fatalities from 81 in 2018 t0 51 in 2019. This is our record low, and evidence that a fatality-free mining industry is possible. We must redouble our efforts to reach our goal of zero harm.

The mining and energy portfolio is critical to economic growth and development. The merging of the two Departments asserts their mutually reinforcing nature. This should result in a Department that is adequately capacitated, efficient and responsive to the needs of the industry and the economy broadly.

South Africa and the African continent are important to global mining and its development. They should be the destination of choice for the investment community.

Separate from the energy crises, which seemingly dominated his address, the Minister also touched on the draft Upstream Petroleum Resources Development Bill, 2019. The Bill raises many questions and unfortunately fails to adequately provide for the regulation of offshore petroleum exploration and production.

To his credit, the Minister acknowledged South Africa’s 1.3% mining production decline, for the fourth consecutive quarter. More than ever, the speed of technological advancement, climate change, sustainable operations, the need for a social licence, and changing consumer behaviour should be front of mind for the government as well as mining companies. To ensure long-term sustainable growth the industry needs to find a balance between stakeholder needs and capital allocation decisions. This will only be achieved if the government implements strong fiscal consolidation policies accompanied by decisive structural reform measures to boost private sector led inclusive growth.