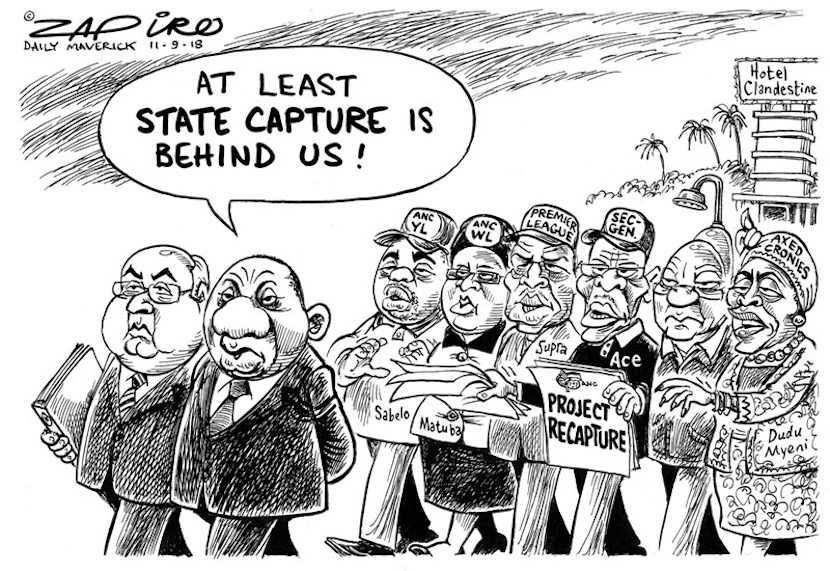 Every step towards eradicating corruption in the country is applauded by us, especially those in the business sectors and we all have the wish that one day, we can draw a line under this – that we did manage to conquer another scourge in our country that has so much potential. And progress is being made; the Zondo Commission is painstakingly unravelling the story of state capture and the charges against the SARS officials accused of being a rogue unit have been dropped by the National Prosecuting Authority, to name a few victories. But as CNN business host Richard Quest told Bruce Whitfield at Davos in Switzerland, “You’re entire economy has been hijacked – How many people are in jail?”. Quest is right, there has been slow progress on putting those guilty of state capture into orange onesies. And while we are all waiting for prosecutions to be speeded, comes this stark warning from Frans Cronjé from the Institute of Race Relations that the ANC’s policy of cadre deployment could lead to a second and third wave of state capture. First published in the Daily Friend. – Linda van Tilburg

The second (and third) waves of state capture are coming

The first wave of state capture had its origins in the cadre deployment and transformation policies of the African National Congress (ANC) which degenerated into the looting of state institutions. These policies allowed the party, through the government, extraordinary regulatory and administrative powers and deployed cadres just could not withstand dipping into the public purse.

A senior ANC leader once told me that what the party desired was a model of ‘sustainable wealth extraction’ in which the party, through the state, could draw wealth out of the country without driving investment out of the country – but bemoaned that greed and infighting among cadres was so great that they could not help but destroy the institutions they were deployed to lead.

The consequences can be seen in Eskom, in creaking infrastructure, failing municipalities, toxic rivers, dangerous hospitals, and corrupt policing. They can be read in the testimony to the Zondo Commission, the Gupta leaks, and the reports of the Auditor General. As Minister of Public Enterprises Pravin Gordhan is reported to have said, ‘If you thought it was bad, it was worse.’

But I am afraid that if the first wave of state capture related to the destruction of public institutions and infrastructure, the second (and later) waves may relate to the attempts at their rebuilding.

The formulae for those subsequent waves will have three components. The first will be large amounts of corporate, pension, and development financing being made available for rebuilding. The second will be the nominal ‘privatization’ or private contracting of firms to rebuild that which has been broken. The third will be to apply the above via the same regulatory and administrative mechanisms that led to the first wave of state capture.

Here are some practical examples:

The energy parastatal/municipal water works/public hospital/mining industry is failing. South Africa suffers an electricity/water/healthcare/mining crisis. Something must be done. New generating capacity/refurbished infrastructure/better healthcare administration/new mining investment must be brought on line to save the country. Large amounts of development financing must be raised, with business, government, labour, and the international community (especially under wave three) working closely together. Collectively they will agree that the ‘private sector’, or at least private-public partnerships, must do the delivery as the capacity of the state is so eroded. Calls will go out for applications from suitably qualified firms to do the work or lead these partnerships. But these firms and the contracts they win will be surveyed by the same political leadership and through the same prisms of cadre deployment and transformation that led to the first wave of state capture.

We at the Institute of Race Relations (IRR) think transformation is very important in the sense of introducing effective empowerment and affirmative action policies that identify people on the grounds of socio-economic disadvantage and help them into the middle classes. But what passes as transformation in the government and the ANC is not that but rather a racial nationalist policy that acts as a fig leaf to conceal corruption, malfeasance, and the looting of public funds by painting any critic of the policy as racist.

Put it quite bluntly; you can grow rich off looting Eskom into the ground, and then win the financing and tenders to supply the renewable energy that South Africa needs to keep the lights on. When anyone questions what is going on you can again throw the racism accusation at them (and in the case of renewable energy) the climate-change denialist accusation.

What ends up happening is that, having exhausted the resources available from public institutions, the ANC’s political elite pivot under the guise of privatization and reconstruction to keep the cash taps flowing. State capture is ongoing – it is only the business and financial model that has changed. If you have any doubt think about what has happened at South African Airways (SAA) where banks and a development financing institution have stumped up several billion rand to keep the cash flowing without which that fragile cadre-deployment house of cards would already have come tumbling down. When asked why they did it, the development bank said that if they had not then SAA would have folded – not the basis of sound banking or investment policy.

An implication of our ‘waves of state capture’ thesis is that it is too early now to speak of public-private partnerships, raising development finance, and rebuilding, and will remain so as long as the current political elite that looted the country is still in charge.

The first cycle of state capture lasted almost twenty years before running out of cash in the aftermath of the 2009 financial crisis and the frenzied looting that followed. If the looting had been done in moderation it might have lasted longer. The second may not last as long but given the quantum of private funds held within the country, including pension funds, it could last for many years. The third wave will come after those private funds are exhausted and international funding agencies are forced to step in.

The IRR first warned about the implications of cadre deployment and what is today called state capture almost twenty years ago. For much of the time that followed, the warnings were ignored or loudly countered. It is important to say that because this is not our first rodeo and the methods and tools we used to make that call 20 years ago are the same as those that allow us to flag the lining up of state capture ducks all over again.

If you ask how these next waves can be avoided, the most compelling answer now is the complete defeat of the ANC so that it is out of government. Short of such an outcome, and short of a sincere effort to jail the corrupt in its ranks, our assessment is ever more that the ANC in government will repeat the cycle of state capture time and again, simply changing the source of finance ahead of each new wave.

Twenty years ago very few influential people were willing to admit, let alone speak out or act against, the dangers inherent in the nexus between cadre deployment, what passes as transformation policy, and the enormous administrative power of the state. Today, equally few seem able to admit that the ANC must be driven out of government to stop the cycle.