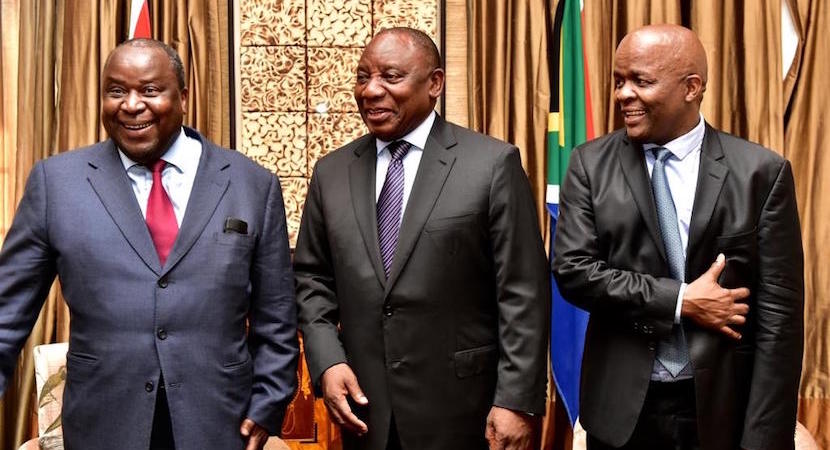 JOHANNESBURG — Analysis aside, the appointment of former Reserve Bank governor Tito Mboweni as Finance Minister saw the Rand strengthen around 40c. Showing signs of relief following the resignation of Nhlanhla Nene, and what might have been… But what can Mboweni bring to the table? In the analysis below respected economist Azar Jammine paints Mboweni’s history, a cross section of public and private sector experience. And while this will come in handy his first task will be the Medium Term Budget Policy Statement in two weeks time. But as Jammine notes, most of the mini-budget has likely been produced already, Mboweni’s big challenge is how he delivers it. And if there’s one thing he’s got, it’s Chutzpah, which is sure to come in handy when the questions fly in parliament. – Stuart Lowman

Mboweni comes with much varied experience in financial leadership

In our last Ecobulletin dealing with the concerns about the potential economic implications of the furore surrounding former Finance Minister’s testimony to the Zondo Commission of Inquiry into State Capture, we argued that there were a number of candidates available to take over as Minister of Finance who could arguably do as good a job, if not better, than that of the incumbent Minister. We also suggested that most of the preparation for the MTBPS in two weeks’ time had already been completed and there would therefore be no major challenge for a new Minister to present the so-called “mini-budget”. Amongst candidates that we felt would be suitable for this position we cited former Deputy Minister of Finance Mcebisi Jonas, or Reserve Bank Governor Lesetja Kganyago. It did not occur to us that former Labour Minister and Central Bank Governor Tito Mboweni, might also be available for the position. After all, the latter had indicated earlier in the year that he was not keen to resume public office. In the event, however, financial markets and the Rand understandably welcomed the announcement by President Ramaphosa.

Firstly, there was relief that a decisive step had been taken to clear up the political turmoil surrounding the disclosures made by Nene and secondly, there was a clear vote of approval for Mboweni’s appointment. There was a general recognition that in his term of office as Central Bank Governor, Mboweni imprinted his leadership ability as well as credibility in heading up an institution of that calibre.

However, the merits of Mboweni taking over as Minister of Finance arguably go beyond just his successful stint as Governor of the Reserve Bank, from 1999 to 2009, during which he contributed towards the finest performance of the South African economy over the past half-century. Prior to his assumption of the central bank governorship, Mboweni had an interesting history with regard to economic developments within the ANC. Our first contact with him was in 1990 when he represented domestically the chapters by a left-wing author, Prof Laurence Harris, from Sussex University, in a book “McGregor’s Economic Alternatives” which we co-authored with Harris and a couple of other leading business figures. The idea was to contemplate and debate on what economic policy under an impending ANC government should look like. It was clear that Mboweni supported nationalisation and government intervention as the way to go. This position as policy adviser to the ANC was transformed into his appointment as Minister of Labour under the new Mandela government in 1994.

His term of office as Minister of Labour was characterised by the introduction of labour legislation which to this day has sought to protect the interests of the workers. Ironically, given the change of ideology apparent in Mboweni’s approach subsequently as Central Bank Governor, many businessmen have blamed the increase in unemployment in South Africa arising out of inflexibility of the labour market, to the type of legislation introduced by Mboweni in the mid-1990s. The fact is that in 1998 when Mboweni was appointed as designated candidate to take over as Reserve Bank Governor from Chris Stals one year later in 1999 and to serve a year’s tutelage under Stals before taking up the governorship, markets were appalled and trashed the Rand, taking it from around R4.50 to the Dollar to a low point of R6.86 in a fairly short space of time. The period coincided with the outbreak of the Asian crisis so that one could not blame the entire fall in the value of the Rand to the appointment of Mboweni alone. Nonetheless, this illustrated the panic that ensued out of the fear that South Africa’s monetary policy would now fall under the leadership of a left-wing politician.

The Rand says thanks and is feeling much better now. #TitoMboweni #Rand

Ironically, nothing could have been further from the truth. It appears as if the year’s guidance under the leadership of Stals and the associated interactions he may have had with bodies such as the IMF, changed Mboweni’s attitude towards economic policy. Not only did he succeed in trebling the country’s foreign exchange reserves in the ensuing decade, but he also came to be seen as a very conservative central bank leader, who did not bow down to pressure by trade unions to adopt a more lax monetary policy.

Additional experience in the private sector

Indeed, if there is one concern that one might have about Mboweni’s impending leadership of the Finance Ministry it is that he might run into opposition from within the trade union movement which came to dislike him and his style of leadership as Reserve Bank Governor. Interestingly, what also characterised his leadership of the Reserve Bank is that not only was he unafraid to confront the unions, but he was also unafraid to go against consensus opinions of what monetary policy changes should be put into effect.

Subsequent to the end of his term of office as Reserve Bank Governor, Mboweni acquired experience in the private sector, joining a number of boards as non-executive director and becoming a member of the Advisory Board to Goldman Sachs. We suspect it was his link to the latter who in turn are ardent supporters of President Ramaphosa, which may have led to Mboweni being persuaded to reverse his reluctance to take on public office. To the extent that Mboweni has been involved in policy advice to the ANC, heading up a ministry with the support of labour unions, leading the Reserve Bank for a decade and then being involved in senior positions within the private sector, in some respects he replicates the impressive CV across a broad section of functions which gave Ramaphosa the support to take over the leadership of the country as a whole.

Some might even speculate that the latest move by Mboweni will serve as a stepping stone to his ultimate goal of even higher office.

No need to panic about MTBPS

In the short-term, Mboweni should be able to fit into his new position relatively seamlessly. There has been much concern about the tabling of the MTBPS in a fortnight’s time in the midst of a change in leadership at the Reserve Bank. However, it should be borne in mind that most of the work and the parameters used to formulate the MTBPS, have already been completed. The only thing that Mboweni will need to do is to ensure a strong delivery of the speech that enhances his credibility still further. Many see him as a person with charisma that will easily be able to carry the day in this regard. Some see him as a caretaker Minister of Finance until the general election and the likely cabinet reshuffle that will follow. However, we see his tenure as being of a more permanent disposition and easily likely to last the duration of Ramaphosa’s leadership of the country.

One aspect regarding Mboweni’s appointment that should appeal is the fact that his conservative stance as Governor of the Reserve Bank suggests that he will also take to heart the need to maintain fiscal discipline in the Treasury. Given his ability to stand up to opposition, his leadership style, whilst not necessarily endearing him to everyone, is likely to enhance the country’s ability to stick to its budgets. We suspect that Moody’s will allude to this trait when presenting its review of the South African economy on Friday. We firmly believe that the appointment of Mboweni as Minister of Finance will enhance the ability of South Africa to maintain its credit ratings for the foreseeable future. We may also see increased ruthlessness under his leadership in dealing with incompetence that may prevail with many state-owned enterprises.

Even so, structural challenges remain to be addressed

As much as one welcomes the appointment of Mboweni as Minister of Finance, it is important to note that this new appointment on its own will not resolve South Africa’s languishing economic performance. There are still several structural impediments to economic growth and a massive ideological divide between those who favour government intervention to resolve the problems and those who believe that market-oriented solutions are called for. There is a sense in which Tito Mboweni may be just the right person to deal with the ideological divide given the fact that he has been positioned on either side of it through his career and with his no-nonsense type of leadership, he could just enable a bridge of that divide in a manner that enhances structural reform in the longer term. It will be some time before one will be able to assess whether or not the new Minister of Finance can indeed rise to the occasion in this regard.

Unfortunately, one also realises that achievement of this goal does not rest entirely within his grasp, but that he still forms just one member of a broader political party many of whose components are motivated by different agendas.

Nonetheless, on the positive side, what provides some comfort is the fact that Mboweni has not been involved in the political scene during the period in which state capture has exacted its toll on the South African economy. To that extent, he is seen as “clean”. However, there is one form of criticism that may have some validity and that is that the appointment represented a recycling of tried and tested politicians rather than seeking to find new and younger blood to take over important positions within government. At the same time, one needs to question whether this would have been the appropriate time to start tampering with risky appointments whose success might not have been as assured as we suspect the latest move will prove to be.