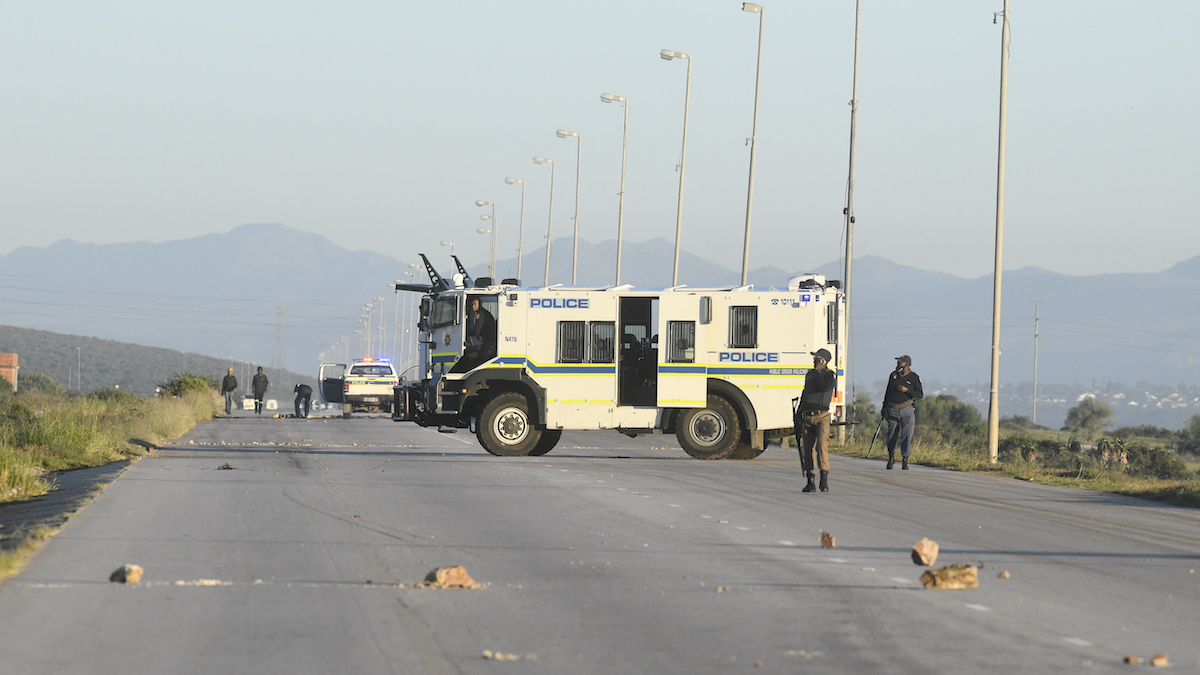 With only 16% of SA’s municipalities achieving clean audits, (more than half in the Western Cape and none in the Free State for the past five years), neither provincial nor national government seems capable of coming to the rescue. Which prompts freelance financial journalist, Jonathan Katzenellenbogen, writing in the Daily Friend, to suggest a combination of solutions working splendidly in a few small towns. These are tough Auditor-General interventions like the halting of contracts and disciplinary steps – as well as local community self-help projects combining formal and informal residents and businesses. It’s a whip and reward situation. The whip insists on accountability – or else – and the reward is getting stuck in and doing what your dysfunctional council can’t or won’t do. There’s one caveat; you have to be nice to them to get permission to do so. If the history of NGOs and government in our country is anything to go by, they’ll be extremely pleased to get the job done, especially if they can claim even partial credit afterwards. – Chris Bateman

What to do about municipal failure?

South Africa’s municipal crisis is worsening, but there is hope that with greater citizen involvement and new political blood, matters could be partially reversed.

The best and most immediate hope is for citizens to do much of what municipalities should be doing.

There is a growing catalogue of recent municipal disasters. Next month large parts of Nelson Mandela Bay metro are expected to run out of water. While drought has been a factor in the onset of the expected Day Zero, so has gross mismanagement. In Durban raw sewage is being pumped into the sea due to the failure to repair sewage treatment plants after the recent floods.

Last week’s release of the Auditor-General’s annual report on the state of municipal reporting is a depressing reminder of the predicament of municipalities. In the 2020/21 financial year only 41 out of the country’s 257 municipalities – 16% – achieved clean audits. Of these, 22 were in the Western Cape. For the past five years not one municipality in the Free State has received a clean audit.

‘Despite us reporting shortcomings and providing recommendations over the years as well as numerous and costly national provincial initiatives and interventions, the poor status of key financial management controls shows that municipalities have not yet mastered financial reporting – 75% of municipalities were not able to submit quality financial statements for auditing,’ says the latest Auditor-General’s report.

The Auditor-General says its tough approach to matters of material irregularities is yielding results. ‘Where municipal managers were not responsive, we used our enforcement mandate to take action.’

Through the ratepayers are getting better value. In Johannesburg, officials responsible for an incorrect calculation of the tax on gratuity payments have been referred to a disciplinary board and money overpaid is being recovered, the report says.

That is encouraging and shows the great value of the Auditor-General’s office in pushing for accountability.

What is abundantly clear is that where there are good controls in place, local government can be made to work. Democratic Alliance-run councils, which account for most of those in the Western Cape, are well run. Year after year they receive clean audits. Something must be at work here; it is professionally run municipalities and accountability.

But much of municipal government in South Africa is built on a model that is simply not fit for purpose. Cadre deployments, over-staffed departments, lack of controls, union demands, and procurement based on Black Economic Empowerment all make for high-cost operations. This helps set off a cycle of decline that gives businesses the push to flee mismanaged platteland dorps and even some large metros.

There is a deep popular dissatisfaction with local government performance. That is why only 30% of eligible voters turned out for last year’s local government elections and the ANC managed to achieve only 46% of the vote. According to Municipal IQ, the number of councils requiring coalitions rose from 26 to 38. These coalitions have yet to prove themselves but are a sign of progress.

But getting rid of party political deployees and the corruption among municipal staff could be a very tricky matter. Councils are restricted in their powers, but the appointment of reliable municipal management would be a good start.

So, what can be done if you are stuck in a town where services have collapsed and the same party that is responsible for the decline is likely to be re-elected? First prize, but unlikely, would be the election of a new party to lead the council. That is why a far higher degree of involvement in local politics is key.

Resorting to a rates-payment boycott might seem appealing based on the logic that if they don’t deliver, we won’t pay. But it could be dangerous. The Organisation Undoing Tax Abuse (OUTA), which has effectively undone e-tolls on Gauteng highways through a payment boycott, believes that any refusal to pay rates should only be thought of as a last resort and only used on a case-by-case basis. If rates are not paid, the assets of those failing to pay could be seized by the council. OUTA says little good comes of a few residents not paying their rates. For political effect and protection of assets, it is probably best to do this on a large and unanimous basis.

There is a great deal of legislation around the payment of rates, making the field a complicated one. Municipalities have a legal mandate to charge rates, and challenging this in court has proved difficult.

Best of all, says Julius Kleynhans, an executive manager at OUTA, is for communities to organise themselves to speak with a communal voice.

That is increasingly what is happening in small towns where service delivery has collapsed. By force of circumstances, business, the community, residents and others are brought together and begin to work on town improvement. There is a long list of towns that have been cleaned up and potholes repaired through the action of the community.

A move by Ignite and Revive Kroonstad has seen considerable improvement in the town. Businesses adopt a traffic island or a park, keep it clean, and are given the right to advertise. In Harrismith, local farmers and volunteers from the township helped restore water.

Private organisations like South Africa Day and the Privilege Foundation help bring business, communities and township residents together to work with councils on turnarounds. One way to start is with cleaning, repair, painting, and planting projects to help signal that a turnaround is under way and restore civic pride. This has worked in Coligny, the town in North West that was on the edge of a racial precipice a few years ago.

Council approval is required for many of these projects, but on the whole this is given, as it helps secure the rates base. Often pothole repairs can be done at a fraction of the price which the council might say is required.

Businesses in small decaying towns have the choice of either fleeing or staying on and being part of a solution. That does mean they are effectively paying rates to the council and also contributing to the turnaround of their towns. They may have no choice, but it means that, in effect, they are facing double taxation.

On paper, there is no lack of accountability for councils, but the enforcement of standards is lacking. Residents and ratepayers have yet to fully exert their power, provincial governments do not enforce accountability, and the national government rarely enforces its will. Change will be required both at national and local level for a turnaround, and given the long delay, that may take a long time. But the power of the Auditor-General and the growing wrath of citizens and business might just be a big part of the solution.