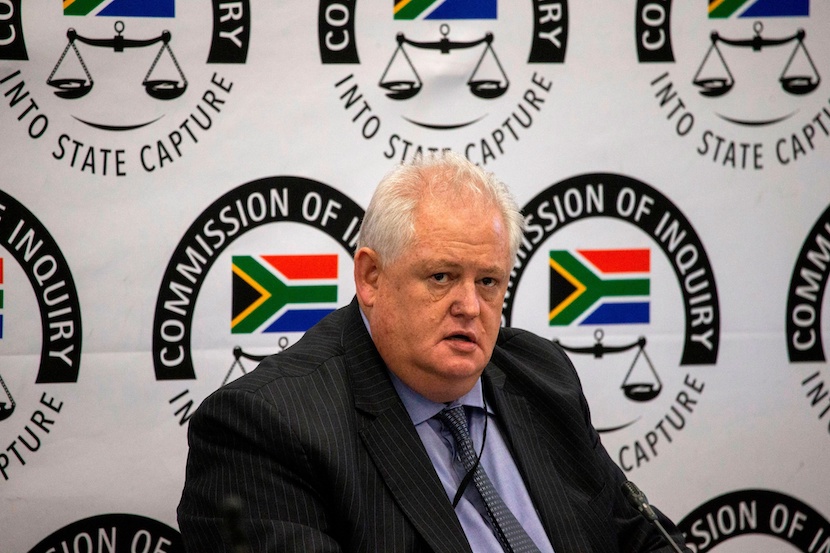 The irony of the dynamite disclosures we publish today is they originated from one of those likely to be embarrassed by what we’re calling the Bosasa Files. After “whistleblower” Angelo Agrizzi appeared before the Zondo Commission, I received damaging allegations from a reliable source about the “real “Angelo Agrizzi. But as my correspondent was unwilling to let anything into the public domain, and as Agrizzi rebuffed repeated requests for an interview, for me the story trail had gone cold. Then the head of News24, Adriaan Basson, called accusing my long-time colleague, the late great investigative journalist Barry Sergeant, of having been “on the take” from Bosasa – something he intended disclosing in a forthcoming book about the saga. Having known and worked with the incorruptible Sergeant for decades, that accusation stretched credulity beyond the limit. And spurred me into asking questions. Starting with Rand Commission whistleblower Kevin Wakeford who was among the many parties accused by Agrizzi of malfeasance. Then Gavin Watson’s brother Valence whom I had met (and respected) many years ago through prior engagements, with a previously critical Sergeant as it happened. And then onto Valence’s son Jared, a chartered accountant, who had been working with his uncle to clear the Bosasa founder’s name. By following the money, it was soon apparent that all was not what South Africa had come to believe. Gavin Watson lived in a two bedroom apartment in Krugersdorp and drove a relatively modest car. His accuser occupies the opulent Palazzio Agrizzi in Fourways, owns a fleet of supercars including five Ferraris, an extremely  valuable art collection and numerous expensive properties in SA and Italy. It all didn’t make sense. But now it does, thanks to the Bosasa Files – documentation which Gavin Watson was due to hand into the SARS tax inquiry on Wednesday August 28th. His body was found in a car wreck two days earlier, a death which raised many questions. I have read the documentation and urge you to do so. Critics say even if he weren’t the puppet master, it was impossible for Gavin Watson, as CEO, not to have known what was going on. Surely he’d have smelled a rat when observing Agrizzi’s lifestyle, his Ferraris and art? The family reckons Gavin and Agrizzi were work, not house friends, and that it was not until 2017 their late brother/uncle visited his former COO’s home. And only when he attended Agrizzi junior’s over the top wedding did his eyes really open to his colleague’s life of excess. Until that point, the family say all they knew about the supercars, for instance, was that Agrizzi spoke of a small share in a single Ferrari, bought because of an obsession born from his father having been a Ferrari mechanic. The Watsons say Gavin was a hands-off entrepreneur whose business had grown from a small catering operation into one employing thousands. He apparently came up with ideas, but in financial matters relied on the advice of others (his highest qualification was matric).  With hindsight, they say, he was naively trusting. Like the rest of his tee-totalling, Christian family members, Gavin is said to have spent more time praying than questioning motives of those around him. There is nothing more powerful than the truth. And when it emerges, much that baffled us starts to make sense. – Alec Hogg

Self-confessed felon Angelo Agrizzi’s appearance at the Zondo Commission in January appears to have been the final piece in a carefully co-ordinated plan more than a decade in the making.

Agrizzi kept a national television audience spellbound as he confessed to paying out R6m in cash as bribes to previously powerful politicians including the former president and members of his cabinet, some senior law enforcement officials and numerous influential personalities.

The former chief operating officer of the since bankrupted Bosasa painted himself as the unfortunate victim of the company’s founder and apparent criminal mastermind, the late Gavin Watson. Agrizzi said his decision to turn whistleblower came after reflection following a near death experience.

But documentary evidence painstakingly compiled over months by Watson and his nephew, chartered accountant Jared, confirms that there is a lot more to a story swallowed by most in  the South African media, and as a result, the public at large.

The evidence, presented as a timeline going back to 2006, was due to be presented to a SARS Tax Commission of Inquiry two days after Watson’s mysterious death. It is published on Biznews today in the public interest and is accessible by clicking here.

The evidence shows Agrizzi repeatedly perjured himself at the Zondo Commission and raises big question about his motives and the timing of his “diclosures”, coming as they did just three months before a crucial General Election.

Agrizzi and his son Giancarlo are shown in the documentation to have enjoyed close ties to the official opposition political party, the Democratic Alliance, which stood to benefit most by his disclosures about apparent malfeasance within the ruling African National Congress.

The Bosasa Files also illustrate that Agrizzi’s decision to turn whistleblower happened after he failed to pry the Department of Correctional Services contracts away from his former employers. His approach to the law authorities also came a month after his final attempt to acquire Bosasa failed – and more than 18 months after his purported near death experience in December 2016.

The documents highlight numerous inconsistencies in the Agrizzi story – ranging from his insistence in paying “influencers” in cash but having no problem in depositing R276,000 through an easily traceable ETF from a Bosasa bank account.

But most of all the Bosasa Files support founder Gavin Watson’s claim that he trusted his management team and Agrizzi in particular with running the business – abdicating authority to them in all operational matters.

This reflects a very different picture to Agrizzi’s testimony to Zondo Commission in which he paints himself as an obedient pawn in the hands of an evil mastermind.

The documents also show Agrizzi had relationships with influential members of the media, including a friendly email from the editor in chief of News24, Adriaan Basson, asking him to check a draft of one of many “expose’s” he has written about Bosasa for some years.

Asked about the Watson claim that he has a close relationship with Agrizzi, Basson called the allegations “total bullshit” adding that the Watsons “are not interested in facts which makes me suspicious about anything they say. Agrizzi tried to impress Gavin’s kids by telling them that I visited him with my kids. I went to his house once for an interview without my kids.”