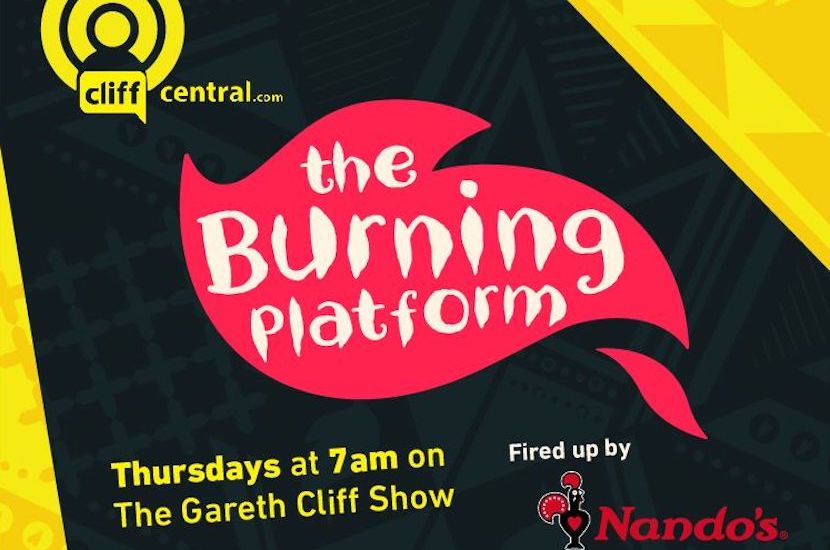 There’s little to beat intelligence and wit, and both Gareth Cliff and Simon Lincoln Reader have these attributes in spades. Satire is also a great condiment to a nourishing debate and these two gentlemen are altering the menu; getting South Africans to talk about crucial issues such as cancel culture and political correctness, and how easily they can cloud vital, nationally important issues, especially at voting time. Besides alluding to how little independent, nuanced thought is practised in today’s emotive vortex of instant media communication, Reader has a crack at two thought leaders in South Africa’s media; gentlemen whom he believes are part of a global woke culture that seizes on defining events to paint a picture he reckons is inaccurate, even dangerously alienating. If recent political commentators on theses pages are correct – that DA leader John Steenhuisen suffers from a lack of profile in comparison to constantly Covid-19-updating Cyril – then Reader has a tasty instant publicity nugget to offer Steenhuisen: sue News24 editor-in-chief Adriaan Basson for accusing him of ‘tacit racism’. Let the public feast on that, giving Steenhuisen the last-minute juicy platform boost he so desperately needs. – Chris Bateman

Systemic wokeness will destroy everything

Last week once quirky Nando’s pulled its sponsorship of Gareth Cliff’s “The Burning Platform” podcast. Nando’s accused Cliff of “invalidating” his guest Mudzuli Rakhivhane’s (OneSA) experiences of racism, but this claim is vacuous, even petty in the wider scope of the discussion (where, outside her ill-positioned comment that was indeed anecdotal and therefore technically irrelevant, Rakhivhane came across convincingly well).

The genuflecting navel-gazer commonly known as Beijing24, whose parent was once slavishly supportive of the National Party, was thrilled with Nando’s decision, resulting in Kommissar Basson and Kommissar Claasen (Anti-Trump Verdeling) meeting up on a Saturday to purchase matching pairs of very pale blue jeans: “Karabo, asseblief koop vir ons een bottle Prosecco.”

The scoffing was audible. Reporting, however, did not examine the context or the objective and deliberately chose click-bait analysis in the form of some incendiary commentary that had featured on Twitter. One correspondent remarked that the problem wasn’t what was said, but that John Steenhuisen and Gareth Cliff are white men – so by this logic, automatically disqualified.

Inevitably excitement got the better of Kommissar Basson: on Monday he used his column to accuse the leader of a national party of “tacit racism”. My advise to John Steenhuisen: sue him. Neither for the money – which he doesn’t have – nor for the correction of record – which probably wouldn’t happen, but for the prominence, as only noise this loud could prompt Naspers into a reckoning that association with this failing platform is like trying to raise Hunter Biden.

In 2003, a YFM DJ with whom I was working on an HIV/Aids campaign sent Cliff a rude email from my computer while I was away from my desk. Courageously or absent-mindedly, the YFM DJ chose to sign off with his own name – but Cliff is no slouch, and responded with some amusing profanities, including accusing the YFM DJ of “having a boil as a head”. But Cliff is a good sport, and we laughed about it some months later.

Even in his early days at 5FM, Cliff appeared to grasp the essence of a nation. That is, its soul is its stories, its music, its conversations. In no time Cliff became a peerless force of cultural commentary, a master story enabler with a formidable grasp of history, whose deployment of satire was timed almost perfectly – if you cannot have the first laugh, his endearing style suggested, there’s no way you’ll ever have the last.

The attempt to partially cancel him is symbolic of a much wider condition. Hundreds of thousands of corporates and media platforms and streaming companies and university bodies are seeing the world as if it were conceived by one brutal event that occurred in America in May 2020. And whilst that issue has been resolved by a jury and subsequent sentence in a criminal court, there remains a prevailing, increasingly intolerant, systematically woke idea that everything – from marketing campaigns to recruitment to content to policy and political statements – must be examined through the unofficial precedent it set.

Which is madness. Few today consider alternative explanations for the response to that incident (probably because they’ve been censored), but it cannot be forgotten that it occurred at the point where much of the world had been prostrated by inhumane lockdowns, where socialisation was discouraged and in some cases banned, where people were frightened and uncertain and seeking meaning. To some extent that was located in the sanctioned violence.

But South Africa did not need to borrow these eruptions of May 2020 to chart a course; its been on its own unique path of understanding, or trying to, since 1994 – restlessly, painfully, with both failure and some success – the latter born out of the efforts of people like Gareth Cliff to stimulate the national conversation. And it has been doing so for the most part despite the destructive presence of a feckless government, incapable of adhering to society’s most basic foundations such as service delivery (the reason for local elections – and discussions with political parties thereof).

You can’t design a mood on artificial ground – as the mounting anger against systemic wokeness reveals. It seems everyday that Big Tech and Big Pharma and Big Kneeling overreach is being scrutinised, and governments, companies, the media and charities exposed for pursuing inauthentic, selective and opportunistic social justice campaigning. Nando’s would be wise to note this, else it end up limited to partnering with Ben & Jerry’s to create a chicken flavoured ice-cream, aggressively advertised on Beijing24. Gareth Cliff did nothing wrong.