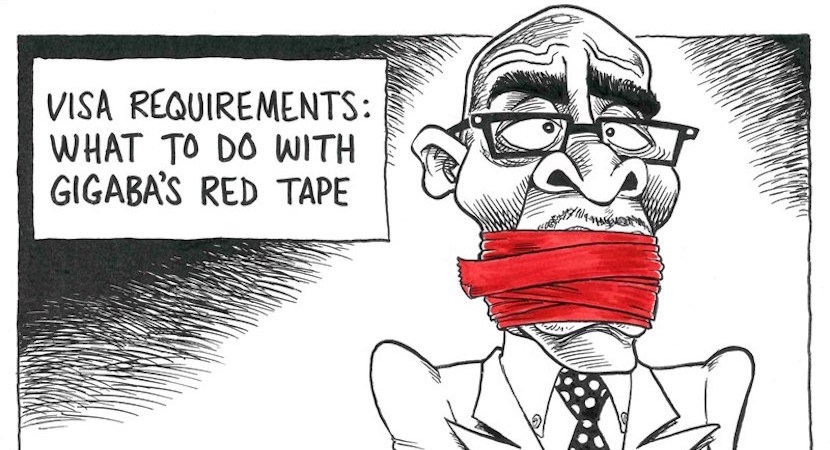 JOHANNESBURG — President Cyril Ramaphosa at a pre-WEF briefing in Johannesburg on Wednesday morning spent a good 15 minutes addressing some sharp issues relating to the controversy surrounding expropriation of land without compensation, the independence of the Reserve Bank and what appears to be the unresolved child-visa disaster (which is reportedly still a major hindrance for travellers to South Africa, despite assurances from Ramaphosa that this wouldn’t be the case any longer). In many ways, Ramaphosa, once again, tried to ease markets by saying that land EWC will just involve clarification of what already exists in the Constitution. The problem here is that the process is largely in the hands now of ANC and EFF MPs, who have shown themselves to be unpredictable. Ramaphosa also promised that the independent mandate of the Reserve Bank won’t change despite calls of nationalisation from the ANC. And then he addressed those pesky child visas. Take a listen… – Gareth van Zyl

Davos 2019: this coverage of the Global conversation on Change is brought to you by BrightRock, the first ever needs-matched life insurance that changes as your life changes.

Below is a transcript of President Cyril Ramaphosa addressing several concerns raised at the pre-WEF briefing in Rosebank on 16 January 2019:

Our party (the ANC) has expressed a wish and an aspiration acknowledging that the Reserve Bank is independent. It’s independence is sacrosanct and that there is no intention whatsoever to tamper with the independence of the Central Bank. That wish that is expressed is as it goes ahead with its monetary policy machinations and policy directives, and decisions made – it should also keep an eye on the issue of employment. Now, you will be pleased to know that the Reserve Bank will tell you that is precisely what they also focus on. They will tell you, if I was the Governor of the Reserve Bank, and we’ve got the eighth governor of the Reserve Bank here, as Minister of Finance (Mr Tito Mboweni), they will tell you that that’s precisely what we focus on as we go on with our monetary policy type of work.

So, there shouldn’t be anything that alarms anyone. It would be alarming if the governing party had said, we want to re-examine the mandate of the Reserve Bank. That would have been alarming. But the wish, that aspirational message that is being put across is as the Reserve Bank, as you come up with your monetary policy statements and decisions, keep an eye on employment. The governing party is essentially saying, we’ve got a built-in platform with regard to employment and we would like everyone to focus on the creation of jobs. Clearly, there is nothing wrong with that.

The same thing is being debated in other places in the world, in Europe, in the USA – people keep on expressing their wishes. But as long as we are clear and this I can say without any incrimination, the independence, the standing, and the role of the Reserve Bank is sacrosanct – it will remain independent as clearly stated in our Constitution. So, there should be no debate about that. As people say, we would like more employment, we should not be alarmed and, in fact, we should say, [we agree with you. We would like more employment and all of us, in whatever we do, should keep an eye and focus on that.

Rob Shuter, you are absolutely right. Our journey to Davos is really to go and mobilise investment for our country. We are competing with other emerging markets and we want SA to be well positioned, and that’s precisely what takes us to Davos, because it’s an oasis of foreign investment and that’s where we want to be seen to be playing. SA has a place of some pride in Davos – we are recognised and accepted as being a serious player and some of our country’s men and women also play roles in the structures of Davos, and that is to be welcomed. So, we’ve got to be there and when we go, we must speak with one language and one message.

Yes, we should also be to articulate a message that is coherent on, let’s say, ‘land reform.’ Now, if you go through the manifesto of the governing party you will see that the issue of land reform is clearly and well-articulated. The ANC conference took a decision, a decision that has been debated quite extensively across the land and demographics of the country, and in some ways the debate and the discussions seem to be dividing the nation. But it was a widespread discussion issue, which involved all sectors of society. People in urban areas and rural areas, both rich and poor, landowners and non-land owners. But in the end the report has now been submitted to Parliament and Parliament has now taken a decision that, yes, the Constitution should be amended and even that issue of amending the Constitution is just really so that we all understand. It’s just to make it abundantly clear that the issue of expropriation of land without compensation has always been part of the Constitutional construct that we had and it is just to make it clear.

Now, the manifesto of the governing party has even taken it further. The governing party has now tabled the Expropriation Bill, which is going to be debated in Parliament, and if you read that Expropriation Bill very carefully you will see how the expropriation process will take place. The various steps and measures that will be taken and which land will be liable for that type of expropriation and already the Bill is saying, ‘we are going to be looking at State-owned land, land that is owned by various sectors of the Government, abundant land, and land that is not being used etc.’ So, categorisation of the land that could be liable for expropriation is then set up and a process [put in place].

The manifesto of the governing party goes further to say, ‘as we go on with land reform, we will be utilising expropriation of land without compensation as one of the measures that can be used.’ This is not wholesale. This is not what people have always feared that there’s going to be a wholesale, vengeful type of expropriation of land. It is going to be done in line with the decision that was taken at NASREC. The decision at NASREC was that as you proceed with this process of land reform, take care that agricultural production must not be reduced. Full security must be ensured, and it must lead to a greater growth of the economy. It must not negatively impact the economy.

So, you’ve got constellation of really wonderful initiatives that can be taken on that. In the end, the Freedom Charter said land shall be shared amongst workers so, there is no vengeance. There is no vengeful intent on the issue of land. What it has succeeded to do, and this is what I’ve also been explaining to all and sundry, to people who don’t live here – what it has succeeded to do is to actually put the issue of land on the front of the national agenda. And the good yield that we’ve got out of this is that landowners, with their farms, with their companies coming forward and saying, we now realise how important this is. We now have portions of land that we want to put in the pot that the land can be made available to our people as a whole.

But what it has also done, ladies and gentlemen, is to actually, if you light a fire under Government to ensure that Government speeds up the restitution process because a number… huge tracks of land have been laying at the bottom of their drawers without even paying any attention. Now, the files are out. Attention is being paid to them and we are doing, and are going to be doing the land reform process in line with the Constitution of our country. We will not depart from utilising the clear prescripts that are enshrined in our Constitution. We’ll deal with them, one – at a political level, we will not allow land grabs. That is not going to happen.

The land reform process will not be underpinned by vengefulness, where our vengefulness we go and grab land. It will be done in a most orderly manner and it will be done on a collaborative basis. This is part of our DNA. That’s how we do things here, in SA. The fact that a number of both international and local companies made their commitments and investment of this demonstrated to me that as much as the land that was going on – it was not a barrier. It wasn’t a barrier because we’ve been able to give the necessary assurances. We are not going to cut off our noses to spite our faces. But what we are going to do is to divulge the interests of people, when it comes to the land issue.

On policy certainty, we have said ad nauseam that we are going to address all the issues that militate against policies such as this. And we have started the process and, in some cases, there may be starts and stops. There may be challenges. One of those was of the ‘visa regime’ and one of the businesspeople who were here actually said to me, ‘it’s not working as well as you had announced.’ I said, ‘let us sit down and discuss it to see where there are gaps, where it’s faltering.’ So, that we address this because the intention is quite clear – we want to clear the visa thing, while these are challenges and we want to open our country up for people who want to come as tourists, who want to come on visas and visit as businesspeople but still have the necessary controls for safety and security in our country.

On policy certainty, we are determined to address all the challenges, and the spectrum issue – that is being addressed. There may well be some wrinkles and where there are wrinkles, we are saying, let’s sit down and address and iron out all those wrinkles. Remember that we are Government and Government tends to move very slowly on a number of issues. But what I draw strength from is that we’ve got partners, we’ve got interlocuters if you like, we’ve got fellow travellers who are willing and prepared to discuss matters with us and it is in this spirit that I believe we should be addressing matters. Even on the Eskom issue – we are going to be engaging with many of you about the challenges that we are facing in Eskom.

We are that type of Government, one that listens, engages, and wants to build a very collaborative type of process and this is precisely what I said when I became president that where you might have felt as businessmen, as key stakeholders in the country that the way to talk to Government was closed and blocked. We are going to open all that. We are going to open so that we can engage and engage seriously because my intention is to involve many South Africans in putting forward views and ideas about their country and what should happen in their country. We are not an empire. We are a republic. A republic that wants to define itself as a country where South Africans can engage and it is for that reason that we said, we want an active citizen. You cannot have an active citizen if you are not going to engage and this is what I believe is the strength that we have as SA.