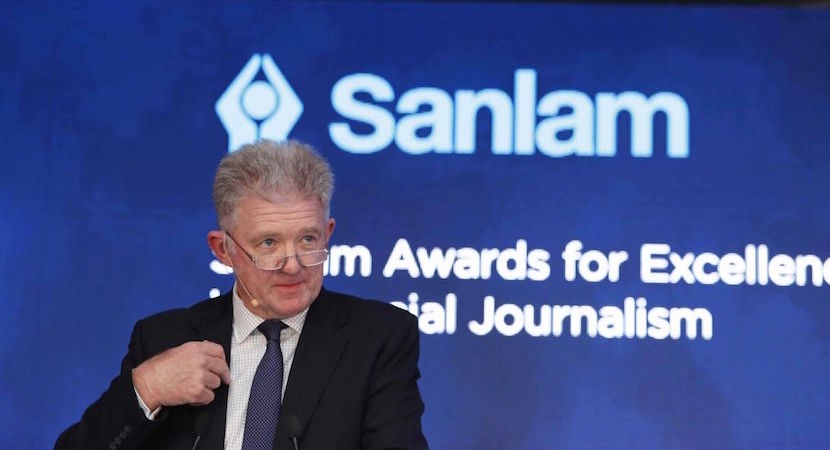 CAPE TOWN — When the chief exec of a company that has built an empire assessing risk talks about creating certainty, you’d hope the ruling party, grappling coarsely with SA’s first recession in nine years, will listen. The current state of flux and political volatility that sees the rand total decline against the dollar this year at 19%, making us the third-worst performer of 31 major and emerging market currencies needs to quickly be stabilised with more policy certainty. President Cyril Ramaphosa’s reply to Sanlam CEO Ian Kirk would probably be that, that is exactly what he’s trying to do with the land seizure amendments to the Constitution – let everyone know exactly where they stand. Well, the clumsy and allegedly legally hugely shaky Draft Mining Charter amendments are adding to SA’s economic woes while rhetoric around nationalising the Reserve Bank hasn’t exactly helped. Kirk is urging government to tone down any legislation or policies that have got investors nervous and to single-mindedly deal with the most pressing problems, one by one. – Chris Bateman

(Bloomberg) – The South African government must provide policy certainty and tackle its problems one at a time if it is to pull the country out of its economic malaise, according to Sanlam Ltd. Chief Executive Officer Ian Kirk.

Africa’s most industrialised economy tipped into its first recession in nine years in the second quarter as President Cyril Ramaphosa tries to restore confidence battered by almost nine years of misrule by his predecessor. It also comes as the ruling African National Congress pushes changes to the constitution to make it easier to seize land without compensation and uncertainty lingers over mining rules that have hindered investment.

“When you’re in the situation that we’re in, you have to have a single-minded purpose,” the CEO of Africa’s largest insurer by market value said by phone on Thursday. “Anything – any policy uncertainty – that causes a negative on investment flows, investor confidence, consumer confidence is just something for another day.”

The ANC’s talk of land reform has drawn criticism from the main opposition party, agricultural lobby groups and even the Congress of South African Trade Unions, the country’s largest labour federation and one of the governing party’s main allies. Government data show more than two-thirds of farmland is owned by whites, who constitute 7.8 percent of the country’s 57.7 million people – a status quo rooted in colonial and white-minority rule, which ended in 1994.

While it was important to address inequalities in the distribution of land, the state has to prioritize inclusive growth and job creation first by cementing policy certainty, Kirk said.

Ramaphosa’s administration should work with the private sector to regenerate investment, he said. The “Ramaphoria” that buoyed the markets and the public at large after Ramaphosa engineered Jacob Zuma’s ouster as president in February has long since faded, with the rand weakening amid souring sentiment toward emerging markets. The rand has declined 19 percent against the dollar this year, the third-worst performer of 31 major and emerging-market currencies tracked by Bloomberg.

“It will take some time for improved business and consumer sentiment in South Africa to translate into accelerated economic growth,” Sanlam said in a statement on Thursday announcing its first-half earnings. Sanlam will seek to accelerate organic growth initiatives and projects like a venture with Capitec Bank Holdings Ltd. selling insurance, it said.

The Cape Town-based insurer reported a 10 percent increase in adjusted earnings and a return on equity of 18 percent, above its 13 percent target. The company expects to get regulatory approvals to take full control of Morocco’s Saham Finances SA by the end of the year, Sanlam said.

The deal, Sanlam’s biggest-ever acquisition, will require total funding of R13 billion ($845 million), Sanlam said, part of which will be paid for by the sale of 5 percent of its stock. The deal will give Sanlam access to Saham’s 26 markets across North Africa, the Middle East and West Africa and builds on its business that spans 11 African countries, India and Malaysia.

“We’ve seen pleasing results from Saham,” the insurer said. “We have positive expectations with this investment going forward.”