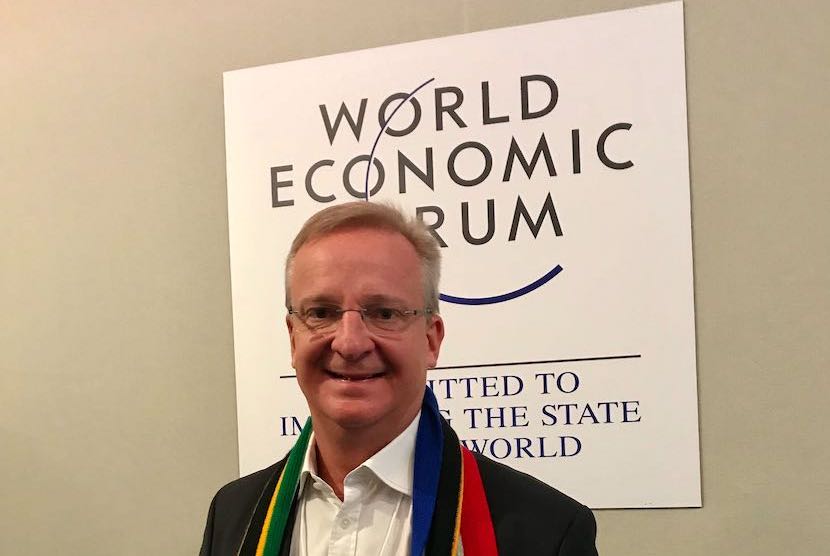 Finance Minister Tito Mboweni responded this morning to criticism from the business sector attending the World Economic Forum meeting in Davos Switzerland about the pace of structural reform of the economy saying that a process like this does take time. Mboweni also questioned whether the “business confidence forms” were actually being filled in by the Chief Executive Officers of the companies or by their staff. Responding to this Nedbank CEO Mike Brown said there are good starting points but what business wants to see is delivery, such as Mboweni’s strategic plan from Eskom, which will give more certainty. – Linda van Tilburg

This coverage of the global conversation on change is brought to you by BrightRock the first ever needs matched life insurance that changes as your life changes. I’m talking to Mike Brown the chief executive of Nedbank. The minister today didn’t seem to like the criticism that the business community gave, saying things are taken too long.

Yeah. There is a process to begin structural reforms, the National Treasury’s paper on growth in South Africa has good starting points but what business wants to see is delivery. So for example, it’s great that we’ve got a new chief executive at Eskom but what we actually want to see is his strategic plan for Eskom emerge, which gives business more certainty as to the availability and price of electricity going forward. The minister speaks about the necessity for fiscal discipline and refers to the budget, so we want to see the budget. I am sure that when we do see it, what he has said will become evident. We have moved too slowly – in particular this last year – and I think what he’s saying is that government is looking to accelerate this year and we hope that they do. We hope that we see evidence of that in the near term.

He said this is not the place to do deals – talking investment – do you find that?

Davos for me is an amazing networking opportunity. 3,000 of the top officials from governments and businesses gather in one place. It’s also an amazing opportunity for mental stimulation listening to some of the smartest people in the world. It isn’t actually a place where deals get done – in my experience – but it is a place where the relationships that are needed for deals to get done can be cemented. So for example, just from a Nedbank point of view, I met a number of the chief executives of some of the global multinationals that we do business with on the African continent here. Usually we meet with their representatives in Africa. This gives you an opportunity to meet their global chief executives. There are a couple of deals that are currently underway at early stages of discussion and if I can have the conversation with the global chief executive about that deal, it does help the probability that it will become executed in time.

It is said that there wasn’t the excitement this year, which is probably a good thing because you could get down to serious conversation with people. Is that what you found?

Yeah, South Africa is – as a country – a turnaround story and at the early stages of the turnaround story, I think last year, or the year before, there was an expectation that the turnaround would happen faster than is currently the case. Actually, what we’ve discovered in the last two years, is that the damage done to our economy over the last 10 years is greater than many of us thought and that means that the turnaround is going to be slower. That is now a reality in front of all of us. So the conversations are much more grounded in that reality, rather than the expectation of a quick bounce.

At Nedbank this year there were job losses and you had to close branches?

It’s a very difficult environment for our customers. We think that GDP growth this year is going to end up at about 0.3%, at the beginning of the year we thought it would be closer to 1.5% and in that very difficult environment – you can see in the newspapers what’s happening to our customers – they’re battling for growth, they’re downsizing and banks, probably more than any other entity, are a reflection of the macro economic environment in which they operate. So if our customers are battling it’s going to be difficult for us to grow revenues, bad debts in the banking sector are going to increase and alongside that, what we find is an increasing number of our customers are digitising, transacting with us but not through a physical branch channel. The key strategic imperatives for a chief executive of any bank is to make sure that you balance the investment that you have in your channels. Our channels would be a branch channel, an Internet channel, a mobile channel and a call centre channel. How do we balance the investment across those channels, with where the customer activity is shifting over time. As more and more customer activity shifts to the Internet and mobile channels, inevitably we’ll have to invest more in those channels and invest less in the physical channels.

And the competition is great. There are these nimble new digital banks and big tech is also doing banking. How do you cope with that?

Yeah, it’s an incredibly competitive environment. It’s actually a great environment to be a customer and quite simply the only way that an organisation like Nedbank can compete is to make sure that we also invest consistently in our technology. Nedbank right now is investing about R2bn a year in our technology to make sure that our customer experience is better than any of the new competitors or tech companies out there.