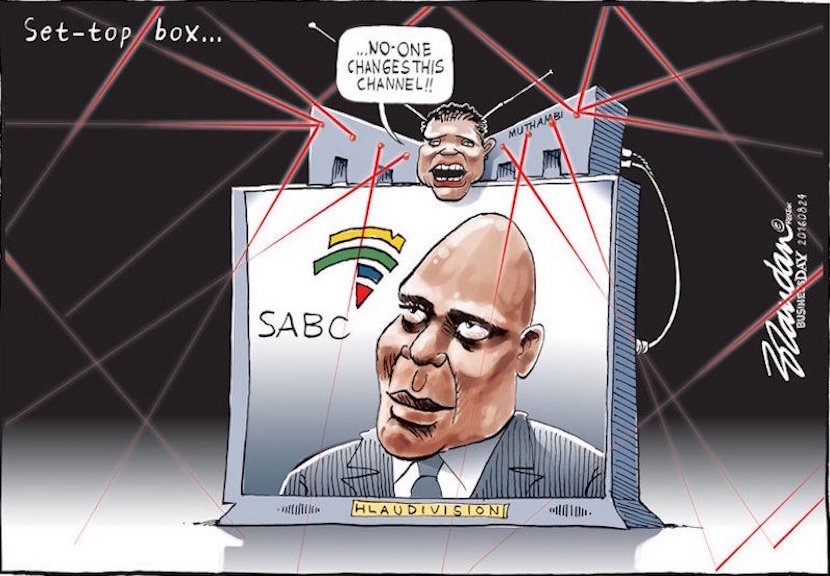 Controversial SABC boss Hlaudi Motsoeneng has hit back at powerful players within the ANC, in particular ANC parliamentary chief whip Jackson Mthembu and Minister in the Presidency Jeff Radebe, for questioning his right to continued employment at the national broadcaster. In another display of shameless arrogance, Motsoeneng has issued an “open letter”, slamming senior politicians and creating his own narrative on how court rulings must be understood. He accuses Mthembu as being part of a “political mob” – which includes politicians, “reactionary” media and anti-transformation NGOs – and as being ignorant about the law. He also moved to demonstrate that he was amply qualified to lead the SABC and has, he indicated, already demonstrated an impressive track-record in transforming the organisation to the benefit of the previously disadvantaged. Hlaudi Motsoeneng last week astonished the nation with a series of comments about himself – ranging from his ability to “perform miracles” to his promise to have many parties at television licence-payers’ expense. The propaganda czar’s open letter is another “two-fingered” salute to ANC politicians who believe they might hold more influence than he does. – Jackie Cameron

Cape Town – Some politicians have “not bothered to read or understand” court rulings against him and have undermined these through “legally suspect interpretation”, former SABC COO Hlaudi Motsoeneng said in an open letter on Sunday.

“Members of our society have been thrown into a frenzy of speculation about court rulings which the DA and some politicians have not bothered to read or understand,” Motsoeneng said in the letter hitting out at his detractors.

He referred to the DA’s urgent interdict application in 2014 to have him suspended, pending a review of the decision to appoint him.

He also made mention of the court judgment relating to his appointment as permanent COO last year.

In November 2015, the Western Cape High Court Judge Dennis Davis found Motsoeneng’s appointment was irrational and unlawful and set it aside.

“Judge Davis… declared my appointment as COO while there was an outstanding disciplinary proceeding to be ‘irrational’ and unlawful,” he said.

“Contrary to the contrived assertions by the politicians and sections of the reactionary media, the judge expressly ruled that ‘this case is not about Mr Motsoeneng’ and refused to preempt the disciplinary proceedings.

“Judge Davis unambiguously ruled that the outcome of the disciplinary proceedings could not be ignored when it came to the permanent appointment of a COO of the SABC – if I were acquitted of all charges I would qualify for consideration. That is something my detractors cannot live with.”

He further quoted Davis, “‘Much has been made by respondents of Mr Motsoeneng’s achievements at the SABC and his ‘unique’ ability to be the COO of the SABC. If it is properly shown that none of the allegations made against him are sustainable, it would be unfair and, hence premature at this stage, to preclude him from such consideration. In summary, it is preferable to allow the relevant disciplinary proceedings to run its course and to reflect this finding in the order’.”

Motsoeneng said it was “an outrageous act”  for the ANC’s chief whip in Parliament, Jackson Mthembu, and Minister in The Presidency Jeff Radebe to “mislead the public by implying that there is an adverse court judgment against me”.

Mthembu last week called Motsoeneng a “non-employee” who was given the post without due process having been followed and called on the SABC board to rescind the appointment.

Radebe said the SABC board had reappointed Motsoeneng to an executive position through “legally suspect interpretations”.

The tragedy of the #Hlaudi #SABC conundrum is that come 2019, the ANC will blame "clever blacks" for its inevitable electoral losses.

“They concocted their own phantom judgment and falsely impute words to our judges in a manner that impugns our judiciary,” Motsoeneng wrote.

“One wonders what legal yardstick Minister Radebe or Hon. Mthembu are using to arrive at their outlandish misreading of this very clear court ruling [of Davis]. Even worse, their contrived misreading deliberately ignored Judge Davis’s scrupulous observance of the rules of fairness and due process.”

He accused them of “[substituting] the carefully reasoned court judgment with their prejudiced pronouncements”.

“Such politically-driven public vilification campaign and unlawful removal from my employment will be vigorously resisted and challenged in court if need be.”

Motsoeneng said “fair-minded observers” would know that no court had ruled that he was “not appointable as COO or unqualified for senior executive positions at the SABC”.

“All extant court judgments ordered that a disciplinary tribunal must be convened to adjudicate the raft of allegations levelled against me. The SABC complied and in December 2015 I was cleared of all charges against me after an internal disciplinary hearing ordered by the courts.

“Both Minister Radebe and Hon Mthembu have relied on an alleged SCA judgment for their attacks on the SABC and violation of my constitutional rights. In September 2016, the SCA dismissed SABC and [Minister of Communications Faith] Muthambi’s application for leave to appeal Judge Davis’s ruling that my permanent appointment as COO should be set aside.”

He said the application for leave to appeal was dismissed with costs on the grounds that there is no reasonable prospect of success in an appeal.

“Hon. Mthembu and Minister Radebe have opted to ignore the court judgments and the disciplinary ruling in which I was acquitted in their calculated tactic to subject me to torture of public condemnation.  For a member of parliament, Hon Mthembu has made an alarming and very embarrassing claim which betrays his ignorance of basic labour law.”

Motsoeneng said the public broadcaster had complied with the order for a disciplinary process and he was acquitted.

“In any event, no rational person can claim that the SCA decision upholding a Davis ruling that my permanent appointment as COO before a disciplinary hearing was unlawful would automatically preclude me from employment as Group Executive for Corporate Affairs, a position I previously held.

“Unfortunately politicians such as Hon. Mthembu have created a quandary for the SABC – they urged the broadcaster’s board to abide by the SCA ruling but assiduously avoid the wording of the exact ruling relied upon.” – Fin24

Cape Town – Former SABC COO Hlaudi Motsoeneng in an open letter on Sunday said his “bold and uncompromising steps” toward transformation in the broadcasting industry had attracted critics and supporters and was not appreciated by those outside the public broadcaster.

“It is not debatable that I have championed transformation in and out of the SABC in an attempt to create equity. I have radically implemented gender equality in the [executive committee],” he wrote.

In his letter, in which he calls for the “politically motivated assault on [his] Constitutional rights” to end, Motsoeneng said he was aware that his transformation efforts were “not appreciated by many outside the organization who selfishly continue benefiting from these ever green supply arrangements”.

He pointed out that he had initiated the 90% local music initiative to empower local artists as well as the 80% local content rule across the public broadcaster’s TV channels.

“I’ve enforced the supply of local content by emerging production houses and, more importantly, those owned by persons with disabilities. I’ll continue to drive the transformation of supply of IT infrastructure to bring black suppliers in the fold. I have also advocated for all languages to be treated equally on all the SABC platforms,” he said.

Argument that Hlaudi continues at the #SABC for "transformation" reasons is hot rubbish. Plenty qualified black people who can replace him!

Freelancers’ employment contracts were also extended from one to three years, and those who work more than 40 hours per week are now permanently employed, Motsoeneng wrote.

“I have engaged academia and have presented lectures on leadership and transformation in business schools, for example [the] University of Witwatersrand, Regenesys and the University of Limpopo,” he said.

“Parts of my public lectures were incorporated in the curriculum as a Professional Certificate in Government Communications and Marketing by the Wits School of Governance.”

Motsoeneng said “exceptional circumstances” had prompted him to write the open letter.

This was after the ANC’s chief whip in Parliament, Jackson Mthembu, was quoted by City Press as saying that the public broadcaster’s current board was likely to be dissolved following its decision to reappoint Motsoeneng in an executive post. – News24