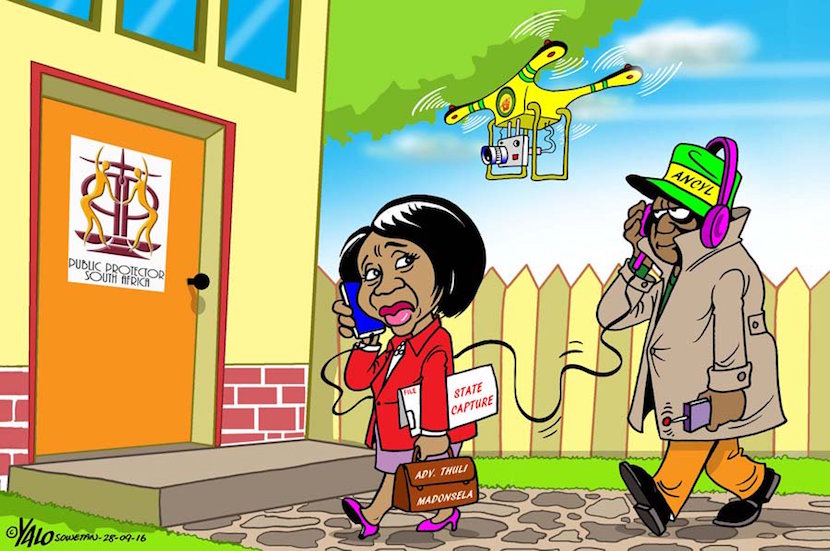 Thuli Madonsela is a heroine to many South Africans who believe she is a force for good in an environment in which irregularity flourishes, but the ANC Youth League have accused her of trying to topple President Jacob Zuma. The outgoing public protector needn’t expect a quiet departure from office this week. The ANCYL has threatened to force Madonsela’s predecessor to immediately make available full telephone records so that they can examine who has been contacted. The ANCYL’s comments follow a chilling threat from the rich Indian Gupta family – close to Zuma’s family – that Madonsela puts their names on a report on state capture at her “peril”. And, President Zuma’s lawyers have asked to question the witnesses who have shared their testimony with Madonsela. One conclusion to be drawn from the ANCYL’s bizarre allegations against the woman who has stood her ground against the country’s most powerful is that Madonsela must have her finger on damning evidence and some people are shaking in their socks at the prospect of what comes next. It is starting to look easier to discredit the investigator than disprove allegations. It takes a brave person to stand their ground against the type of intimidation, menacing threats and appalling allegations that Madonsela has faced in her time in South Africa’s most lonely office. – Jackie Cameron

Referring to her as a “national drama queen with low self-esteem”, national spokesperson Mlondi Mkhize said they would be using the Access to Information Act to force the newly-appointed Public Protector to immediately make details available of the telephone calls made by Madonsela.

They accused Madonsela of trying to topple President Jacob Zuma.

They also called for Madonsela to honour Zuma’s request to interrogate some of the witnesses who gave evidence in the state capture probe.

“Her confidence is only boosted when she sees herself vandalising the name of the president on TV and in various media platforms,” Mkhize said.

They accused her of wasting taxpayers’ money and leaking information to the media regarding her interactions with Zuma.

The ANCYL statement on Thuli Madonsela is must read. If only for the language used.

They were disgusted with her overzealousness, the ANCYL said.

“Her term of office has been characterised by efforts aimed at manipulating the media using the president as a tool. Unsuspecting journalists and media houses have elevated her into a national drama queen, a status which will come to an end on October 15, 2016.”

Her behaviour could not go unchallenged, they said.