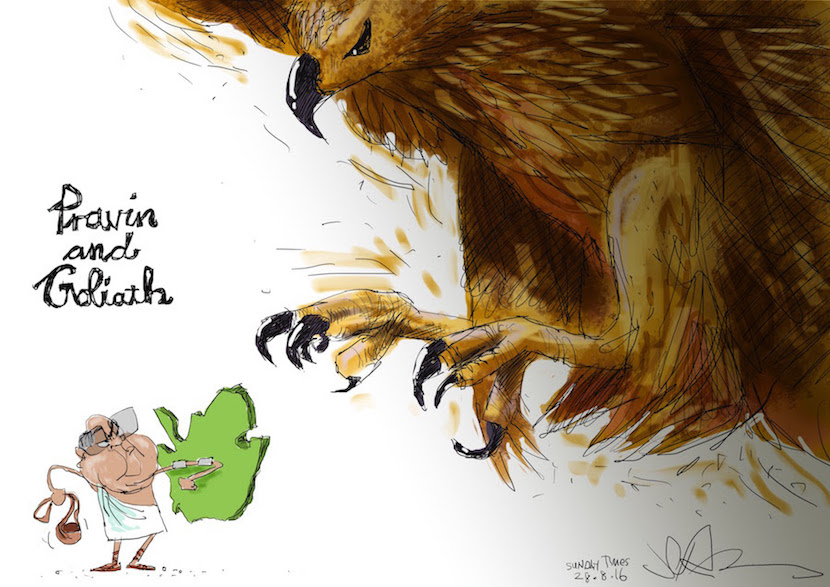 The Hawks, hypersensitive to a growing public belief that most independent investigations and prosecuting authorities are as ‘captured’ by the President’s office as Zuma allegedly is by the Guptas, are all in a flap. Hawks spokesperson Brigadier Hangwani Mulaudzi went on the media offensive, picking apart a Sunday Times report that his flock is descending on Deputy Finance Ministers Mcebisi Jonas, ANC secretary general Gwede Mantashe, and ANC treasurer Zweli Mkhize. He said it was an ‘absolute distortion,’ that the trio were under investigation for not reporting the R600m bribe and finance minister post offer by Ajay Gupta to Jonas in March. As much as logic and reason tempt one to believe the Hawk’s refutation, (no actual money changed hands), it’s symptomatic of the country’s moral morass that the fraud part of this story got such purchase. Especially with the NPA now having a second crack at at Finance Minister Pravin Gordhan over the “rogue’’ investigative unit that operated while he was in charge of Treasury. It’s clear there’s no stopping all the president’s men, entrenched in virtually every position that matters when it comes to preventing the president and his cabinet from being held fully accountable. – Chris Bateman

Hawks spokesperson Brigadier Hangwani Mulaudzi dismissed as a “distortion” a Sunday Times report that the trio were being investigated for not reporting the R600m bribe and the offer of finance minister post Ajay Gupta allegedly made to Jonas in March.

“How do you investigate someone who should be commended for what he has done?” Mulaudzi asked.

“As far as I know [the Prevention and Combating of Corrupt Activities Act] compels anyone who may have gone through any form of corruption to report it. That report will then be given to the NPA and forwarded to us for further investigation.

“The Directorate for Priority Crime Investigation does not open cases; cases are referred to us for further investigation.”

He criticised what he called a distortion of facts, insisting that the three ANC members were not being investigated.

“There is no investigation.”

In March, Jonas said he had been offered the job of finance minister during a meeting with the Gupta family. This happened two weeks before Nhlanhla Nene was removed.

Mulaudzi says the Hawks would like to commend Jonas for turning down a R600 million bribe. So how is investigation into bribe proceeding?

He said he had “rejected this out of hand… it makes a mockery of our hard-earned democracy, the trust of our people and no one apart from the President of the Republic appoints ministers”.

She wrote on Facebook: “But they had previously asked me to become Minister of Public Enterprises when Barbara Hogan got the chop, provided that I would drop the SAA flight-route to India and give it to them.

“I refused and so I was never made a Minister.”

She said this happened at the Gupta family’s Saxonwold, Johannesburg, compound, and that President Jacob Zuma was in the house at the time.

Former Public Protector Thuli Madonsela interviewed Jonas for her explosive ‘State of Capture’ report after he said the Guptas offered him Nene’s job.

He told Madonsela the family offered him R600 000 in cash at their Saxonwold home.

“How do you investigate someone [like Mcebisi Jonas] who should be commended for what he's done?” Hawks' Brigadier Hangwani Mulaudzi asked.

“During the meeting, there was no exchange of pleasantries. Mr Ajay Gupta informed him that they had been gathering intelligence on him and those close to him; he apparently indicated that they were well aware of his activities and his connections to Mr [Gwede] Mantashe and the Treasurer of the ANC, Dr Zweli Mkhize, alleging that he was part of a faction or process towards undermining President Zuma,” the report states.

Jonas was informed that the Guptas would make him finance minister.

“Jonas reported that he was shocked and irritated by the statement. He declined the position and informed Mr Ajay Gupta that only the president of the Republic can make such decisions,” Madonsela said in her report.

“[Ajay Gupta] mentioned that, collectively as a family, they ‘made a lot of money from the State’ and they wanted to increase the amount from R6bn to R8bn and that the bulk of their funds were held in Dubai. According to Mr Jonas, Mr A Gupta further indicated that National Treasury was a stumbling block to the family’s business ambitions.”

Part of his job, Jonas was told, would be to remove the Treasury’s director general and other key members of its executive management.

“As Mr Jonas was walking towards the door, Mr A Gupta made a further offer of R600m to be deposited in an account of his choice. He asked if Mr Jonas had a bag which he could use to receive and carry R600 000 in cash immediately, which he declined,” the report said. – News24