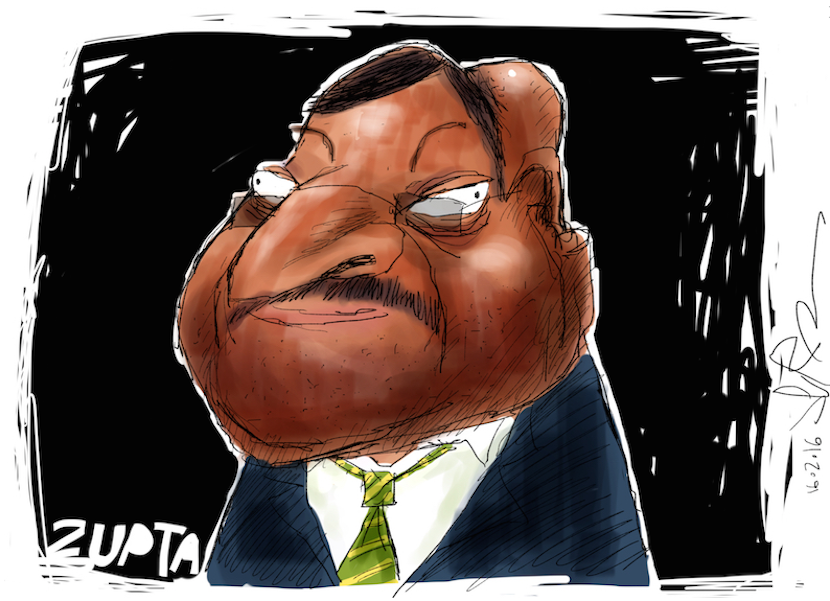 Although many South Africans would like President Jacob Zuma to step down or be removed from office because of widespread financial irregularities and the abuse of taxpayers’ funds, he is clinging to power. This is because of strong support for him from within the ruling ANC and a strategy that has his allies working to protect him across state entities and including within the bosom of law enforcement agencies. Zuma has ignored public outrage over allegations of state capture and has survived votes of no confidence in Parliament, leaving the courts as the primary site of political battles. Mike Cohen of Bloomberg outlines the main court cases involving President Zuma. The common thread is corruption. South Africa’s president has an astonishing 783 charges lined up against his name from before he became the country’s leader. The interests of the immigrant Indian Gupta family, named in the former Public Protector’s #StateCaptureReport, feature in one way or another in five of the six cases. The case against Finance Minister Pravin Gordhan is believed to be a ploy to get him out of the way of the Gupta family’s business interests; Hawks’ boss Berning Ntlemeza and National Prosecuting Authority head Shaun Abrahams are suspected of being used as political puppets in the cases against Gordhan. Zuma, the Guptas, Ntlemeza and Abrahams have all denied wrongdoing, while the case against Gordhan is believed to be on spurious grounds. The big question is whether Zuma will be successfully prosecuted. He has clever lawyers around him and has proven adept at wriggling out of trouble, so don’t hold your breath. – Jackie Cameron

The courts are becoming the main theatre of political battles in South Africa as feuding for power and access to state funds in Africa’s most industrialized economy intensifies.

Opposition parties scored a resounding victory over President Jacob Zuma in March, when the Constitutional Court found he’d breached his oath of office by refusing to comply with a directive from the nation’s graft ombudsman to repay taxpayer money spent on upgrading his private home. Zuma is warding off more allegations — that he accepted bribes, breached the government’s code of ethics and made inappropriate appointments — all of which he denies.

Here’s an outline of some of the key legal battles:

Zuma is appealing against an April 29 High Court ruling that prosecutors erred when they decided to drop 783 charges of fraud, corruption and racketeering against him just weeks before he became president in May 2009. The Supreme Court of Appeal is expected to announce whether it will hear the case early next year. The original lawsuit aimed at having the charges reinstated was filed by the Democratic Alliance, the biggest opposition party, and was opposed by the National Prosecuting Authority.

The DA also filed criminal charges against Zuma on Nov. 15 after a report by former graft ombudsman Thuli Madonsela indicated that he may have allowed members of the Gupta family, who are his friends and in business with his son, to influence cabinet appointments and the awarding of state contracts. The party asked police to probe whether two Cabinet ministers, the outgoing head of the state power utility, the Guptas and several others implicated in the report broke the law. Investigations are ongoing. Zuma may start a court challenge to Madonsela’s directive that he should set up a commission of inquiry into the matter.

In an affidavit dated Oct. 13, Finance Minister Pravin Gordhan asked the High Court to order that he shouldn’t intervene in a decision by the country’s largest banks to shut Gupta-controlled company accounts, as the family demanded, because he didn’t have the authority and the lenders’ actions appeared warranted. His court papers implicated family members and their businesses in 72 suspect transactions totaling 6.8 billion rand ($472 million). The Guptas said all the transactions were legitimate and they’ll oppose Gordhan’s application. A court date has yet to be set.

On Nov. 2, prosecutors abandoned plans to charge Gordhan with fraud for approving the early retirement of a tax agency official and then allowing him to be rehired on a contract basis. They are still investigating whether the finance chief broke the law when he oversaw the establishment of an investigative unit at the time he headed the national tax agency almost a decade ago. Gordhan said all the allegations against him are baseless and being driven by people intent on raiding the National Treasury.

Civil-rights groups Freedom Under Law and the Helen Suzman Foundation filed a lawsuit on Nov. 8 aimed at forcing Zuma to suspend Shaun Abrahams, the nation’s chief prosecutor, and two of his subordinates for filing unfounded fraud charges against Gordhan. The prosecutors deny any wrongdoing, and Zuma says the lawsuit is premature because he has already instituted an inquiry into whether they are fit to hold office. The High Court is due to hear the case on Nov. 24.

The two civil rights groups filed a separate case in March aimed at preventing Berning Ntlemeza from exercising his duties as the head of a police investigative unit known as the Hawks. They argue that his appointment was unlawful and irregular because the High Court ruled last year that he was untrustworthy and had lied under oath. Ntlemeza and Police Minister Nathi Nhleko argue that the courts don’t have the power to determine whether the head of the Hawks is fit to hold office. The High Court is due to hear the case on Dec. 6.