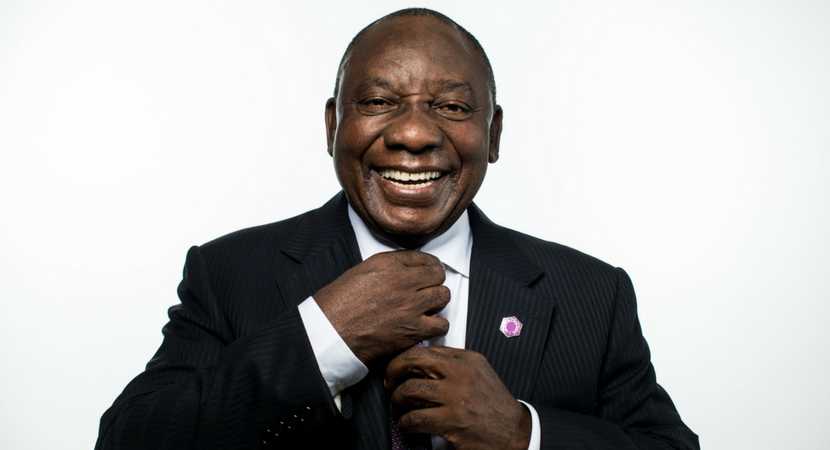 LONDON — It is no secret that the business community in South Africa and investors from the outside are backing President Cyril Ramaphosa. As we emerge punch drunk from years of corruption and the downward spiral that Zuma and his cronies plunged us into, Ramaphosa is a shining beacon of hope. When he appears on the international stage smilingly assuring the investor community that South Africa is a safe place for investment, there is a joint sigh of relief that we have a leader that is heading in the right direction. The general feeling is that he will turn the tide on corruption and with forward looking members of his Cabinet such as Pravin Gordhan and Tito Mboweni he will lead South Africa back to a period of growth. But, are we so fixated on corruption that we are not looking closely enough to where Ramaphosa is actually steering the country? Dr Anthea Jefefry has taken a closer look at what she calls, Ramaphosa’s “supposed reform agenda” and believes that “there is…little reason to believe that Ramaphosa is really a champion of reform”. This article is republished with the kind permission of the Daily Friend. – Linda van Tilburg

Is Ramaphosa really a committed reformer?

Some commentators are pushing for a strong vote for the ANC in the election so as to strengthen President Cyril Ramaphosa and his supposed reform agenda.

However, an ANC triumph at the polls will, of course, strengthen the ruling party and not Ramaphosa.

Even if the ANC wins 60% or more, Ramaphosa will still be subordinate to ANC secretary general Ace Magashule in the party hierarchy. He will still command only a bare majority on the ANC’s powerful national executive committee (NEC).

After decades of mismanagement and corruption, a 60% ANC victory will also confirm that ‘ANC’ stands for ‘Absolutely No Consequences’, as Zwelinzima Vavi (then Cosatu general secretary) said some years ago. So long as it enjoys this impunity, why should the ANC even contemplate reform?

Moreover, when a 60% vote for the ANC is combined with a likely increased showing for the EFF, the two-thirds majority needed to amend the property clause and other core constitutional provisions will have been secured. This will give the ANC yet more reason to press ahead with damaging radical shifts, rather than abandon them.

There is also little reason to believe that Ramaphosa is really a champion of reform. Since actions speak louder than ‘new dawn’ words, the most telling factor is how policy is changing under Ramaphosa’s watch. As yet no significant policy reforms are under way or have even been proposed.

Instead, the Expropriation Bill and Constitution are to be changed to allow expropriation without compensation; the supposedly immutable 26% BEE ownership target in mining has been raised to 30% for new mining rights; the labour minister is being empowered to set damaging employment equity targets for businesses in different sectors; companies which are deemed (on unconvincing grounds) to be too dominant are to be forcibly ‘divested’ of some of their assets; private medical schemes are to be economically crippled and pushed out of operation in preparation for the NHI; the South African Reserve Bank is to be nationalised, increasing the risk of disastrous changes to macroeconomic policy; and prescribed assets for pension and other investment funds are being probed.

All these policy shifts are integral to the national democratic revolution (NDR) the ANC has been implementing since 1994 and is now intent on speeding up. Ramaphosa has never tried to stop the NDR. If anything, he has confirmed his own commitment to it at various times.

In addition, if the ‘actions over words’ test is applied to the pre-1994 period, this shows that Ramaphosa’s commitment to the ANC’s incremental revolution has been in place for 30 years or more.

In 1987, as general secretary of the National Union of Mineworkers, Ramaphosa led a three-week mining strike which was ruthlessly enforced against those unwilling to put jobs and pay at risk. Two non-strikers were necklaced on the first day, while several others were hacked to death, strangled, shot or poisoned with insecticide. At least 18 people were killed, while over 500 mineworkers were injured. No wage gains were secured and striking workers lost R115m in wages and bonuses. But the ANC’s revolutionary cause was advanced, albeit at great cost.

In May 1992, as secretary general of the ANC, Ramaphosa played a crucial part in the ANC’s demolition of the multi-party negotiating process, the Convention for a Democratic South Africa (Codesa).

When Codesa first met in December 1991, it endorsed the ANC’s proposals, thereby earning the organisation’s supposedly fervent support. But in May 1992 Codesa voted against what the ANC wanted on the crucial issue of federalism, over how much power should be devolved to provinces. It also rejected the ANC’s sudden demand that the constituent assembly responsible for drawing up the final constitution should effectively be able to decide its provisions by a 51% majority after six months.

When these issues were put to the vote among the 19 parties represented at Codesa 2, the ANC lost by 11 votes to 8. However, the ANC refused to accept its defeat. Instead, it orchestrated an upsurge in violence around 16th June 1992, in which some 40 people were killed and three deemed IFP supporters were necklaced in Boipatong.

On 17th June 1992 hundreds of IFP members living in the disused KwaMadala hostel – all of whom were refugees from earlier ANC attacks – launched a massive revenge raid on Boipatong in which 45 people were killed. The ANC immediately claimed that the police had helped to carry out the attack. This was a blatant lie (‘fake news’, in today’s parlance), as was later confirmed by both the trial court that convicted 17 KwaMadala residents of murder and the amnesty committee of the Truth and Reconciliation Commission.

Despite the falseness of the accusation, Ramaphosa blamed state president FW de Klerk ‘in person’ for the killings. He also claimed that the police role in the Boipatong massacre had put the whole Codesa process in jeopardy. Soon Ramaphosa and other ANC/SACP leaders terminated the ANC’s participation in Codesa, plunging the constitutional negotiations into   a crisis.

The supposed police role in the Boipatong killings was not the real reason for the ANC’s demolition of Codesa. This lay rather in the fact that the ANC had suffered a humiliating defeat at Codesa 2 and could no longer control the convention’s decisions.

In the climate of outrage orchestrated by the ANC, political violence surged further, with 120 people (many of them IFP supporters) killed within four days of the massacre. In September 1992 came the Bisho killings, in which 29 people – having arguably been led to their deaths by the ANC ‘like lambs to the slaughter’ – were shot dead by the Ciskei army.

Recognising the ANC’s apparent willingness to wade through rivers of blood to gain untrammelled power, De Klerk capitulated. Effectively, he now agreed to what the ANC had demanded at Codesa 2, but had lacked the support to secure. He also agreed to a new multiparty negotiating process which did little but rubber stamp the bilateral agreements the ANC could now force the NP to endorse.

From then on, Ramaphosa’s role in the negotiating process was outwardly increasingly benign. He had nevertheless played a key part in torpedoing Codesa, sparking a further upsurge in killings, and delaying the transition process by at least a year.

Behind Ramaphosa’s smiling visage lay the ANC’s ruthless determination to destroy its key black rival (the IFP), reject the majority decisions reached at Codesa 2, prevent a free and fair election in 1994 – and so secure the ‘prime prize’ of ‘state power’ it would need to advance the NDR in the post-apartheid period.

It is easy to understand the widespread hope for a better future that underpins Ramaphosa’s current electoral appeal. But Ramaphosa has been integral to the ANC’s revolution for more than 30 years. There is nothing in his actions to identify him as a closet reformer who will start rolling back the NDR once the ANC has used him to secure state power for a crucial further five years.