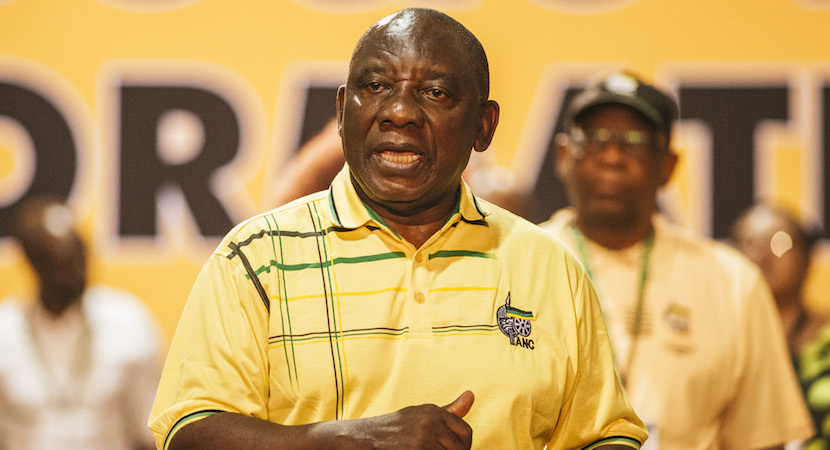 CAPE TOWN — If this story was a burr under the saddle of the ANC horse, it would probably throw its rider. Which would be a pity because the man holding the reins is keeping the party ahead of the field, even though the going gets heavier with each corrupted furlong. Chuck Stephens, Executive Director of the Desmond Tutu Centre for Leadership, takes us on a wild cross-country ride, and like a mounted tour guide, points out the bogs and unassailable fences which stand to entirely halt or disrupt President Cyril Ramaphosa’s steeplechase-like reform. The first obstacle is the widespread belief that the rider and the horse are an inseparable entity, a single being – almost centaur-like. A vote for Cyril is a vote for the ANC. Yes, an increased majority might strengthen his hand, but the horse can still throw him. And there are severe doubts about the overall endurance of this horse, given a decade-long (some would say longer), diet that has left it undernourished, overweight and a shadow of its value-driven former self. Perhaps, like the Catholic Church following decades of immorality by its leading priests, the ANC will experience corporate contrition and act. Not just commission probes. – Chris Bateman

Even for those who are pleased to see a new face in the driver’s seat, can they even bring themselves to vote for the ANC? Every week the Zondo Commission televises more casualties, like the numbers killed and wounded in war coverage. It is getting gruesome. Surely this will cost the ANC dearly.

So even though you may think that Ramaphosa is a breath of fresh air, the Party still stinks. He is making all the right noises about clamping down on corruption and patronage. But as the EFF’s Malema put it after the SONA, that would really mean locking up half of the Cabinet and half of the NEC as well. (Not to mention a few top EFF leaders, too – a subject that he didn’t bring up.)

There is barely a trickle of conviction and sentencing – like ICASA’s Mohlaloga, who got 20 years. There was a suspension by the NPA of Jackie Lepinka – in the wake of allegations arising from the Commissions. It would be a sea change for impunity to end and for anyone even accused to be suspended.  Like Pule Mabe. Then if you are cleared, you can resume your post.

Maybe instead of 15 years, those who turn themselves in and return the loot could get a half-sentence – only 7.5 years?

It seems patently unfair that after all these years, those people are still getting off scot free, while the noose is tightening (so to speak) around the neck of the accused. The strategy of choice is denial. What did the TRC teach us? That commissions have no teeth?

The whole justice system has been affected. Not only was the NPA 100% captured according to the DA’s Maimane, but the SAPS is a mixed blessing. It is not full of double agents, but there is a mix of clean and unclean cops. Too often, the clean ones are the subordinates. There is more urgency in the mind of voters about kick-starting the Justice system than there is about Land Reform.

Catholics are fed up with the immoral behaviour of their priests. But not as much as ANC members are mortified daily by watching new scandals emerge on TV. From Nkandla to the Guptas to Bosasa it has been a wild ride. If you can work around the load-shedding to see the breaking news.

So when the new Finance Minister asked if we really need all these SOE’s, the trending to RET seemed to switch into reverse gear. Organised labour went ballistic and is threatening the ANC with a swing vote. But the DA applauded and said they suggested this ten years ago.

In 2014, Land Reform stole the show. That was the EFF’s debut and it has refreshed a kind of politics that was getting to be boring. The SONA each year turned into a rumble in the jungle. But the Economy has continued to shed jobs. While the population explodes, there are fewer jobs now than there were 25 years ago. This leaves South Africa with the highest unemployment rate in the world. So the key issue for youth is not Land, it is Jobs.

The EFF seemed in a rush to reiterate its seven pillars, but it had no new ideas. Plus its top leaders are implicated, and thus under a storm cloud. The ANC manifesto was confused by an irate Zuma complaining about the phrase “9 wasted years” used at Davos. Anyways, what does it say about the party when it needs to get Zuma out of mothballs for an election campaign?

A somewhat beleaguered Maimane got reinforcements just in time. Msimanga is well-liked and respected for his 3 years as mayor. With Mashaba still mayor of Joburg, the DA looks like it can take the densely populated province. This says a lot because voters like to pick winners, like lottery tickets.

Are you kidding? Chávez? Maduro? They cannot hold a candle to that handsome 35-year old self-proclaimed Alt-Right president Guaidó. With the world’s largest oil reserves, this socialist country was looted and plundered far worse that State Capture in South Africa. Until “our people” have ended up impoverished to the extent that 3m have emigrated. That’s about the same number as Zimbabwe’s exodus. It is an eye-opener to young people, who weren’t aware of the East Bloc’s failures when the Berlin wall came tumbling down. Their focus at the time was on getting Mandela out of jail and ending apartheid. So while youth may admire Ramaphosa’s stick-to-it-ive-ness, they regret that he is leader of the ANC. The “coalition combo” of Maimane and Malema is too compelling. Malema is 37, Maimane is 38. Half of the Electorate is now under 35. Go figure.