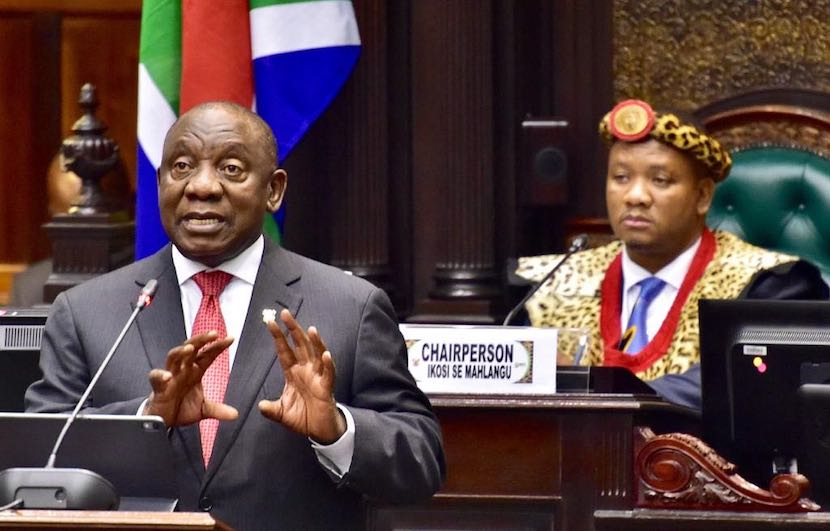 President Cyril Ramaphosa is deeply grounded in the art of negotiation that he learnt first as a trade union leader and in the 90s as the ANC’s chief negotiator. It is a strategy that he falls back on whenever he gets to a sticky situation. With the extremely sticky situation of land expropriation without compensation (EWC), he is again employing his skills to consult, talk and cajole and announced earlier this week at the opening of the National House of Traditional Leaders that he will hold a summit later this year on land and how to deal with EWC. The traditional leaders, especially the Zulu King Goodwill Zwelithini is opposing government’s plans to scrap the Ingonyama Trust that administers 2.8 million hectares of land in KwaZulu-Natal. With South Africa currently being ‘on trial’ because of its state-owned enterprises as Gidon Novick reminded us in an interview with Biznews; international focus is also increasingly shifting to South Africa’s policy of EWC with America’s top diplomat Mike Pompeo warning that the plan could be disastrous. Bloomberg warned days ago that “a failure to respect property rights could result in South Africa violating conditions needed to retain its preferential access to US markets, and may flaunt several international treaties the government has signed.” The Bloomberg analysis was also picked up by the Washington Post. Anthea Jeffery writes in the Daily Friend that property rights are the concrete foundation that underpins South Africa, which has a bigger and more diversified economy, and if you damage those rights, “investor trust will evaporate.” – Linda van Tilburg

Last week US secretary of state Mike Pompeo warned that expropriation without compensation (EWC) would be ‘disastrous’ for South Africa and its people. President Cyril Ramaphosa has avoided any direct response to this critique. A day later, however, the president stated that ‘land reform is an essential part of inclusive growth’, that the government supports the pending EWC constitutional amendment, and that ‘land grabs will not be allowed to happen in our country’.

Mr Ramaphosa seemed to be intent on distinguishing proposed EWC in South Africa from the events in Zimbabwe to which Mr Pompeo had also alluded. But will an absence of violent land grabs – assuming these can indeed be avoided when illegal land occupations are already widespread – be enough to save South Africa from a Zimbabwe-type economic implosion?

A careful examination of what went wrong in Zimbabwe suggests the opposite. The core problem, in the words of Craig Richardson, associate professor of economics at Salem College (in Winston-Salem, North Carolina) and author of a book on Zimbabwe’s collapse, is simply this: ‘The expropriation of land without compensation destroyed property rights – the foundation of the economy – and led to a chain reaction, which was exacerbated by additional action of the Robert Mugabe government.’

As Professor Richardson points out, property rights are like ‘the concrete foundations of a building: critical for supporting the frame and the roof, yet virtually invisible to its inhabitants’. Take them away, however, and the structure no longer stands secure.

Commentators often obscure this key cause of Zimbabwe’s economic collapse. Instead, they speak of persistent drought (not particularly acute in the early 2000s) or economic sanctions (levied on only a small number of Zanu-PF leaders) or lavish spending on military veterans (relatively insignificant) or irresponsible macroeconomic policies in the late 1990s (unwise but not sufficient to put a stop to growth). Some argue that the taking of a mere 4 500 white-owned farms could not have resulted in such widespread economic collapse.

Professor Richardson finds comprehensive evidence, however, that the destruction of property rights was indeed the key factor. In 2001 the constitution was amended to allow EWC, and before long ‘the Zimbabwean government declared itself the owner of all farmland’. What this also meant, of course, was that ‘banks and other property owners now held worthless titles’. Land became what Peruvian economist Hernando de Soto calls ‘dead capital’ because it could no longer be leveraged and used as collateral.

The impact on the banking system and the wider economy was devastating. Writes Professor Richardson: ‘With banks now holding worthless titles and unable to foreclose on properties, 13 of Zimbabwe’s 41 banking institutions were in financial crisis by late 2004. The amount of credit sharply contracted, affecting all sectors of the economy. Gross fixed capital formation, heavily dependent on loans, fell by 43 per cent’ between 1999 and 2001’.

Adds Professor Richardson: ‘Zimbabwe’s conversion from productive to dead capital was now nearly complete. Just as De Soto’s work has shown how developing countries can harvest wealth by turning “dead” capital into “live” capital as a result of titling land and using that property as collateral for bank loans, the case of Zimbabwe shows that these ideas work in reverse as well – with grim results.’

Those ‘grim results’ included a major sell-off of Zimbabwe equities by foreign investors, a massive exodus of farming and other skills, a sharp decline in agricultural and other production, a dramatic narrowing of the tax base, a sudden decrease in the hard currency that agricultural and other exports had previously earned, and crippling shortages of the food, fuel, and medicines that needed to be imported.

As Professor Richardson recounts: ‘Without hard currency in its coffers, the Mugabe government turned to the Reserve Bank of Zimbabwe to pay its bills. Annual money supply growth rose from 57 percent in January 2001 to 103 percent by the end of the year, inaugurating a cycle of devastating hyperinflation.’ Acute food shortages meant the country had to ‘print billions of Zimbabwe dollars to import food’. The imported ink needed to print dollar notes was so scarce that bills were often printed on one side only. ‘By March 2006 it took Z$60 000 to buy one loaf of bread.’

No room for complacency

South Africa is still far away from this haunting tale of woe. But, with the EWC constitutional amendment bill soon to be put before Parliament for adoption, there is no room for complacency.

South Africa has seen little real per capita growth for the past decade. Revenue is down and public debt is set to exceed 70% of GDP by 2022. Foreigners have sold off some R500bn in equities and bonds over the past five years. Fixed capital formation has declined and the construction sector is bleeding, forcing many companies to close.

Business confidence is at a 35-year low. The economy is in its longest downward cycle since 1945. Emigration is increasing and the tax base is narrowing. Property prices have already fallen significantly. Unemployment is inordinately high, especially among the youth.

This economic malaise is generating a sense of desperation. So much so that people with little interest in land reform – only 3.6% of black South Africans see this as the best way of improving lives – are now clutching on to the hope that it may help them. Most do not realise how much the mere threat of EWC is already harming them.

Most people also find it difficult to see how much worse that harm is likely to become. In the words of investment adviser Magnus Heystek at an IRR budget briefing earlier this week, ‘the government is trying to solve one problem by creating a much bigger one’.

When President Mugabe spoke in the late 1990s of taking back the ‘stolen’ land (as the ANC government now also says), he did not tell Zimbabweans that the political elite would benefit the most, that farm production would fall and hunger would grow, that hyperinflation would wipe out savings and buying power, that millions would be forced to flee, that unemployment would rise to 90% – or that political repression would intensify as Zanu-PF entrenched itself in power.

South Africa has a much bigger and more diversified economy and seems intrinsically stronger. But property rights are the ‘concrete foundation’ that underpins its current resilience. Damage or remove those rights and investor trust will evaporate, land will no longer serve as collateral for loans, and people with scarce skills will leave.

The resulting economic implosion is likely to be just as devastating and ‘disastrous’ as the US secretary of state has warned. The notion that ‘inclusive growth’ will follow, as Mr Ramaphosa implies, is nothing but a propaganda ploy to misinform and mislead.