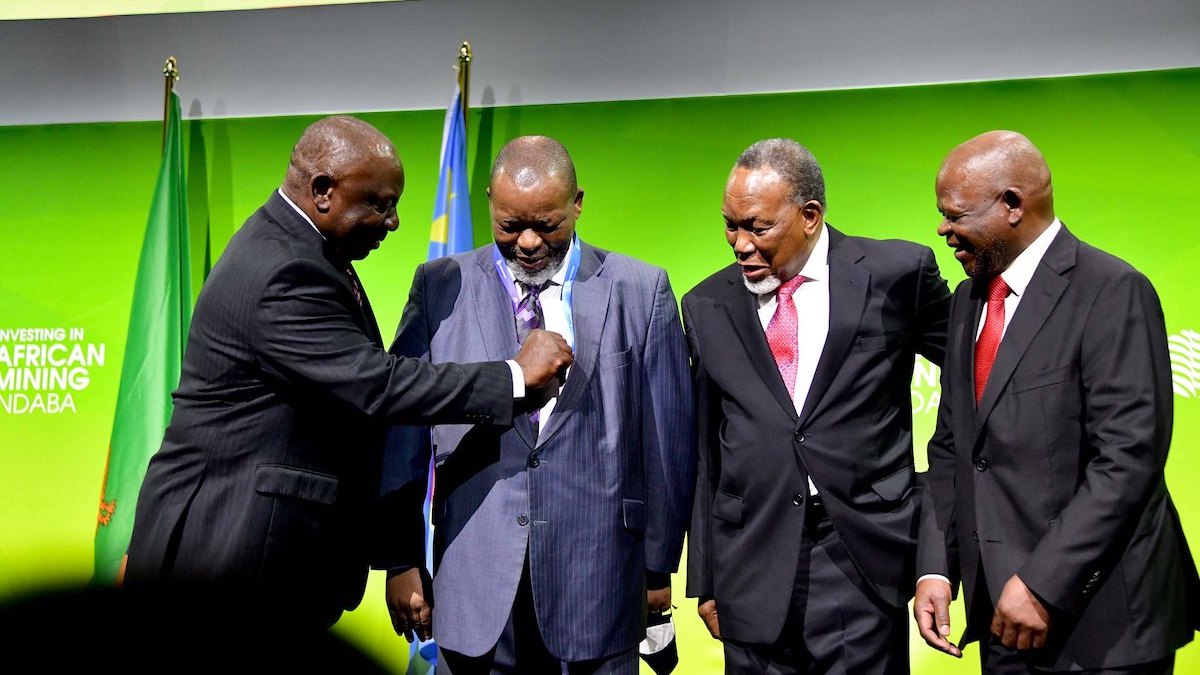 In a week of unprecedented harsh criticism of government by big business, veteran financial journalist Jonathan Katzenellenbogen challenges big corporate CEOs to get specific on red tape-slashing solutions, especially the most hotly contested areas of BEE, minimum wage legislation and privatisation of SOEs. He wants them to tell government what concrete economic reform proposals they’ll bring to the table. Otherwise, they leave Cyril Ramaphosa free to continue with empty, fine-sounding promises while Gwede Mantashe backs unions, threatening beleaguered mining companies and further white-anting the economy. This distillation of big business complaints reveals a gatvol factor we’ve not seen before and seems spontaneous, not an organised campaign as the more paranoid cabinet members might believe. Discovery’s apparent NHI appeasement strategy is questioned in this new context of corporate anger, portraying it as an outlier. A timely and accurate sounding of sentiment, which the government would do well to heed, for everyone’s sake. Story courtesy of the Daily Friend. – Chris Bateman

Business becomes more outspoken: But is the ANC listening?

In the space of a week, a number of big business bosses have taken on the government over the growing red tape, potholes, power cuts, failures at state-owned enterprises, and more. Last year during the hard lockdown, there were a few objections from organised big business, but nothing like what we have heard in the past week.

Power of the state

Big business is still worried about slamming the government as, after all, the state hands out licences, imposes taxes and regulates, and has the power to do them immense harm. Small businesses, Sakeliga, and the National Employers Association of South Africa, have shown a lot more spine than big business in taking on the government.

Bosses at Pick n Pay, Investec, and Standard Bank Corporate and Investment Bank are part of a growing chorus saying it is becoming increasingly difficult to do business in the country because of the red tape, deteriorating infrastructure, power cuts, and bad attitude of the government. A number of banks have joined the clamour for structural reforms to boost growth in recent weeks, but last week marked the loudest call for change so far.

Some of the points raised by the bosses are taken up in the discussion document released by the ANC ahead of its policy conference next month. President Cyril Ramaphosa writes that the ANC has to revitalise and “adopt new policy frameworks”. Mentioned are the need for new policies for state-owned enterprises and “social compacts” between government, business, and labour. Much of the frustration of business is that they have heard it all before and nothing much happens. Besides, the commitment to reform does not go far enough.

The criticism last week from big business should be a wakeup call to the government, but it is unlikely to be. Government has shown itself to be pretty deaf for years, and there is no reason why this should suddenly change.

It was Gareth Ackerman, the chair of Pick n Pay who delivered the most damning indictment of the government last week. In his address at the presentation of Pick n Pay results, he said his company cannot obtain insurance cover for its outlets in certain areas, and potholes are damaging its trucks.

“We as a business community cannot be in a position where the insurance industry has lost its appetite for South Africa through crime, civil unrest and through a lack of service delivery. The government’s Extended Public Works Programme needs to work on getting rid of the rubbish in townships, he suggested.

The deterioration in infrastructure and power cuts “have a terrible impact on our economy and the environment, which also reduces job creation”, Ackerman said. Government, he added, is “squandering” chances to produce renewable power.

“The amount of red tape, policy obstacles and legal hoops standing in the way of alternative power generation needs to end.”

Last week, Investec said it was worried about the lack of structural reform to ensure growth. Its CEO, Fani Titi, and Richard Wainwright, who heads the local banking division, told Business Day that if there are no structural reforms, the economy will not enjoy adequate growth. The reforms high on the Investec list are cutting the over-regulation of business and dealing with the power cuts and Transnet’s failing rail infrastructure.

“The amount of regulation that our entrepreneurs have to comply with is just strangling everybody,” Wainwright told Business Day.

He also wants to see the cap of 100 MW on power production by independents to be lifted to 500 MW to address the energy crisis. “We launched an emergency power programme two years ago… not a single project has even started in terms of emergency power,” Wainwright said.

Also last week, Ken Fihla, the CEO of Standard Bank Corporate and Investment Banking, said the government needs a mindset change on infrastructure, while pointing to some of the same problems as the other bosses.

As if on cue, to prove the point of those businesses that have spoken out, last week Minister of Minerals and Energy, Gwede Mantashe, threatened to withdraw the mining rights from Sibanye-Stillwater. The threat came from Mantashe after Sibanye-Stillwater failed to settle a 10-week strike on its gold mines. One reason given by unions for the strike is that if the company can give the boss, Neal Froneman, a R300m award, it can afford to give miners a raise. Froneman’s award is mostly in the form of shares, rather than cash, for his performance. Without Froneman, it is doubtful that the company would have turned around mines that many thought should be abandoned, and in the process created many jobs.

And as for indications of a new framework for state-owned enterprises, Pravin Gordhan, the minister with that portfolio, has said that bankrupt Denel would never be sold off. The reason Gordhan gave is that it is a strategic asset and there are security implications. In many countries, including the US and UK, the big defence companies are in private hands.

It is highly unlikely that this week of criticism is a concerted campaign by big business, but rather that some corporates are becoming so gatvol and scared about the deterioration in the country. Some clearly remain worried about speaking out.

Where was Discovery last week?

The government’s National Health Insurance scheme, the NHI, envisages no private health insurance being available in the country. In the face of much of its business being outlawed, Discovery says it wants to help with the implementation of the NHI.

Coming up with a big business programme of action would put the government on the line. The worry from the more cautious in business might be that this would be seen as a demand from business, and the government could hit back. Pretending that all this can be resolved through a watered down ‘social compact’ at the National Economic Development and Labour Council, NEDLAC, is delusional.

Those businesses that want deep reform should sign up to a public programme of action. When they speak of excessive red tape, do they include black economic empowerment requirements among these? Do they favour a change in minimum wage legislation to allow more to be employed? Are they calling for privatisations of the state-owned enterprises?

At least business laying down what it wants in the way of reform and what it is prepared to bring to the table could also inject some reality into the South African economic policy discussion, so the government can be challenged by its commitment to ideology and control.