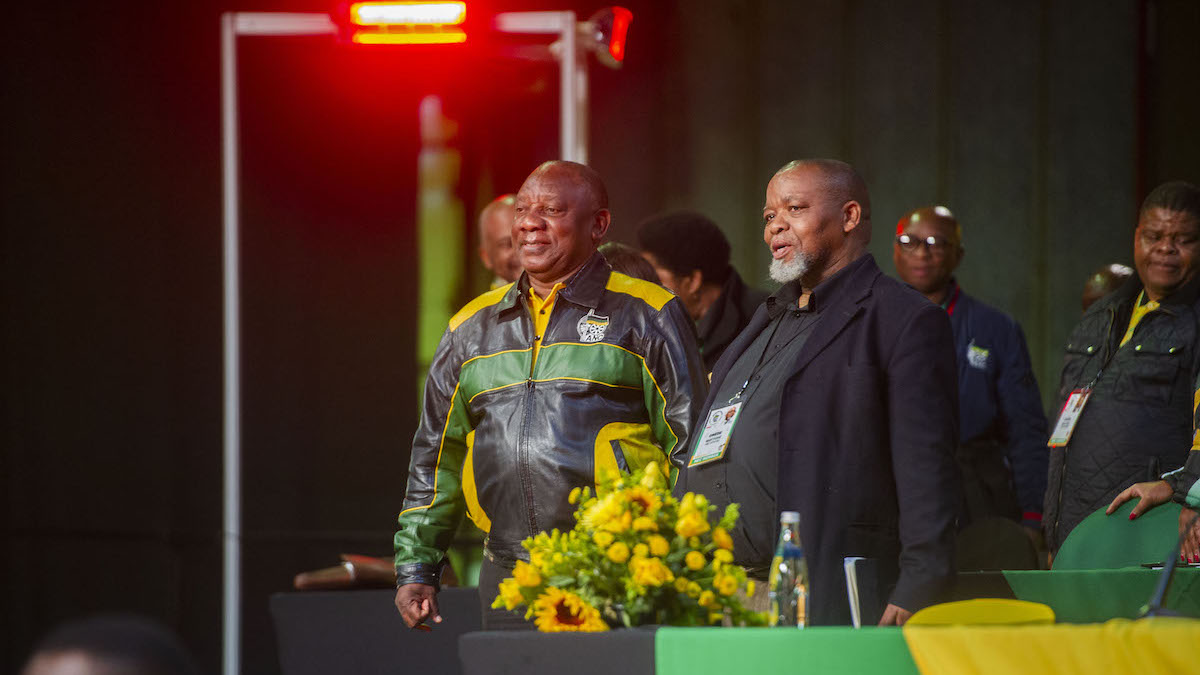 What a pleasure to read something so hilarious and yet so apt. In the article below, Andrew Donaldson examines former president Mbeki’s claim that an Arab Spring is looming in South Africa; looks at the present ANC, which has become “a squabble of warring factions, gangs and collectives united only by a wardrobe of silly regalia” – and referring to Minister Lindiwe Sisulu’s statement that she had transported the formula for “nuclear medicine” for cancer from Russia in her mind to save her ailing friend Jessie Duarte, questions whether the minister’s “mind is a suitable facility for the transport of such medicines?” It’s always wonderful to laugh out loud at clever satire; sadly, the farcical situations he describes are also grounded in fact. This article is republished courtesy of Politicsweb. – Sandra Laurence

The ANC is vrot, but when will it vrek?

THE Times, tried and trusted newspaper of the crusty British establishment, is not usually in the habit of bothering its readership with wild conjecture and flagrantly opinionated journalism like other fish-wraps. Yet, at the weekend, it published an alarming report warning that, one day, South Africa is “going to explode”.

Wherever, you may ask, do they get these ideas?

Well, Thabo Mbeki, for one. The former president reportedly told mourners at a memorial service for Jessie Duarte that record unemployment, poverty and growing unrest have put the country on course for its own version of the Arab Spring upheavals. The ANC government, which Mbeki described as “corrupt”, had no “national plan” to tackle the deepening crisis in the country. Cyril Ramaphosa, he added, was directly to blame for this.

“When he delivered his state of the nation address in February, he said in 100 days there must be a comprehensive social compact to to address these matters,” Mbeki was quoted as saying. “Nothing has happened. Nothing.”

Such comments are somewhat hypocritical. Pot, kettle, black, etc. The cancer of state capture, after all, metastasised during the Mbeki era. The rotten arms deal was signed off on his watch. Ditto the 2004 decision not to charge then deputy-president Jacob Zuma with corruption alongside Schabir Shaik.

Eskom began its collapse into obsolescence at much the same time. The Mbeki administration belatedly announced, in 2007, a R200-billion plan to build two new coal-fired plants, Medupi and Kusile, but the awarding of tenders to design and build the plants was fundamentally flawed, with Chancellor House, the ruling party’s “investment” company, emerging as a shareholder in one the project’s principal contractors.

The Virodene affair was another scandal, given Mbeki and then-health minister Nkosazana Dlamini-Zuma’s enthusiastic promotion of this quack HIV/Aids drug which had as its chief active ingredient the industrial solvent, dimethylformamide.

All this is perhaps effluent under the bridge. Chief concern now is this chatter of an “Arab Spring”. Judging from events surrounding the ANC’s KwaZulu-Natal provincial conference, it would appear such a revolt is now underway.

On Sunday, the Observer led its world news section with a lengthy report on Squirrel’s present leadership challenges. The paper’s African correspondent, Jason Burke, presented his readers with a thorough unpacking of the Farmgate affair, which he described as a saga “embroiling the president in a plot that might be lifted directly from one of the gripping and gritty TV crime series popular in the country”.

That may be, but I think most viewers would be dismissive of a storyline involving a billionaire cow baron inexplicably stuffing millions of dollars into sofas. More intriguing, though, was this from Burke:

“Many analysts predict the [ruling] party will lose its majority at the coming general election or by 2029, whether or not Ramaphosa succeeds in pushing through reforms that might boost economic growth or simply restore reliable power supplies. This would open a new era of coalition politics, with a radical and populist leftwing party the most obvious partner for the ANC.”

I’m not sure who Burke has in mind here as a coalition partner. Surely not the Economic Freedom Fighters? Julius Malema himself has on several occasions flatly ruled out such a partnership. Then again, who can believe anything the tub-thumper says?

Which leaves the only option of the ANC going into coalition … with itself.

This is not as bizarre as it may seem. Consider: the chief take-out from the KZN provincial conference is that the party is finished, vrek, kaput. It is over. In its place is a squabble of warring factions, gangs and collectives united only by a wardrobe of silly regalia.

As is the custom with such events, the start of the conference was delayed for hours as delegates from the eThekwini region dithered over which mob to support — the pro-Zuma “Taliban” faction or their opponents, premier Sihle Zikalala’s “Ankole” bunch, so named as a reference to Squirrel’s prized cattle.

The former, led by former ANC Youth League provincial president Siboniso Duma, emerged as victors and now control the province. Not good news, then, for Squirrel and his clunky, stop-start-sputter-and-stop-altogether “renewal” agenda.

The “Taliban” supporters at the conference signalled their allegiance to Accused Number One by sporting keffiyeh, or Arabian head scarves. According to their leader, Nkosazana Dlamini-Zuma local municipality councillor Vusi Mthemba, the gang settled on the name because the Taliban were tough and fought “until the end”, whatever that meant.

Was this then the “Arab Spring” that Mbeki was on about?

The Taliban are, of course, Afghan and not Arabic. But that’s how it is with the great Blesser’s people: geography’s not a strong point and anything vaguely thereabouts will do.

Lindiwe Sisulu, the wiggy tourism minister, has addressed concerns about the cancer drugs she claims to have secured in Russia for the late Jessie Duarte, struggle gorgon. The SA Health Products Regulatory Authority, for example, warns that the import and export of such treatments is strictly regulated; to do so without permission is a violation of the Medicines Act.

Not to worry: Sisulu didn’t bring the muti back from Moscow in her luggage, but in her head. This according to an interview she gave to the Weekend Argus:

“I had cancer, my brother had cancer, my husband passed away from cancer, so I wanted to go and learn and I found a new treatment. I did not put it in my pocket, it’s in my head. I brought in my mind a new medicine that we could try on Jessie. I didn’t put it in my bag as it is administered by doctors, I’m not a doctor. I was trying to look at the efficacy of their [cancer] medication as they have an excellent facility there, all based on nuclear. I’m not a cancer specialist myself so I needed verification of the effects and side-effects of the medication to see if it works.

Sisulu claims, not unusually, to have been misunderstood. She’d been approached by a reporter while “in grief” as high-ranking ANC members gathered outside Duarte’s home following her death. “I was speaking my mind,” Sisulu said. “So anyone who is misinterpreting it is doing it deliberately and I will not entertain it, they can go to hell, they can go to the courts if they want to, I don’t care.”

Far from “clearing the air”, as one report put it, Sisulu’s comments unfortunately only raise further questions. What exactly is this “new medicine”, and what does she mean that it’s “all based on nuclear”? Furthermore, is the minister’s mind a suitable facility for the transport of such medicines? Supposing the drugs survive the impact in transit of all those colliding half-formed ideas, how are they then transferred from that bedlam to the patient? Is Sisulu some form of human 3D printer?

More generally, the ANC leadership’s stubborn conviction that the Russians are world beaters in cancer treatment is one that continues to perplex. The top five countries for treatment are Australia, the Netherlands, the USA, Canada and Finland. Where the Russian Federation is placed in such rankings is neither here nor there, but according to a global survey by the American Society of Clinical Oncology, the number of cancer-related deaths in Russia is expected to rise by almost 20 per cent over the next two decades. An ageing population is thought to be the chief reason for this increase, despite a decrease in overall cancer-related mortality rates.

However, according to the latest available data, the most common cancer by incidence in Russia is colorectal cancer, which has increased significantly over the past three decades. This may well explain why ANC leaders favour treatment over there; much of what passes for policy — pun intended — appears to originate from that overworked end of the alimentary canal.

As for Sisulu’s suggestion that we all go to hell?

Maybe, but not just yet, say the regulars at the Slaughtered Lamb (“Finest Ales & Pies”), at least not until Duarte has settled down and become less disagreeable. Word is that, since her arrival, she’s made life unbearable for everyone, what with all the caterwauling and raging tantrums.