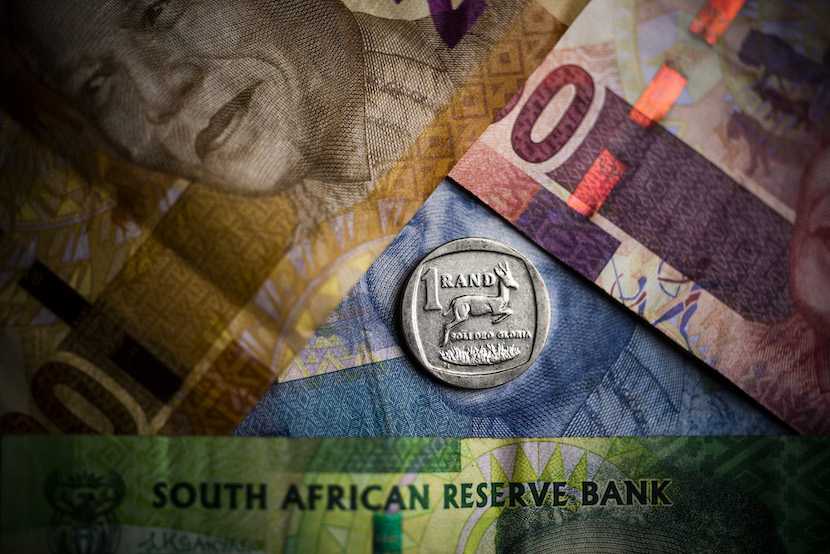 South Africa’s economic road is turning into a swampy cul-de-sac with most of government behaving as if they’re driving a small, nippy hatchback when a powerful 4X4, with winches and wheel-chains is actually what’s needed. This analysis by the Executive Director of the Centre for Development and Enterprise, Ann Bernstein, calmly and rationally lays out the roadside landscape which, when I’d fully viewed it, was the emotional equivalent of reading a Stephen King novel. She doesn’t mean to frighten us; she’s just providing hard, cold facts. Try this on for size; if everything goes to plan on the current route, government and major state-owned companies will be borrowing R1bn a day, every day for seven years (2016-2022). That’s excluding the latest Eskom bailout of R60bn. With debt service costs overtaking every other item on the national budget, state capture, corruption, poor governance and paralysed leadership means the borrowed money is not having the intended effect – in other words; driving growth. Witness the treacle-slow Medupi and Kusile power station build-and-repair debacle, Prasa’s billions spent on modernisation while commuter trains carry 40% fewer passengers. We’re talking explosive debt. Spiralling in on itself and acting as a brake on the growth it’s meant to create. – Chris Bateman

This year’s budget estimated that in the financial years running from 2015/16 to 2021/22, government and major state-owned companies (SOCs) would borrow almost R2.2trn. This implies that if everything went to plan government would borrow R1bn a day, every day for seven years. But even before the ink was dry, that number became an underestimate when the latest bailout of Eskom added nearly R60bn to it.

The effect on government spending of all this is dramatic: debt service costs are the fastest growing item on the national budget, and now consume almost as much as the budget for health, and twice the budget of the police. 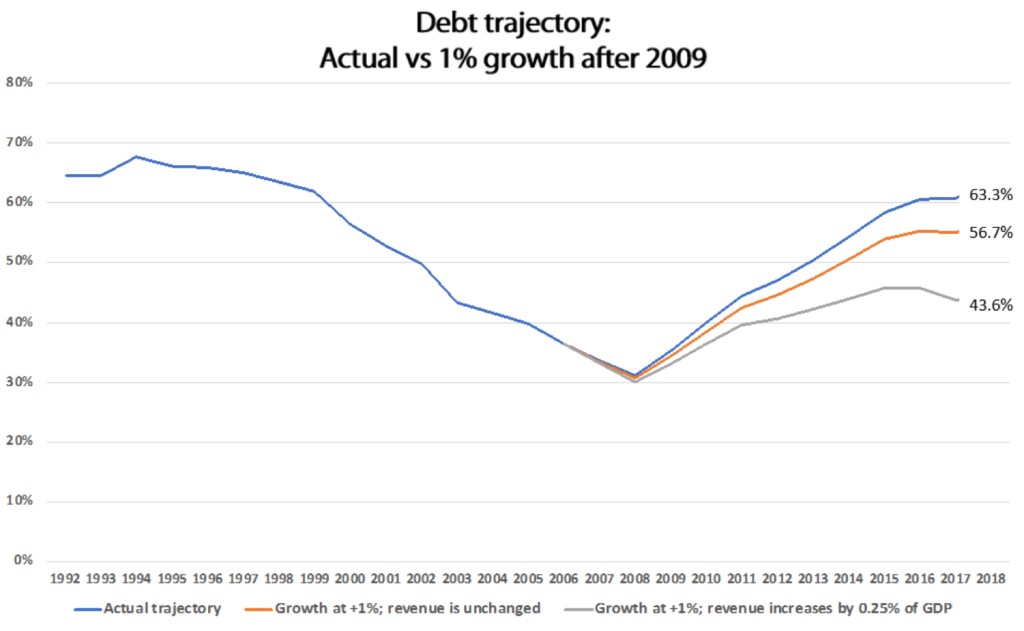 Simply put, the reason the public sector has been borrowing so much is that ever since the 2009 recession government spending has far exceeded its income. State spending plans have been premised on assumptions about economic growth and tax collection that have proved to be consistently over-optimistic with government slow to adjust expenditure in the face of declining growth. The result is large, persistent deficits, leading to vast borrowings.

Borrowing money – even enormous amounts of money – is not a problem if borrowed money is used to create assets that drive growth and increase the economy’s capacity to repay the debts incurred. This, however, is not the South African experience: state capture, widespread corruption, poor governance, incapable leadership, and procurement policies ill-designed to maximise efficiency have all meant that much, even most, of the borrowed money has been wasted.

We have spent hundreds of millions of rands on power stations that do not produce power and scores of billions on trains that never arrive: despite the billions allocated to Prasa’s modernisation, declining service means that commuter trains carry 40% fewer passengers today than they did a decade ago. 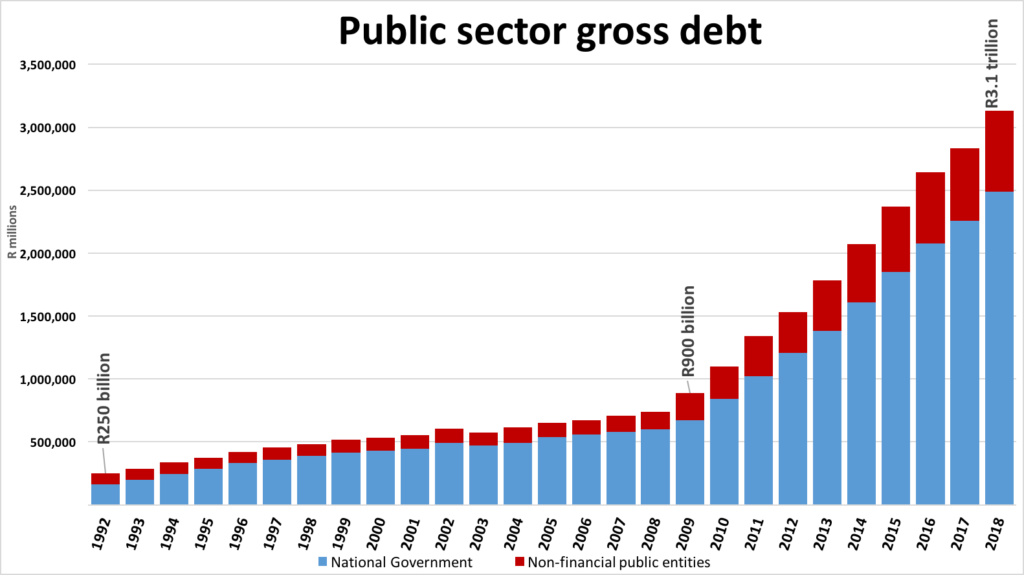 In response to the large, persistent gap between revenues and spending, Treasury has sought to cap expenditure growth over the past five or six years (though not to cut it) and to raise taxes. These limited actions have failed to arrest SA’s explosive debt path.

Though our debt crisis is mostly the consequence of slow growth rather than its cause, increasingly, debt is now acting as a brake on growth. Mounting debts have become an increasing burden on the economy, and are now themselves slowing growth. 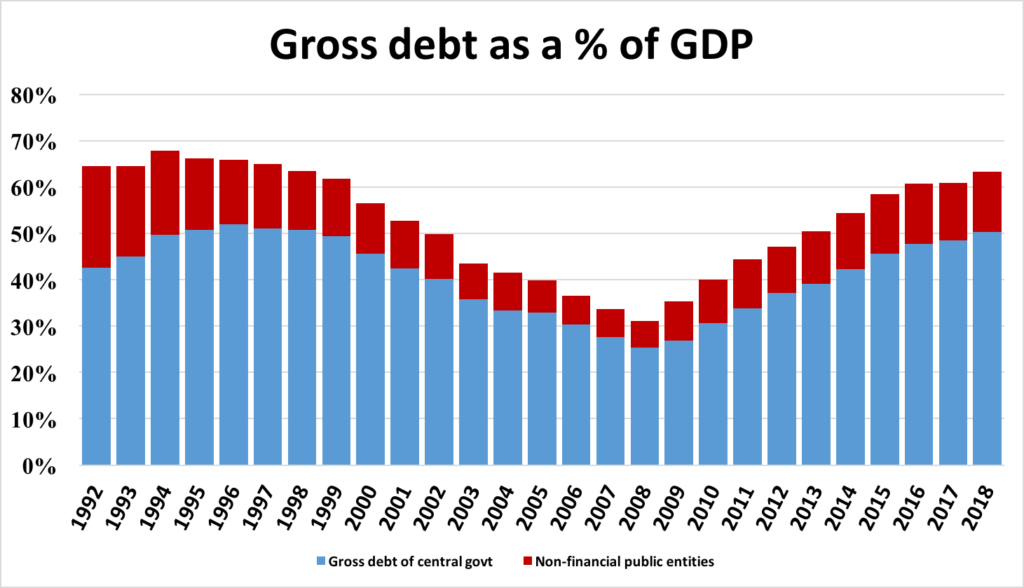 The main mechanism through which high debt levels slow growth is through increased risk – not so much of default as of higher taxes and higher inflation. As these risks rise, so does the cost of capital. And as the cost of capital rises, investment falls.

In this way SA’s past bad decisions devour our future: our ever expanding debt repayment costs take up an ever rising share of national income, leaving less and less money to spend on our many national challenges. Debt service charges are now the single largest item on SA’s budget and growing.

The most likely scenario on present trends is not a fiscal cliff but descent into a swamp: a slow growing reduction in standards of living, economic growth less than population growth, fewer jobs, less money to maintain infrastructure, less dynamism and change in our society. Life gets progressively harder as we get poorer and poorer. In a country with toxic politics this is a recipe for ongoing crisis. 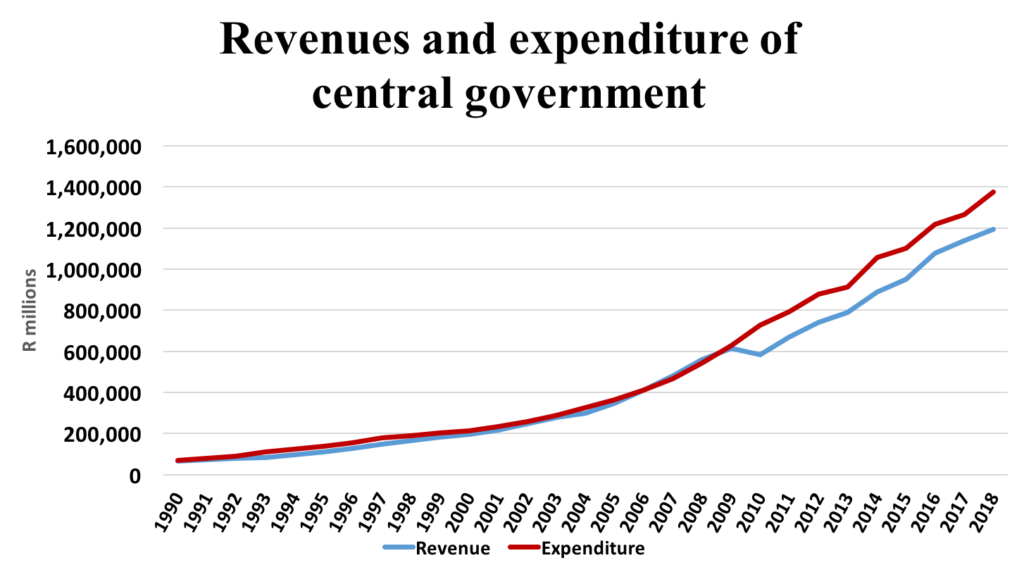 South Africa must change the path we are on.

The critical first step is for government to recognise the scale and depth of the fiscal problem. To some extent, this has happened, and Treasury and the President clearly know that we are in trouble. Whether and to what extent this is true of all cabinet ministers, party officials and senior public servants is more debatable.

Having acknowledged the crisis, which should be communicated widely to all South Africans indicating the need for tough choices to get things under control, the next critical step is to act. And, here, the goal has to be significant fiscal consolidation.

Government has sought some consolidation in the last few years, principally through higher taxes. This has not worked. Nor is it likely to: the economy is too weak to raise taxes, SARS needs rebuilding and tax compliance is down even as corruption is up.

Government has to tackle spending much more vigorously. In an ideal world, waste and corruption would be excised and cuts would hurt no-one but those who benefit unjustly from that spending. This is easier said than done, so a government that is serious about dealing with the crisis, has to focus on big-ticket items, especially public service compensation, the growth of which has been unsustainable for at least a decade. Treasury data show that average wages in government have risen by nearly 11% a year between 2006 and 2016.

Government must maximise the savings it can obtain by squeezing waste and corruption out of the system: the more it achieves here, the less of a burden that public servants will have to bear. But the country cannot afford what we already do. There is no room to increase the list.

Our situation requires a tough choice of priorities for expenditure – less on SAA, more on the NPA – and ferocious determination to stick to these.

Achieving fiscal sustainability through cuts and taxes alone is probably not possible and would be exceptionally painful and disruptive. Far, far easier would be to get growth going again: by our calculation, if the economy had grown just one percentage point a year faster each year over the last decade, public sector debt could have been as low as 44% of GDP and falling rather than 63% and rising. 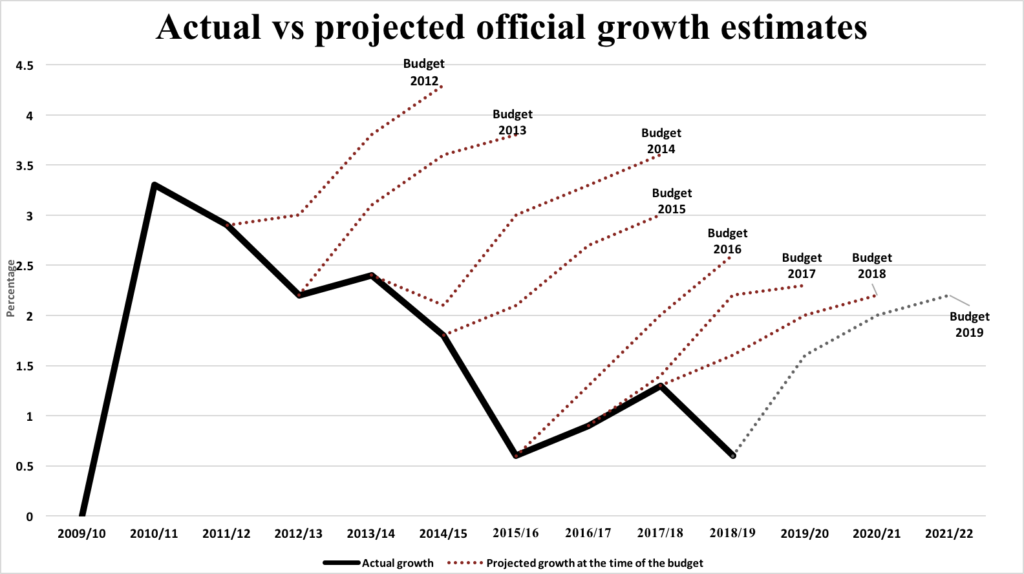 The fact is SA cannot solve its fiscal crisis without prioritising growth.

Addressing the crisis in our public finances with determination will send a powerful signal about government’ seriousness. Simultaneously, government must put Eskom and other SOCs on a new path: some must be sold, some must be restructured, many need new leadership who have institutional and political independence needed to make the tough choices required.

Thirdly, government – which has long talked about its desire for growth – needs to actually walk the hard yards and deliver growth-friendly reforms that everyone knows we need: open the country to skilled immigration, reform labour market rules to encourage a more labour intensive economy, embrace a new attitude to markets and business, address the regulatory burden, make it easier to employ young people and start new firms.

Finance minister, Tito Mboweni has said  “we really cannot go on like this.” And as economists like to say: things that can’t go on forever, don’t.

How South Africa’s unsustainable trajectory ends is uncertain. What is certain is that as we drift deeper into the swamp, we are all paying the costs and the poor most of all. Time is running out. Courageous leadership is essential if we are to make the decisions the country desperately needs.