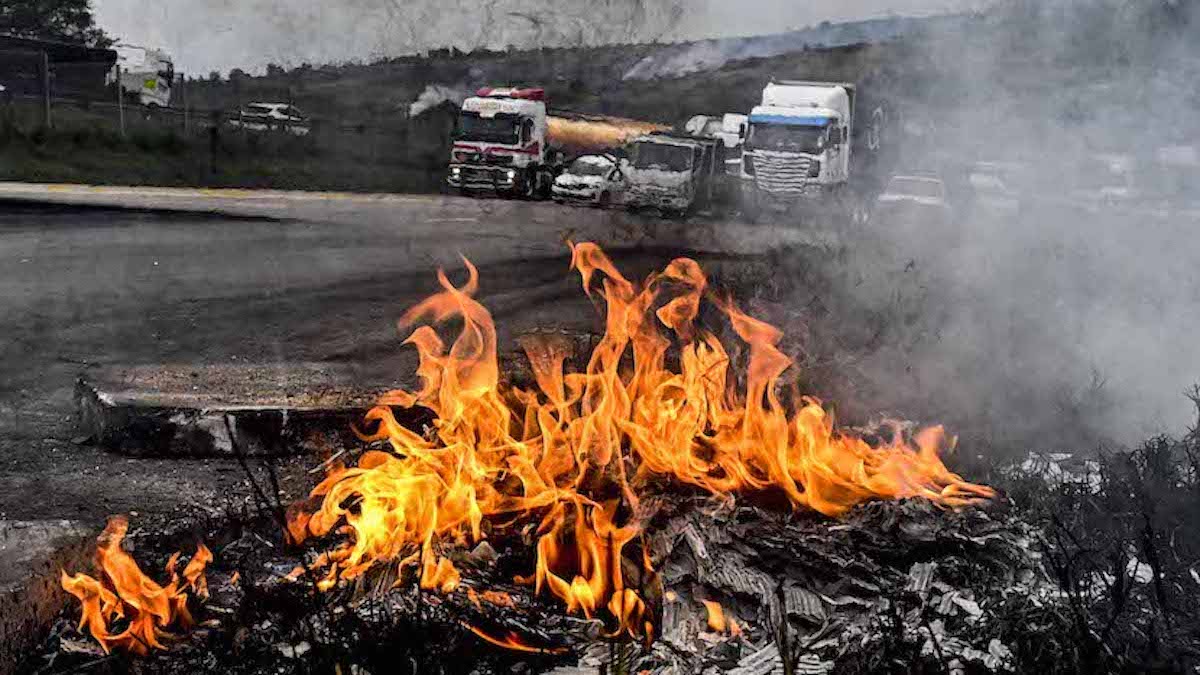 While most of us, naively perhaps, pray for the imploding of the ANC at the 2024 polls, the reality is the Leninist vultures are waiting in the wings to take advantage of any hiatus or directionless coalition. That’s the warning in this sweeping historical/political analysis, sketching similarities between Zuma’s coterie of instantly rich politicians and business cronies and Russia’s oligarch-ruled society. Even with Zuma gone and prosecutions slowly ramping up, the rot remains. Too many still benefit from embedded systems that Zuma and his cronies put in place. Chuck Stephens, executive director of the Desmond Tutu Centre for Leadership, likens Lenin’s historical overthrow of the czars to the KwaZulu-Natal anarchy and violence; the tactics are classically similar. With many Leninists still on the loose in SA, Stephens is reluctant to apply the word ‘former’ to state capture. One only has to look among the ANC leadership and cabinet to realise the game is far from over. – Chris Bateman

Karl Marx was a German philosopher. But he wrote his seminal work Das Kapital sitting in the quiet library of the British Museum in London. Far from the madding crowds.

Lenin was Russian and lived in bitter exile during World War I. When the opportune moment came for revolution in Moscow, he received diplomatic assistance (from Russia’s enemies, needless to say) to cross Germany undetected in a closed train. So, he basically slipped back into Russia to work the crowds. By igniting a domestic front in the midst of a war that was already weighing heavily on the czar, he managed to pull it off. This was not pure Marxism, it was Marxist-Leninism. The Bolsheviks upended the monarchy with clever and cynical tactics during a time of regime-threatening war. This was cold, calculated insurrection.

Leninism unleashed itself on many other countries after that. It was totally undemocratic and opportunistic. A small cabal of well-trained ‘revolutionaries’ could work the crowds by rhetoric, populism and because the working class outnumbers the ranks of law enforcement. They would seize strategic ministries and sequester the legal leaders. The Russians still call it a putch. It is a kind of coup that is more populist than military, by outward appearances. But make no mistake, it is premeditated and carefully planned.

Without Lenin and his tactical genius, the grand strategy of Karl Marx may never have been tested on such a large scale. Have we learnt from this? Or does history repeat itself?

What was behind the unrest of July 2021 in South Africa? In the midst of a Covid-19 pandemic at Alert Level 4, political leaders were distracted just like the czar was in 1917, fighting World War I. It was not a case of an organised rebellion or coup, it was classical Leninist strategy. Work the mobs! Unleash fear and hatred on a grand scale. Plan just how and where to attack the weak underbelly of the ruling regime. Then loot and burn!

Cabals also became very important to state capture. We all know of the centre ring that met at a shebeen in Saxonwold. The infamous Gupta brothers were not elected political leaders but they could make or break key government appointments; even the Ministry of Finance! They ran into self-exile when the temperature of risk got too hot. Even as they are being hunted – whether in Dubai or by the State Capture Commission – these cabal members are looking for a ‘Bolshevik moment’ to strike back.

Classical Leninism does not care if you are elected or not. Admittedly, there is such a thing, somewhere, as ‘democratic socialism’. But it is not Leninism. Lenin’s legacy is to go after the power by deploying a relatively small cabal of trained experts, who know how to work the crowds. Call them revolutionaries or insurrectionists, I don’t care. It’s semantics.

Turning to Russia in the here and now, it is neither a monarchy hosted by a czar, or a people’s republic. At this stage, it is an oligarchy. This is a kind of formalised cabal. The state has already been captured without any Zondo Commission to trip it up.

The Russian oligarchs are very wealthy people who have enriched themselves through state contracts and economic benefits. They run key industries and sectors, and they pay more than tax. They render unto Caesar what belongs to Caesar. So, when he decides to go to war, they must be there for him. That is why countries opposing Russia’s invasion of Ukraine have slapped sanctions on some of them. Their yachts are being seized; even a British football club had to change ownership. Through international banking systems, their wealth is being tracked down, located and frozen. That is how to weaken a cabal.

I am not going to spare any variant of comment. What is commonly called the Deep State in America is also a kind of cabal. Except that it has grown to an enormous size and is relatively faceless. But its existence is obvious. You may not know all their names or nicknames, just like sitting in Plato’s cave. In the Greek philosopher’s metaphor, we can see only the shadows moving on the wall. The real Deep State is outside the cave, and we know about it only by the shadows the fire casts on the wall of the cave.

South Africa’s problem is state capture. I would like to say ‘was’ but knowing there are Leninists on the loose, I will leave it in the present tense.

Russia’s problem is similar: vastly wealthy oligarchs who help the president to make a farce of democracy.

I see the Deep State in the USA along the same lines. It knows very well how to work the crowds. Look at BLM protests during the critical year of the Covid-19 pandemic. Look at the leak of a draft SCOTUS decision on Roe versus Wade; and the commotion that it generated, threatening judges and burning churches. Look at the way the media can submerge some news stories while it wildly exaggerates others. The new ‘tech barons’ are part of the Deep State cabal in the USA. You do not need to be a political leader to join a cabal. Just ask the Gupta brothers and George Soros.

Is this happening at an international level? Has the WEF adopted Leninesque tendencies? Certainly, there is an intelligencia that wants to shepherd the global flock in a certain direction. All the while, they are fleecing the sheep.

Working the crowds gets very close to manipulating the outcome of elections. Russia has bent and folded its democracy quite shamelessly. That is when you really need to worry; when public funds pay for upgrades of the ruler’s own residence. When landing permits are granted to fly in wedding guests to a military base without due security clearances. Or when kickbacks are so common that people on the street call their premier ‘Mr Twenty Percent’.

We do not want to see another czar fall. Especially one who has been elected democratically. But when voter confidence falls to less than 50 percent for any one party, watch out for the Leninist vultures. They are waiting for the lions and hyenas to eat their fill. Then it will be their turn. This is a near and present danger.