GENEVA, Sept 17 (Reuters) – The billionaire founder of the luxury goods firm that owns Cartier and Montblanc returned on Wednesday as chairman after a year’s sabbatical, at a time when the company’s sales are slowing in its key Asian market. 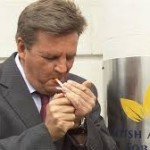 South Africa’s richest man Johann Rupert has a track record of leading Swiss-basedRichemont through difficult times and his comeback at the company’s annual general meeting in Geneva provided some comfort for investors.

Highlighting the task ahead, figures released before the meeting showed sales rose less than expected in the five months to the end of August, helping to knock 3.7 percent off the share price, which would be the biggest daily drop since June 2013.

Luxury watch makers are grappling with political instability in Hong Kong, the leading market for Swiss watches, and weak demand in China, where the government’s crackdown on corrupt gift giving has hurt sales of expensive timepieces.

“Johann Rupert is highly reputed and he has in the past showed great views on the market,” said J.Safra Sarasin analyst Michael Romer. “That’s definitely needed now to overcome this challenging business environment.”

Rupert did not speak publicly at the shareholder meeting and declined to comment on the sales figures, which showed an overall rise of 4 percent on a constant currency basis, down from 9 percent in the same five-month period a year earlier.

Talking on the sidelines of the meeting, Co-Chief Executive Bernard Fornas was upbeat when asked about the company’s prospects in China, despite the fight against corruption.

“There are so many rich people in China and there is an emerging middle class,” Fornas told reporters in Geneva. “It’s not because you have a lot of money that you are corrupted.”

Richemont, which owns brands such as Piaget and Van Cleef & Arpels, generated 48 percent of sales in Asia, 37 percent in Europe and 15 percent in the Americas in the year to March.

Fornas said shareholders should take a long-term view and trust in the “phenomenal creativity” of the company’s pipeline of future products.

When asked about the launch of the Apple Watch earlier this month, Fornas said Richemontwas looking at the burgeoning smart watch industry, while refusing to be drawn on future plans.

In focus next for investors is the release of Swiss export figures for August on Thursday, which will include closely watched figures for watches.

Going forward, the company will hope Rupert, its controlling shareholder, can use his experience as executive chairman from 2002 to September 2013 to help arrest the slump in sales growth.

In that role, he became involved in day-to-day business decisions whenever he deemed it necessary. In difficult times, he even took on the combined role of chairman and chief executive, once from 2003 to 2004 and then from 2010 to 2013.

“In the Asia-Pacific region, sales were lower in Hong Kong, Macau and mainland China, offsetting positive developments in other markets,” Richemont said in a statement.

Analysts in a Reuters poll had expected sales to grow 6 percent on a constant currencies basis and 3.2 percent at actual exchange rates.

“This should put pressure on Richemont shares … and on the sector as a whole as Richemontis the first company to report all the way to August,” an analyst at JP Morgan, which has a ‘neutral’ rating on Richemont, wrote in a note.

Sales in Asia-Pacific were flat at constant currencies. In Europe and the Middle East they rose 6 percent. The fastest-growing region was the Americas, where sales rose 12 percent.

Growth at Richemont’s jewellery houses Cartier and Van Cleef & Arpels, which include Cartier watches, rose 2 percent, while specialist watch makers including brands such as IWC and Jaeger-LeCoultre recorded a 4 percent sales increase.

U.S. jeweller Tiffany raised its full-year profit forecast last month after strong sales and higher prices for its high-end jewellery in the Americas boosted profits, but Richemont is more exposed to Europe and Asia. (Additional reporting by Silke Koltrowitz and Joshua Franklin in Zurich; writing by Joshua Franklin; editing by David Clarke)