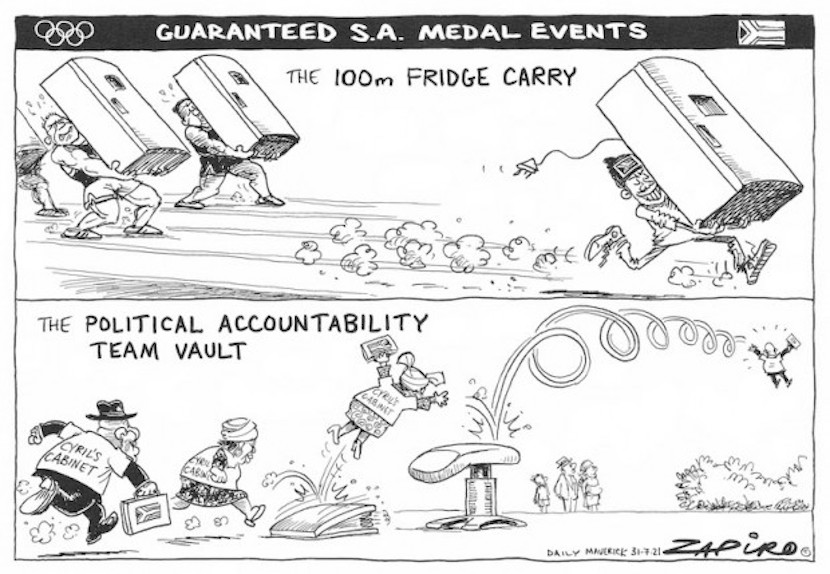 Not the midnight shuffle of the Zuma era; President Cyril Ramaphosa did keep South Africa waiting for half an hour. All the appointments and reappointments are laid below and there were a few important moves to highlight. Prior to the announcement, Health Minister Zweli Mkhize handed in his resignation to deal with the Digital Vibes scandal. Another, which might not shock those close to politics, saw Finance Minister Tito Mboweni step aside. Enoch Godongwana will fill Mboweni’s shoes. The State Security cluster was also disbanded and will now fall under the Presidency. And those in the communications and digital fields may be breathing a sigh of relief as both the minister and deputy minister were replaced, but with no resolution to a 10-year spectrum fight, citizens are still the big losers. The Rand initially lost 15c against the dollar on the announcement. – Stuart Lowman

By S’thembile Cele and Amogelang Mbatha

Mboweni’s replacement was among several changes to the cabinet announced by Ramaphosa on Thursday. The appointment of Godongwana, 64, follows months of speculation about Mboweni’s position in the government after he said he would favour a return to the private sector.

The rand fell as much as 2.5%, the most on an intraday basis since February, before paring the decline to trade to trade 0.6% weaker at 14.4641 per dollar by 9:35pm In Johannesburg. 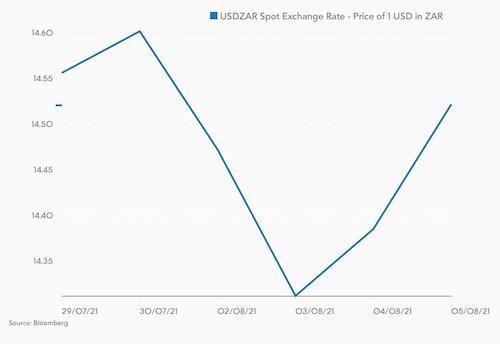 Mboweni “was a pillar of financial stability in the country,” said Brendan McKenna, a currency strategy at Wells Fargo in New York. “Investors felt comfortable he had the ability to get debt under control and place debt on a more sustainable trajectory. Him leaving is a bit of a problem.”

The former central bank governor, whose appointment to the post sparked a financial-market rally is 2018, was popular among investors for his strong stance on reining in government spending, cutting public-sector wages and support for loss-making state-owned companies, and selling some state assets.

Godongwana is a former deputy minister of public enterprises and of economic development. He holds a master’s degree in financial economics from the University of London.

Ramaphosa also announced that the state security agency would be brought under the control of the presidency and fired his defense minister in the wake of some of the worst unrest the country has ever seen. He also replaced his heath minister who quit earlier Thursday after being implicated in a tender scandal.

Ayanda Dlodlo, formerly the intelligence minister, will take over the public service and administration portfolio from Senzo Mchunu, who becomes water and sanitation minister. Defense Minister Nosiviwe Mapisa-Nqakula will be replaced by Thandi Modise, who is currently the speaker of Parliament, while Mkhize will be succeeded by his deputy Joe Phaahla.

The reshuffle is the first since Ramaphosa appointed a new cabinet after 2019 elections. The president has come under pressure to hold members of his executive to account for failing to anticipate and counter a week of riots last month that were triggered by the incarceration of his predecessor Jacob Zuma and claimed more than 350 lives.

“While calm has restored to the affected areas and our law-enforcement agencies are working hard to bring those responsible to justice, we have acknowledged that our security forces were found wanting in several respects,” Ramaphosa said. “As part of the critical measures we are undertaking to strengthen our security services and to prevent a recurrence of these events, I am appointing an expert panel to leave a thorough and critical review of our preparedness and the short-comings in our response.”

Other new appointments include Mondli Gungubele as a minister in the presidency, a post that’s been temporarily filled since Jackson Mthembu died of a coronavirus-related illness in January, and Khumbudzo Ntshavheni as communications minister and Mmamoloko Kubayi as human settlements minister. Lindiwe Sisulu, who previously oversaw the housing, water and sanitation portfolio, becomes tourism minister.

The cabinet shakeup comes just over a year before the ruling African National Congress holds an elective conference. Ramaphosa is widely expected to seek a second term as party leader and his decisive action should help affirms his political authority.

Ramaphosa, 68, initially won control of the ANC by a razor-thin margin in 2017, but was repeatedly undermined by a party faction loosely aligned to Zuma and Secretary-General Ace Magashule. They’ve been sidelined in recent months, with Zuma serving a 15-month sentence for defying a court order to testify before a graft inquiry and Magashule suspended from his post while he faces trial on graft charges.

This evening, I am announcing certain changes to the National Executive.

This comes at a time when the country is facing several challenges and we are called upon to undertake several tasks at once.

Firstly, we are working to accelerate our vaccination programme to overcome the COVID-19 pandemic.

Secondly, we are working to ensure peace and stability in the wake of the recent outbreak of violence and destruction in parts of the country.

Thirdly, we are mobilising all available resources and capabilities to rebuild our economy and provide relief to those most vulnerable.

I am therefore making changes to the National Executive to improve the capacity of government to effectively undertake these tasks.

At the same time, there are a number of vacancies that need to be filled.

These include vacancies created by the tragic passing of Minister Jackson Mthembu and Deputy Minister Bavelile Hlongwa, and the appointment of former Deputy Minister Parks Tau as an MEC in Gauteng.

A further vacancy has arisen following the request I have received from Minister Zwelini Mkhize to allow him to step down as the Minister of Health in order to bring certainty and stability to this important portfolio.

I am grateful to Minister Mkhize for his service, and particularly for the outstanding leadership he has provided in the face of the worst pandemic in over a century.

I have also accepted a long-standing request by Minister Tito Mboweni to be excused from his position as Minister of Finance.

Since then, he has effectively and ably steered National Treasury through extremely difficult economic times, providing stability and instilling confidence. I am grateful to Minister Mboweni for responding to the call to serve our nation at its time of need.

We may not always have agreed with him, but @tito_mboweni did a remarkable job with the good of the country always the main consideration. #ThankYouTito (And happy cooking!😉🔥)

We are making certain changes to the configuration of government departments and Ministries. The first of these is to separate the Ministry of Human Settlements from the Ministry of Water and Sanitation.

At the beginning of this administration, we had brought these two portfolios together on the understanding that the provision of water is closely tied to the development of human settlements.

However, the reality is that water is a far broader issue, impacting not only on human settlements, but also on agriculture, industry, mining and environmental management.

Water is our country’s most critical natural resource.

Water security is fundamental to the lives and health of our people, to the stability of our society and to the growth and sustainability of our economy.

We have therefore decided that water and sanitation should be a separate Ministry, which will enable a dedicated focus on ensuring that all South Africans have access to a secure and sustainable supply of this precious resource.

The second change we are making is to do away with the Ministry of State Security and place political responsibility for the State Security Agency in the Presidency.

This is to ensure that the country’s domestic and foreign intelligence services more effectively enable the President to exercise his responsibility to safeguard the security and integrity of the nation.

With respect to Ministers, I am making the following new appointments:

Minister Nosiviwe Mapisa-Nqakula will be deployed to a new position, and we thank her for service to the nation and dedication to her responsibilities. With respect to Deputy Ministers, I am making the following appointments:

Mr Zizi Kodwa is appointed as Deputy Minister in the Presidency responsible for state security.

Three weeks have passed since the country experienced an orchestrated campaign of public violence, destruction and sabotage.

I wish to once again commend the brave actions of our security forces on the ground, who were faced with a difficult situation and exercised commendable restraint to prevent any loss of life or further escalation.

While calm has been restored to the affected areas and our law enforcement agencies are working hard to bring those responsible to justice, we have acknowledged that our security services were found wanting in several respects.

As part of the critical measures we are undertaking to strengthen our security services and to prevent a recurrence of such events, I am appointing an expert panel to lead a thorough and critical review of our preparedness and the shortcomings in our response.

The panel will examine all aspects of our security response and will make recommendations on strengthening our capabilities.

To improve support to the President and the National Security Council in the strategic management of the country’s security, I am appointing Dr Sydney Mufamadi as National Security Adviser. This position has been vacant since Mr Charles Nqakula stepped down earlier this year.

I wish to express my deep appreciation to all outgoing Ministers and Deputy Ministers for their service to government and to the people of South Africa.

The task of rebuilding our economy and our society requires urgency and focus.

It requires cooperation among all sectors of society and the active involvement of all South Africans.

As this administration, as this collective, we are unwavering in our determination to build a capable state, one which is ably led and which effectively serves the needs of the people.