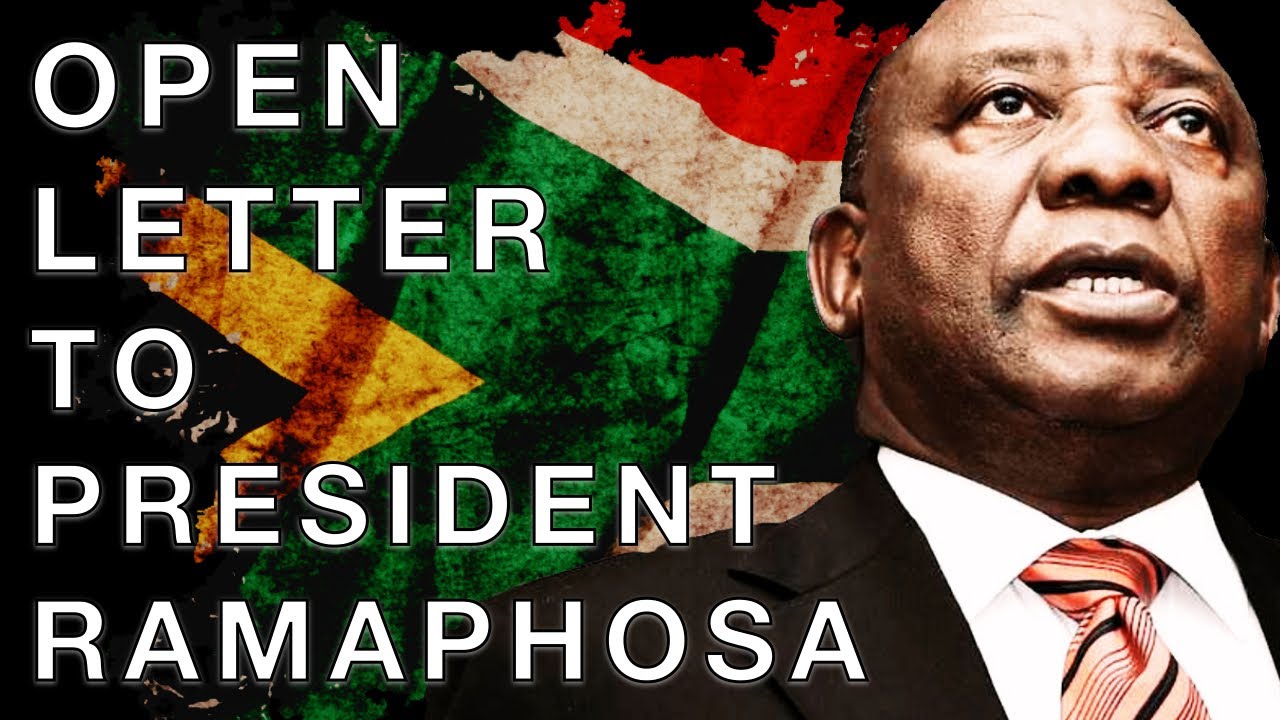 BizNews is celebrating its ninth birthday this Friday and we’re looking back at the nine best-performing articles that appeared on the site. The open letter below captures the mood of the average long-suffering South African who has finally lost patience with the ANC’s record of idiotic economic policies, corruption and misgovernance. During the unrest last year, however, that generosity disappeared and long suppressed anger was uncorked. In their hour of greatest need, communities whose rates and taxes keep the national wheels rolling were left to fend for themselves. Those they paid to protect them simply disappeared or stood idly by watching the methodical, fearless plundering. As a result many in the previously silent and mostly isolated majority have found each other – and their collective voice. This anonymously produced Open Letter to Cyril Ramaphosa circulated on social media to almost universal applause.

You now have the perfect opportunity to do the right thing. Everyone knows this was an attempted coup, and you’ve said as much, just in different words.

It was civil society who came to your rescue. Ordinary people, living ordinary lives, across the income, gender and race divide, showing you that South Africans are one. We stand together when the odds are against us. We stood together to protect life, property, and democracy. And in an important way, we did the job the Army and Police, after years of mismanagement and cadre deployment, could not do. We protected the legitimately elected government. You, in other words.

So here’s some advice you may care to hear about doing the right thing, and showing everyone that you really are grateful that we stood as one to defend democracy, and that you do have respect for us all, no matter who we are. And that you really care about something else other than power, and ANC unity.

Stop treating poor black South Africans like voting fodder. Enough with the failed service delivery. It’s disgusting and unnecessary. Fire people who don’t do their jobs. Make that phone call. Read the goddamn Riot Act. Start delivering services. Show you actually give a damn how people live and whether they can get clean water and drive safely on our roads. So enough with the KFC and t-shirts. It’s revolting.

Stop treating white South Africans like the enemy. Make saying “WMC” or “1652” a hate crime, like the K word. It’s actually every bit as insulting, and it’s flung about carelessly by ideologues who are just plain racist. Enough now. And tell the Human Rights Commission to do its job. They’re supposed to look after all of us. They don’t.

Stop treating coloured and Asian South Africans like second class citizens. They also suffered under apartheid. Stop with the hierarchy of disadvantage rubbish. It’s divisive and revolting. Quotas are a no-no. Dump them. Everywhere. Sport included.

Admit we have a tribal problem. Zulus moved to the ANC when they thought one of their own had a shot at the Presidency after years of the Xhosa Nostra. They were right. He did. And look what he did. The attempted coup was nothing but Zulu insurgency and resentment at having lost power, and the chance to feed at the trough again. Read your history. Just be honest about it, and move on.

Stop with the dual legal system. We are supposed to have just the one. So taxis, thanks for all the help during the riots and looting. Kudos to you. You deserve it and we’ll all be a bit nicer to you now. But tough love is called for here. Like obeying the rules of the road, having licences, and paying tax. Come now. Why must I, or anybody else, if they don’t? There are other examples – many – where there’s one rule for people who vote in a bloc for the ANC, and then we others. Like unions and the damage they cause during strikes but yet are never, ever held accountable. Enough already. People lose the will to obey the law when they see favoured people and groups flouting it without consequence.

Stop calling anti-white, anti-coloured and anti-Asian discrimination “transformation” or “empowerment”. It isn’t. It’s a thoroughly odious policy because it causes division, resentment and hatred, and mass scale emigration of our talent. Just stop it. Rather give proper tax incentives to get the unemployed into jobs, and let people compete equally so we’re not in a perpetual race to the bottom. Black South Africans are more than capable of competing. Stop infantilising them. It isn’t winning any votes, and it causes massive corruption and endless inefficiencies. You have the evidence in front of you. Enough. Just stop.

Stop discriminating against people working abroad (most of whom can’t find jobs here either because of the economy, or affirmative action). The new tax on them, when they aren’t even here and aren’t absorbing services, is noxious. Just stop. And that emigration tax? Enough. Stop. People leaving have already paid tax on that money; they shouldn’t have to pay twice. Just let them go in peace.

The xenophobia disaster needs attention and it starts with you. Violence against foreigners not only finds expression in catastrophic attitudes against Africans, but it also is evident on how you treat skilled foreigners from elsewhere in the world. Why make it so difficult for them to come here and share their skills? We have haemorrhaged skills. We need them. Desperately. Make it happen. It isn’t hard. Tell Home Affairs to start behaving like human beings. And do their jobs quickly. Why does it take six days to get a copy of a birth certificate in most Western countries, and up to six months here? What are they doing? It’s not as if Home Affairs is under-employed.

How could you agree to anything more than a wage freeze for the public sector? It’s bloated, over-employed and frighteningly inefficient. Why should the private sector bear the brunt of it all? We are all suffering, while they continue to earn guaranteed wages. Enough.

Do you now understand the damage that cadre deployment has done? Even though in your evidence at the Zondo Commission, you said it would continue to be ANC policy? I can’t believe you really think that. You must have been playing to the gallery. You nearly had a coup because of it. The SAPS were woefully unprepared and completely unprofessional during these riots. They just stood by and watched people loot. As they do when xenophobia strikes. They just stand there and watch idly. Or when trucks are stopped, stoned and looted. They just stand there. In this attempted coup, the Army was late, the detachment too small, and the heads of both the SANDF and the Police might be political heavyweights, but they are professional lightweights. They are completely out of their depth. If you have to keep them, send them as Deputy Ambassadors to African countries. Then they’ll be safely out of the way and no threat to you. Professionalise both Ministries so we can respect them again.

Shut up with the Comrade this and Comrade that. It’s 1950s Soviet-speak and it’s patently ridiculous.

Tell the ANC Women’s League to stay in its lane. They are appalling. Tell us one thing, just one, that they have done to enable women to grow and succeed in this country. They’re just a political group of women with racist views and ideological confusion. Most women with a brain who I know (and that’s a lot) wouldn’t go near them with a 10-foot bargepole.

Stop treating us like children with alcohol. You’re drinking the Kool Aid of the prohibitionists. Yes, we do have a problem, like any country, and if you read the science and the stats, it isn’t a tenth as bad as you constantly make out, so stop scapegoating it. Deal with it. And that doesn’t mean more legislation, which illegals in any event will ignore. It means enforcement. It means doing your job. And education for those who need it. For the rest, just leave us alone.

Stop with this NHI fantasy nightmare. It’s a disaster waiting to happen. Those of us on medical aid save a fortune for you to spend on those who can’t afford healthcare. So just do your job. Fix the hospitals. Hire more doctors. Treat nurses with respect. Professionalise intern deployment, which is a basket case of inefficiency and dire incompetence. Just do your job for crying out aloud. There’s enough money there, but useless cadres running it. If they can’t do the job, fire them.

Stop whining at private and Model C schools. Again, parents are paying for that which saves you paying for their children at public schools. The colour of the teacher does not matter. Not to us as parents, not to children, not to anyone. Except the ANC. So why don’t you do yourself a favour and learn from the private schools. They use their money wisely. They involve their parents and actually listen to them. And they run the schools professionally. They are accountable. So duplicate that in the public sector. It ain’t that hard. Start with SADTU. I shouldn’t have to tell you this.

Stop with the expropriation rubbish. It’s theft, and you know it is. You only support it because the loony members of your party wanted to take pressure off the ANC from the EFF, and the other ones just wanted a licence to steal. Stop. It’s enough. You have plenty of land owned by the State to redistribute. No one’s stopping you. Just go for it.

Stop with this “business is the enemy” rubbish. You have hashed the vaccine rollout because you wanted to control everything. But your government does nothing efficiently. Your ideological command and control has actually cost lives. You are to blame. What did you say to Jabu Mabuza’s family? Sorry, he could have had the vaccine earlier but ANC policy of control is more important? Come on.

And while we’re about it, tell the Competition Commission that their job is not to get in the way. They should also stay in their lane. They’ve turned the CC into a political tool. And while I’m about it, you can’t have a communist running trade and industry. That’s just plain stupid. Get with the programme.

Why, Mr President, are people flocking in such great numbers to the Western Cape? I won’t answer that because you know. So instead of being obstructive, try work with them. You may want to copy the concept of clean government. We might all not like those in power in the Western Cape, or even vote for them, but they work hard and they don’t steal. Stuff happens. Don’t you just want to die when you see audit reports and the only clean ones are in DA-run municipalities? Don’t you just cringe with embarrassment? You should.

You say you’re non-racial. Good. But in the same breath, you say you like “representivity” (appalling made-up word). Tell us again how many white ministers you have? Oh yes. None. Please don’t play on the non-racial bandwagon. You fell off long ago.

Do you want productivity, Mr President? Do you want economic success? Do you want social cohesion? Don’t you understand that the vast middle want all of these things? Do you want to stay in power? It’s not actually that hard. Treat us all with respect. Equally. As citizens. Who defended you when it really counted. And importantly, in too many cases to mention, the best thing for you to do is just to get out of the way.