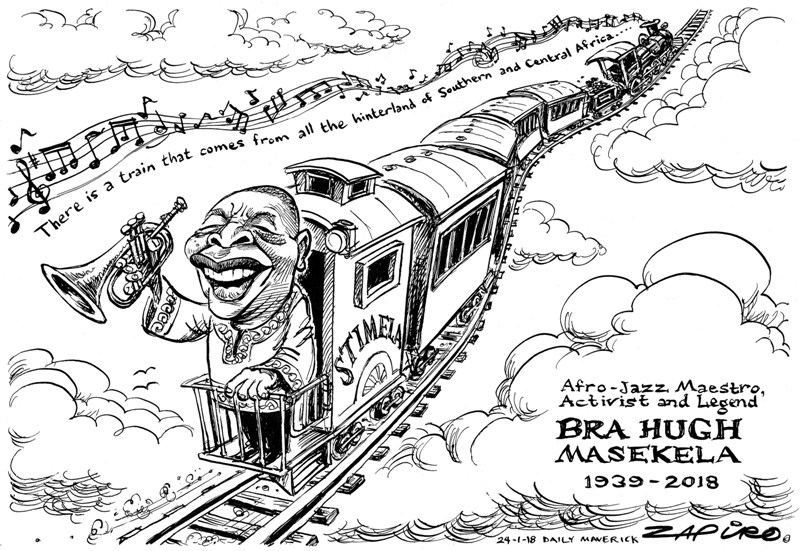 EDINBURGH — South Africans are mourning the loss of jazz legend and anti-apartheid activist Hugh Masekela, who has died after a struggle with prostate cancer at the age of 78. Although the death rate from prostate cancer has decreased, the disease is still one of the biggest cancer killers of men. Hugh Masekela urged other men to get early checks for the disease. He also struggled and overcame addiction, and helped others with their demons, in a life marked by extraordinary success on the world stage. Above all, Hugh Masekela put South African music on the map through his inventive, memorable styles. His unique songs and rhythms captured the sounds of South Africa over decades, from apartheid to democracy. – Jackie Cameron

It is with profound sorrow that the family of Ramapolo Hugh Masekela announce his passing. After a protracted and courageous battle with prostate cancer, he passed peacefully in Johannesburg, South Africa, surrounded by his family.

A loving father, brother, grandfather and friend, our hearts beat with profound loss.  Hugh’s global and activist contribution to and participation in the areas of music, theatre, and the arts in general is contained in the minds and memory of millions across 6 continents and we are blessed and grateful to be part of a life and ever-expanding legacy of love, sharing and vanguard creativity that spans the time and space of 6 decades.  Rest in power beloved, you are forever in our hearts.

We will, in due course, release details of memorial and burial services. Hugh Masekela was someone who always engaged robustly with the press on musical and social political issues. We laud the press for respecting his privacy through his convalescence, and during this, our time of grief. Our gratitude to all and sundry for your condolences and support.

Remembering Hugh Masekela: the horn player with a shrewd ear for music of the day

Trumpeter, flugelhorn-player, singer, composer and activist Hugh Ramapolo Masekela has passed away after a long battle with prostate cancer.

When he cancelled his appearance last year at the Johannesburg Joy of Jazz Festival, taking time out to deal with his serious health issues, fans were forced to return to his recorded opus for reminders of his unique work. Listening through that half-century of disks, the nature and scope of the trumpeter’s achievement becomes clear.

The first was part-mythical: the life of jazz great Bix Biederbecke filtered through Kirk Douglas’s acting and Harry James’s trumpet, in the 1950 movie “Young Man With A Horn”. Masekela saw the film as a schoolboy at the Harlem Bioscope in Johannesburg’s Sophiatown. The erstwhile chorister resolved “then and there to become a trumpet player”.

The second horn hero, unsurprisingly, was Miles Davis. And while Masekela’s accessible, storytelling style and lyrical instrumental tone are very different, he shared one important characteristic with the American: his life and music were marked by constant reinvention. As Davis reportedly said:

I don’t want to be yesterday’s guy.

Much has already been written about Masekela’s life and its landmarks: playing in the Huddleston Jazz Band in the 1950s on a horn donated by Louis Armstrong; performing in the musical “King Kong” in the 1960s and at the Guildhall and then Manhattan schools of music with singer Miriam Makeba; US pop successes in the 1970s and then touring Paul Simon’s “Graceland” in the 80s and 90s.

What is less discussed is the music, and the innovative imagination he has periodically applied to draw it fresh from the flames.

The Huddleston band, plus time as sideman and in stage shows, were the traditional career path for a young musician. But then Masekela broke his first new ground. With fellow originals, including saxophonist Kippie Moeketsi, pianist Abdullah Ibrahim and trombonist Jonas Gwangwa, as The Jazz Epistles they cut the first LP of modern African jazz in South Africa.

“Jazz Epistle: Verse One” (1960) featured band compositions marked by challenging improvisation – “a cross between mbaqanga and bebop”. Mbaqanga is form of South African township jive and bebop an American jazz style developed in the 1940s.

Masekela had also joined the pit band and worked as a copyist for South Africa’s first black musical, “King Kong”.

Robala ka kgotso uncle Hugh. When icons like these pass and you realise their sound permeates your history from birth. Motho Ga a kgoriwe.💔 #RIPHughMasekela

This exposure attracted attention to his talent from potential patrons at home and abroad. Pushed by the horrors of the Sharpeville massacre when the South African police shot and killed 69 people on 21 March 1960, and pulled by donated air-tickets and scholarships, Masekela left for London, and then New York.

In the next two decades, Masekela’s re-visioning of his music took many forms. He found America hard, but with wife Miriam Makeba (the marriage lasted from 1964 – 1966), the production skills of Gwangwa, and the support of American singer Harry Belafonte he proactively introduced audiences to South African music and the destruction of apartheid.

On the ironically titled 1966 live “Americanisation of Ooga Booga”, he demonstrated the creative possibilities of “township bop”. Masekela did this by mashing up repertoire and playing styles from the South Africa he had left and the America he had landed in.

But he was also looking in other directions: in collaborations with other African musicians; towards fusion (with The Crusaders), rock (with The Byrds) and even pop at the Monterey Pop, festival.

That list captures only a fraction of his projects in the 1960s. Some bore instant fruit: his 1968 single, “Grazin’ In the Grass”, topped the Billboard Hot 100 list and sold four million copies; the previous year’s “Up Up and Away” became an instant standard.

In 1971, he teamed up with Gwangwa and Caiphus Semenya for another pan-African vision: The Union of South Africa. In 1972 he explored a stronger jazz orientation on “Home is Where The Music Is” with, among others, sax player Dudu Pukwana, bassist Eddie Gomez, keyboardist Larry Willis and Semenya.

But as the title of “Grazin’ In the Grass” suggests, Masekela was also bewitched by other aspects of Sixties counterculture. He dated his addiction back to the alcohol-focused social climate of his early playing years in South Africa, but by the early Seventies he admitted:

I had destroyed my life with drugs and alcohol and could not get a gig or a band together. No recording company was interested in me…

That depression inspired the song that achieved genuinely iconic status back home in South Africa: the 1974 reflection on migrant labour, “Stimela/Coal Train”.

Foreign critics have handed that status to other Masekela songs, such as “Soweto Blues”, “Gold” or the much later “Bring Him Back Home”. Yet powerful though those are, it is Stimela, with its slow-burning steam-piston rhythm that captured the hearts of South Africans in struggle back home, and still does today. And of course the lyrics:

For me songs come like a tidal wave … At this low point, for some reason, the tidal wave that whooshed in on me came all the way from the other side of the Atlantic: from Africa; from home.

Shortly afterwards, Masekela headed off to Ghana, hooked up with Hedzoleh Soundz, and was soon back in the charts. “Stimela” received its first outing on the album “I Am Not Afraid”, with West African and American co-players including pianist Joe Sample.

By the mid ‘80s, the hornman was back in southern Africa, recording “Technobush” at the mobile Shifty Studio in Botswana, and performing for the Medu Arts Ensemble with a Botswanan/South African band, Kalahari. His music shifted again: roots mbaqanga came strongly to the fore to speak simply and directly to people now openly battling the apartheid regime just across the border.

After liberation and his return home, Masekela once more chose fresh directions. In 1997 he banished his addictions and began to showcase the virtuoso player he could have been 30 years earlier without the distractions of the West Coast. He fronted big European jazz bands, and benchmarked a long musical friendship with Larry Willis with the magisterial Friends.

Before he breathed his last, Hugh Masekela saw the downfall of every single one of the dictators he sang against in his song “Change”—the last being Robert Mugabe. Our entire continent is indebted to him for his unwavering voice for justice. #RIPhughmasekela #AlutaContinua pic.twitter.com/wivqBvCbVM

But his shrewd ear for the music of today, rather than yesterday, also took him into younger company. He collaborated with current stars – including singer Thandiswa Mazwai – often encouraging them to take centre stage. Just before the recurrence of his cancer, he was planning a festival collaboration with rapper Riky Rick.

To cap the transformation, the individualistic rebel of the 60s and 70s became an elder statesman of social activism. In 2001, he established a foundation to help other musicians escape addiction. Once more he foregrounded the music of continental Africa, to campaign against xenophobia. And the return of his own illness became the cue to exhort other men to get checked for prostate cancer.

Other South African musicians have succeeded overseas; many have made one mid-career image switch – but few have shown us, in only one person but more than 30 albums, so many of the faces and possibilities of South African jazz.

‘Blues for Hughie’ from the album, Jazz Epistle Verse One.