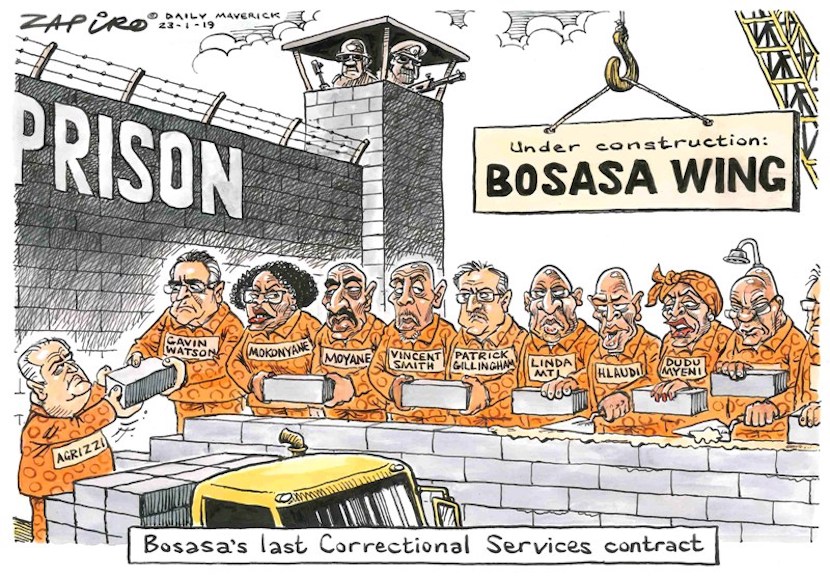 Former Free State Premier and paper benefactor of still-impoverished would-be dairy farmers, Ace Magashule, is diametrically at odds with his hopefully emboldened party leader when it comes to SA’s economic recovery. It all turns around the use or non-use of the phrase, “White Minority Capital,” which Cyril eschews and Ace loves repeating, probably hoping it will one day soon enter the global book of phraseology for leisure reading in the loo of his dream Zuptoid palace. In his latest column, the acerbic Simon Lincoln Reader observes that Ace and Lindiwe Sisulu seem to have grown close politically – although in a sudden bout of nostalgia for principled stalwarts of the struggle, warns her against trashing her family legacy. Echoing a segment of at least one other writer’s contribution to Biznews currently, Reader, in a pre-emptive bid to comfort starry-eyed liberal hopefuls, proposes amnesty for Zuptoid miscreants, given the ANC’s dismal record in disciplining itself. Let’s hope his satire isn’t prophetic. He certainly doesn’t see a revival of the Cape Town textile industry, courtesy of a bulk order of orange overalls for Correctional Services. Just one or two token togs will probably do. – Chris Bateman

Why do people hate Brian Molefe so much?

It is a question that his supporters will inevitably ask in the coming months as the disgraced former “symbol of black excellence” edges closer to criminal charges and possibly jail. Questions like these are designed to distract – to force sympathetic consideration over and above evidence, in his case mounting, a few degrees short of conspiracy. It will be claimed, in his defence, that some of the loathing results from his subscription to Jacob Zuma’s world view – which itself is based more on myth than conspiracy.

But the real reason why people hate Brian is because he is just such an utterly toilet individual. Public opinion – to say nothing of the allegations of corruption – is still overly familiar his breath-taking arrogance; threats he made against journalists, incendiary remarks he made against Transnet pensioners, his expeditious lying and the pathetic, all-fall-down the day the truth began to emerge are remembered as if they occurred yesterday. This makes him simply unlikeable.

How do you know when a politician is lying? Whilst there is some merit in the “when-their-lips-move” answer, I’d like to bring your attention to the behaviour of Ace Magashule at the Walter Sisulu commemoration lecture on Saturday.

The meaningless phrase coined by academics and exploited by Bell Pottinger, “white minority capital” should no longer feature in the ANC’s lexicon, but Ace is attempting to build consensus toward a blanket political solution for those implicated in state capture – and WMC is still something of a blunt instrument.

His flirtation with Lindiwe Sisulu is more revealing. At the time of writing her political fortunes have suffered, entirely of her own making, but I still consider her sensible enough to understand that siding with Ace and his quarter would be to instantly trash one of the continent’s most revered political dynasties, much worse than a high profile Venezuelan defection.

Having sacked one racist idiot (previously declared a fugitive from justice by American authorities Paul Ngobeni), I presume Lindiwe knows Ace doesn’t care about her or the principles. But he does care about amnesty.

So it would be irresponsible not to entertain the prospect of amnesty in some form issued to some of the state capture offenders. Reluctantly I’m doing so to avoid disappointment given the ANC’s appalling record when it comes to disciplining itself.

It’s just a question of who, like Tony Yengeni, gets thrown under the bus. As dispiriting as it is to accept we may never get to see Dudu Myeni in orange overalls, much more dangerous is believing that prosecutions here are guaranteed.

Two exceptions against my suggestion that all politician’s should pass supervised mental health assessments before they create Twitter accounts: Helen Zille and Ghaleb Cachalia. In fact I wish these two would tweet more, particularly about the Welsh.

Whereas apartheid excluded and dehumanised, ANC privilege has stolen from both the present and the future. But the logic applied by Helen’s critics, such as the Daily Maverick’s impressively foreheaded Rebecca Davies stands to reason that the “lived experience” (that’s a wankerese social justice phrase) of black people reduces their faculty to determine the difference between right and wrong – which is basically just another way of saying all the things Jacob Zuma and his friends say – ergo white people are actually responsible for state capture. So suck on that.

The European Elections are presently underway. The full results – published on Sunday evening.

Across the road from my voting station, pitched on a bank of grass, a small group of pro EU supporters adorned in flags and waving banners shrieking warnings about the “far right”.

This charge, once used upon Nazis, Neo Nazi’s and Fascist groups established upon the criminal practises of racism, misogyny and homophobia is now apparently applicable to people who do not subscribe to every single axiom determined by the contemporary fashionable. If, for example, you detest the awful manner in which Caster Semenya has been treated and support gay rights – but are alarmed at the trend of gender re-assignment surgery in children below the age of ten, then, sorry Adolf, but get the hell off our street. If you support women being paid equally but would prefer integration over unfettered immigration – you’re basically Genghis Khan, and look here bastard, if you so much as question any climate disciple – including ones who have been exposed fudging their numbers in pursuit of MORE grants – you will be renditioned to chop-chop square in Riyadh immediately.

Prior to 2016, “far right” was as scarce a phrase in Europe as “white monopoly capital” was in South Africa. But it has form now, is cast indiscriminately and its followers are increasingly deranged. Essentially what these groups have done to the charge is what the ANC did to “racist” – i.e obfuscate, cheapen, repurpose it.

Calling Nigel Farage’s Brexit Party “far right” is a remarkably stupid thing to have done. But don’t listen to me – wait for Sunday night.