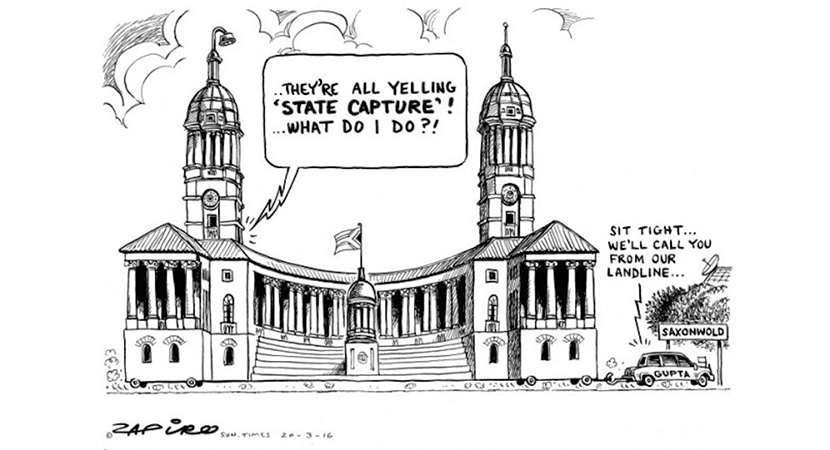 President Jacob Zuma doesn’t have any intention of stepping down over allegations of state capture. That much was clear when he deflected questions in Parliament this week about his involvement in state tenders, successfully outsmarting his detractors. In a cunning move, he hid behind South Africa’s Public Protector Thuli Madonsela, citing her investigation into related matters as a reason he could not respond in detail to questions posed by opposition politicians. Through his responses, South Africa was once more reminded that the president is the ultimate Teflon-coated man – nothing sticks. Zuma has consistently denied his involvement in helping to build the business empire of the rich Indian Gupta family. The DA, EFF and others are unlikely to shake admissions out of the controversial president, though Madonsela has promised to deliver a report on Zuma’s relationship with the Gupta family within weeks. Also in Parliament, Zuma ducked and dived around questions about Mosebenzi Zwane, the mineral resources minister who recently claimed the cabinet had decided on an investigation into banks that had withdrawn support for the Guptas. Zuma refused to be drawn on how he was dealing with that matter with Zwane, who so far remains in situ even though the cabinet issued a statement refuting his claims. – Jackie Cameron

Cape Town – Opposition party parliamentarians failed to get President Jacob Zuma to admit to any form of alleged state capture resulting from his friendship with the Gupta family.

On Wednesday, Zuma submitted written parliamentary replies to several questions posed by Members of Parliament, ranging from alleged visits to the Guptas’ residence in Saxonworld to alleged links between Department of Mineral Resources Minister Mosebenzi Zwane and the Guptas.

It is alleged that the Guptas used their friendship with Zuma to build their business operations with the use of government tenders. The Guptas and Zuma have on several occasion denied such claims, and have requested that they be tested in a court. The alleged state capture is under investigation by the public protector.

The Democratic Alliance asked Zuma if he or a member of his Cabinet visited the Gupta family compound in Saxonwold in Johannesburg on September 20 2015, just before Zwane became mineral resources minister.“Did the discussion include the subsequent reshuffling that happened in the Ministry of Mineral Resources portfolio?” they asked.

“If so, what was the nature of the discussions regarding the appointment of the new minister of mineral resources; if not, is he aware of any member of his Cabinet visiting the Gupta family compound on September 20 2015; if so, who made the visit?”Zuma’s response was simply that the presidency “was informed by the public protector that she has received complaints and requests that she should investigate this matter or related allegations”.

Question to President Zuma about a visit today the Guptas and his "reply" – if you can call it that… pic.twitter.com/gJkQ8SEilt

The DA then asked if Zuma was ever informed of the Guptas offering Cabinet positions to any ministers during his term of office as president.

“The appointment of members of the cabinet both ministers and deputy ministers remains my sole prerogative as president,” Zuma responded.

“I learnt about the statement attributed to the deputy finance minister about the job offer in the media. I would like to reiterate that the task to appoint ministers or members of the Cabinet is the constitutional prerogative of the president of the Republic.”

DA finance spokesperson David Maynier wanted to know whether Zuma would take action against Zwane after he erroneously released a Cabinet statement saying the inter-ministerial committee recommended that Zuma should launch an inquiry into the blacklisting of the bank accounts of the Guptas’ companies.

“The statement issued by … Zwane on 1 September 2016 … was issued in his personal capacity and not on behalf of the task team or Cabinet,” Zuma said.

“I reassured the public, the banking sector as well as domestic and international investors of government’s unwavering commitment to the letter and spirit of the country’s constitution, as well as in the sound fiscal and economic fundamentals that underpin our economy.

“I also informed Parliament on September 13 that I was engaging Minister Zwane regarding his statement.” – Fin24