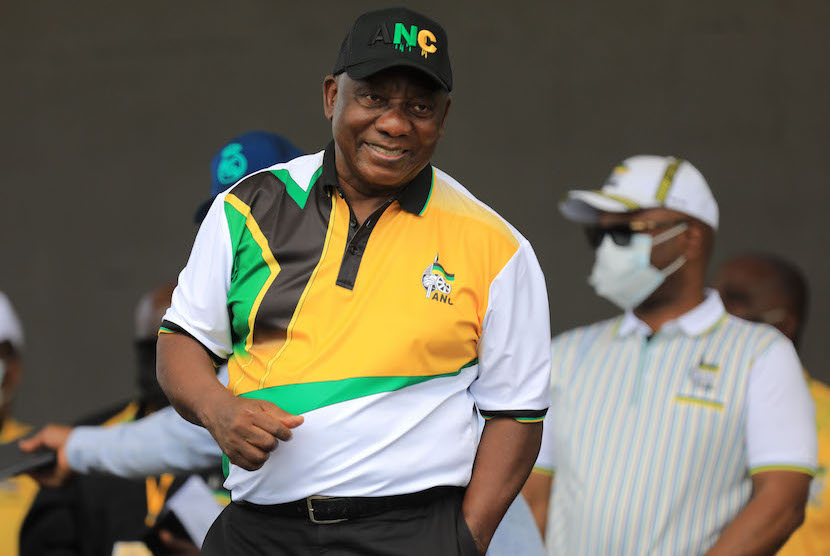 Helen Zille’s predictably controversial speech to the large assembly at BizNews’ Drakensberg retreat last month continues to evoke responses, this time from no other than constitutional expert and founder of Accountability Now, Paul Hoffman. He differs from what he terms her ‘hopeful assertion’ that President Cyril Ramaphosa is a constitutionalist at heart and proceeds to persuasively argue why, with some fascinating, telling examples. After outlining the three main factions of the ANC, he speculates on which one Ramaphosa belongs to before reminding us of his tepid response to widely agreed-upon extra-party anti-corruption measures. Besides his well-illustrated anti-constitution behaviour, this is perhaps his Achilles’ heel. I say that because I suspect Ramaphosa has done a quick internal cost-benefit calculation on instituting at least the Glenister ‘Stirs’ criteria and found that doing so would be counter to party ideology and cost him his job in a corruption-riddled environment. Another way of representing Hoffman’s argument would be to say we have a compromised president. Story courtesy of Politicsweb. – Chris Bateman

Is the president a constitutionalist at heart?

An interesting contretemps is being waged in the columns of Politicsweb between Oxford don, Bill Johnson and veteran politician Helen Zille following her gig at the Drakensberg get together organised by Biznews.com.

This note is concerned only with the question posed in its title: is the president a constitutionalist at heart?

Rather than making the answer to the question a matter of opinion, it is better to examine the evidence either way in order to arrive at a defendable response to what is an important question in these troubled times.

The evidence in favour of a ‘yes’ is to be found in a variety of sources. Cyril Ramaphosa and Roelf Meyer are credited with being the main authors of the compromise which gave birth to the Constitution. Ramaphosa was secretary general of the ANC back then and favoured by Nelson Mandela to be his successor. That was not to be; Thabo Mbeki took that role and Ramaphosa entered the hurly-burly of the world of business to emerge a BEE billionaire.

If he was negotiating in good faith with the representative of Afrikaner nationalists on behalf of African nationalists, then Ramaphosa would regard himself as bound by the compromise reached. That would make him a constitutionalist at heart, as proposed by Zille.

Ramaphosa, when he re-entered politics as deputy to Jacob Zuma, swore an oath to uphold the Constitution and all other law. If he takes his sworn statements seriously, that oath would have him firmly in the constitutionalist camp. The rule of law, the independence of the judiciary and a free press all remain reasonably intact on his watch (having been seriously threatened on that of his predecessor who is clearly not a constitutionalist) all evidence of fealty to constitutionalism.

Ramaphosa himself is an enigma when it comes to assessing his commitment to the Constitution. He wants to retain cadre deployment in the public administration and SOEs, even though it is clearly illegal to do so.

Recently he is recorded as saying, almost in the same breath, that we have the best Constitution in the world and then insisting on the importance of pursuing the various goals of the NDR (national democratic revolution), goals which are wholly inconsistent with the Constitution as has been demonstrated in the past.

When he was introduced to the National Assembly in 2018 as the ANC candidate to succeed the disgraced Jacob Zuma, both his proposer and seconder were at pains to point out that he is a “true revolutionary”. Some analysts claim that the ANC governs by sleight of hand, paying lip service to the Constitution while waiting for the propitious time to pounce by rolling out the NDR. This involves a close analysis of the ‘balance of forces’ and the use of ‘dexterity in tact’ to arrive at the socialist nirvana contemplated by the NDR but never reached anywhere in the world where its ideology has been tried. The words in quotes are drawn from the ANC ‘Strategy and Tactics’ documents.

Ramaphosa’s simultaneous championing of both the Constitution and the NDR can be explained by reference to these claims.

There are at least three main factions in the ANC regarding ideology. There are many more minor factions built around the venality and greed of their rent-seeking members; any or no ideology is fine with them for so long as they are allowed to continue looting with impunity.

The first faction is comprised of those members of the ANC who take the values of the Constitution seriously. Professor Kader Asmal, a cabinet member who called for the scrapping of the NDR and resigned rather than vote for the demise of the Scorpions, was one of these. Judges and professionals who are known to have close ties with the ANC are also in this grouping. Judges obviously take their oath of office more seriously than some politicians within the broad church that is the ANC. Somewhat surprisingly, the leadership of COSATU has strongly endorsed constitutionalism in the wake of the heresy expressed by Minister Lindiwe Sisulu who now thinks the Constitution is a mere “palliative”.

The second main faction comprises those who have fully embraced the NDR and feel its time has come. They are mainly in the RET faction and in the SA Communist Party, which has a ‘cuckoo’s nest’ relationship with the ANC. The external wing of this faction is the breakaway EFF, which is unapologetic about its revolutionary agenda.

The third faction is made up of those who talk revolution but walk constitution. Zille apparently pins her hopes on Ramaphosa being in this faction if he is not in the first-mentioned faction. She may be wrong about the extent of his commitment to the Constitution because she has not been paying sufficient attention to the evidence available out of his own mouth.

He defends the NDR as being compatible with the Constitution. Clearly it is not. Here are the contortions required of him to do so, in his own words written in response to a complaint by FW de Klerk that he did not sign up for the NDR:

“Those who wrote the Constitution understood that equality cannot be achieved by proclamation. It is something that has to be achieved progressively through deliberate and sustained action.

Since the divisions in our society are predominately based on race, it stands to reason that foremost among our concerns should be the achievement of racial equality. At the same time, we must work to eradicate the related injustices of gender discrimination and income inequality.

Over the last 20 years, the policies and programmes of the ANC have been directed towards precisely these tasks. These include the commitment of resources towards meeting the needs of the poor. The provision of free houses, electricity, water, sanitation, roads and other social infrastructure are all part of the economic empowerment of the black majority. So too is the expansion of access to education. More than 80% of schools are now no-fee schools. The proportion of university students who were African increased from 49% in 1995 to more than 66% in 2010. Over the same period, university enrolment more than doubled.

Alongside these programmes, which have a had a tangible impact on the lives of millions of people, the ANC has also pursued policies around employment equity and black economic empowerment. These too have borne positive results. The black middle class doubled in size between 1993 and 2008. There has been a 325% growth in the proportion of blacks in senior management since 1996.

This is not nearly enough to address the enormity of the apartheid legacy, but it demonstrates that the ‘dangerous ideology’ of the ANC is progressively redressing the injustices of the past.

De Klerk decries the ‘ideology of demographic representivity’ while seeking a society ‘in which race is no longer an issue or a source of division’. What he does not seem to realise is that race will continue to be an issue for as long as there are such stark disparities in the material conditions of black and white South Africans. Race will remain an issue until all echelons of our society are demographically representative.”

The truth is that SA has never been more unequal than it is now and the levels of unemployment and unemployability have never been higher due to the collapse of the economy and the dysfunction in the education system at all levels. Demographic representation is required by the Constitution in the judiciary and the public administration; it is not required in ‘all echelons of our society’ except in NDR-speak.

Another front on which the commitment of Ramaphosa to constitutionalism is suspect is his tepid response to the need for reform of the hollowed out criminal justice administration, which was all but destroyed by Jacob Zuma to facilitate his state capture project.

Accountability Now has long championed the establishment of a new Chapter Nine institution to prevent, combat, investigate and prosecute serious corruption. In August 2021, it presented Ramaphosa with suggested draft legislation. He has not responded in any way.

This passivity of the president is strange as his own political party, the ANC, passed an urgent resolution in August 2020 calling on the cabinet to set up a stand-alone, permanent, independent and specialised unit to counter corruption. The IFP has been in favour of the Chapter Nine solution since at least 2019, and the DA embraced it earlier this year. The parliamentary drafters are hard at work on the DA’s version of the reforms that would be necessary.

The optimal constitutionally compliant solution will emerge from the crucible of parliamentary debate. That debate should be scheduled as soon as is humanly possible. Foot-dragging is only working to the advantage of the corrupt and against the interests of the country as a whole. There is no rocket science in applying the Constitutional Court’s Glenister litigation criteria to the suggestions of all parties to arrive at a best-practice solution to the challenges to society that are posed by the rampant corruption in SA.

The president is a qualified lawyer and a seasoned politician. He knows that the government is bound by the Glenister ‘Stirs’ criteria, (S for a specialised unit dedicated to investigating and prosecuting the corrupt; T for properly trained staff, which is equipped to do so; I for independence from political influence and interference; R for guaranteed resources sufficient to the task; and S for security of tenure of office).

Ramaphosa also knows that the Stirs criteria are not in place, and that steps need to be taken to reform the criminal justice administration’s capacity to deal effectively and efficiently with corruption. Surely, if he is a constitutionalist at heart, he would afford priority to reform of the criminal justice administration so as to render it constitutionally compliant by properly implementing the decisions of the highest court in the land, itself a creature of the Constitution.

A conspectus of the evidence would seem to suggest that Zille is engaged in wishful (perhaps hopeful) thinking when she asserts that Ramaphosa is a constitutionalist at heart. Perhaps she has other evidence upon which she bases her opinion.

David Bullard is bound to remind readers that his nickname for Ramaphosa is ‘President frogboiler’. Constitutionalists come in many shapes and sizes, but none of them are frog boilers.