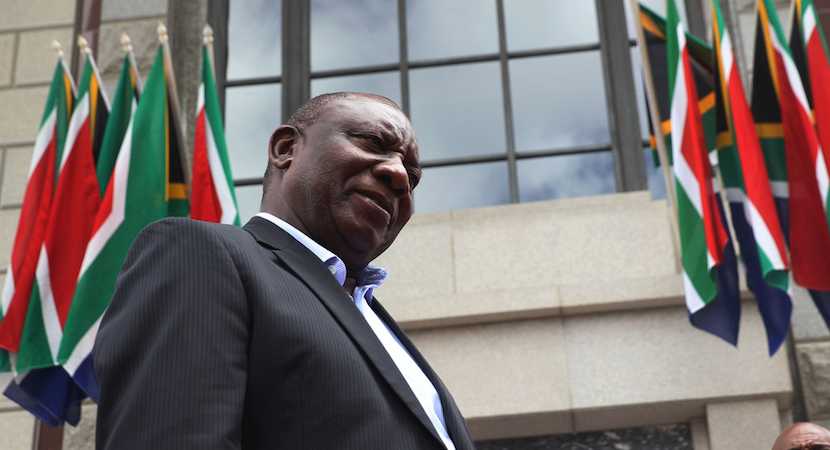 We get daily reminders of what damage that Zuma-era caused to our economy. The dire situation of Eskom and the other state-owned enterprises such as South African Airways that appear to be unfixable and the appointment of dodgy characters in President Cyril Ramaphosa’s Cabinet because of power politics in the ANC. Added to that a clear agenda by Zuma supporters to undermine everything Ramaphosa does and they clearly do not care if it tanks the Rand or scares investors away. Should I mention the one thing that we could feel proud about, our ability to pummel other sports teams that we appeared to have lost? Theuns Eloff of the FW de Klerk Foundation acknowledges that all this has led to a general feeling of “despair” in the country. He however says it was never going to be a quick fix and we should have a cool head and give Ramaphosa a chance. Eloff’s argument is that although the ANC headquarters could remain a problem, Ramaphosa is firmly in control of the other power blocs, Parliament and the Cabinet on the one hand and the Constitution and its institution on the other. These he could use to neutralise Luthuli House. Eloff believes there is light at the end of the tunnel. First published on Netwerk24 in Afrikaans. – Linda van Tilburg

One can almost feel the despair of the South African population. Among the reasons for this are an unprecedented increase in the spate of farm attacks and murders, Ace Magashule and Co. meddling with the Reserve Bank and trouble with infrastructure and dysfunctional municipalities in almost every town. And then having the Proteas messing about at the World Cup is no help either! Many South Africans are asking, “What is Cyril doing about this? He is the President now!”

And that’s partly true – our President is in a better place than a year ago as far as party politics are concerned. He followed up his victory at Nasrec (53%) with a 57.5% victory at the polls in May. He is no longer an “interim” President, but one that has led his party to a victory (and probably single-handedly rescued them from a defeat). He reduced the Cabinet and got all rid of all the biggest Zupta crooks. He promised (almost like Madiba of old) to be a President for all the people of South Africa and not just for the ANC. But, unfortunately, it doesn’t mean he is untouchable and can do what he wants.

There are a few stumbling blocks on his path. And to understand what’s happening now, one needs to know what these stumbling blocks are. There are still Zuma supporters in the Cabinet – and especially among the Deputy Ministers. President Ramaphosa had to make concessions to various interest groups and this, among other things, resulted in many more Ministers (and especially Deputy Ministers) than he wanted. Even among those that now support him (but also helped get rid of Mbeki back in the day), there are some Ministers who are not the epitome of efficiency and integrity. Only Ramaphosa’s leadership and drive will force them to take action.

The second stumbling block is that, though there may be a new Cabinet, the people who will apply (hopefully) new policies, are still the same old officials – and the majority of them are the product of the toxic mixture of racial transformation and cadre deployment. It will take time to get better officials appointed on merit. This also applies to the South African Police Service, and getting a better grip on crime (and on farm attacks and murders). It is also well-known that much of the public service is still severely affected by corruption and that State capture is only now beginning to decline. Proper lifestyle audits are the only way in which the corrupt can be shown the door in the medium and long term.

Thirdly, it would still take longer to make a significant difference at the local level – that is how the three spheres of government work across the world. President Ramaphosa’s (and any President before and after him) ability to relieve the Mayor and Councillors of a completely dysfunctional municipality such as Lekwa (Standerton) of their duties, are extremely limited. In terms of Lekwa, which no longer even has the capacity to pump enough water for the community and businesses only a few kilometres from the Vaal River, and where the homeless sleep in the municipality’s offices at night, he can only work through the (also inept) provincial government and ANC structures. And it takes time…

The fourth stumbling block is that President Ramaphosa faces serious opposition from within his own ranks. The current face of this opposition is the ANC Secretary-General, Ace Magashule. He has already publicly criticised Ramaphosa before and after the May election and belittled his role in the ANC’s victory. He also unleashed the current storm within the ANC through unsolicited statements about a changed mandate for the Reserve Bank. He was smart to link it with the ANC’s declaration of unemployment as a national disaster. But he was not smart enough to use the right term for printing new money: “quantity easing”, instead of “quantitative easing”. According to Ace and fellow populists, unemployment will be reduced if more money is printed. Heaven help us…And the grave danger posed by Ace is that he will increasingly try to hamper President Ramaphosa’s task further by trying to undermine him from Luthuli House (where Ace is in charge) and derailing his reform plans. For this, Ace is gathering a group of malcontents who were left off Cabinet and parliamentary lists (read Bathabile Dlamini) around him in Luthuli House. There they can conspire together in the short term but also the medium term, with a view to the ANC’s internal processes and election conference that lies ahead in 2022.

Against the backdrop of these stumbling blocks on Ramaphosa’s path, one should never have expected the damage of the nine wasted Zuma years to be reversed soon. President Ramaphosa cannot put Ace in jail, as there are legal proceedings to be followed. President Ramaphosa also cannot just show Ace the door – he was elected by the ANC’s elective conference. Only when Ace is found guilty of a crime, can he be replaced as Secretary-General.

What can be done? President Ramaphosa has three “power blocs” in which to operate. Each of these three power blocs is unique, and like circles, they overlap.

The first power bloc the is ANC’s headquarters in Luthuli House. This is where Ramaphosa’s party political mandate comes from – and he can’t alienate himself from the majority of his own party. As a result of the outcome of the Nasrec election conference (and specifically the election of Ace Magashule as Secretary-General and Jessie Duarte as Deputy Secretary-General) he is not in charge of Luthuli House. He will have to take this factor into consideration and manage it at all times.

The second power bloc consists of the Legislature and the Executive: Parliament and the Cabinet. Here Ramaphosa is in control, with the majority of the ANC parliamentarians and Cabinet supporting him – even if only because he is now firmly seated in the presidential chair. He can use this power bloc effectively, but still cannot act against the wishes of the majority ANC caucus members. He will have to convince them of each reform step. And there may also be negative influences coming from Luthuli House. But government policy (as opposed to ANC policy) is made and implemented here. This is where Ramaphosa has real power.

The way President Ramaphosa manages these three power blocs will play a decisive role in his success (or failure). He will have to make use of the power blocs where he is in control, or where he has a strong mandate, to neutralise the power bloc of Luthuli House. Applied to the Ace Magashule case, he will not win the fight in Luthuli House (at least not in the short term), but he will, on a policy level, have to use the legislative and executive power bloc to reduce Ace’s comments simply to those of an ANC official. On another level, he will have to allow the prosecution mechanisms at the State’s disposal to test the crimes of which Ace is accused in court. This is the only way to remove Ace from Luthuli House in the medium term.

President Ramaphosa will have to play this ongoing game of chess and the underlying power struggle while he works against the other stumbling blocks to his reform strategy. It is no easy task, and will take time and require excellent timing.

What does this mean to ordinary South Africans? Take these stumbling blocks and power blocs into consideration in your assessment of our country’s current situation. It is not an ideal situation, but through it, there can be progress made towards a better South Africa. Do your job and look after your responsibilities, among other things by taking even better care of your own and others’ safety. Recognise that millions of other South Africans feel like you do, have the same concerns, and at times, much worse experiences. Above all, keep a cool head – there’s light in this dark tunnel, full of battles over stumbling blocks and inside power blocs.