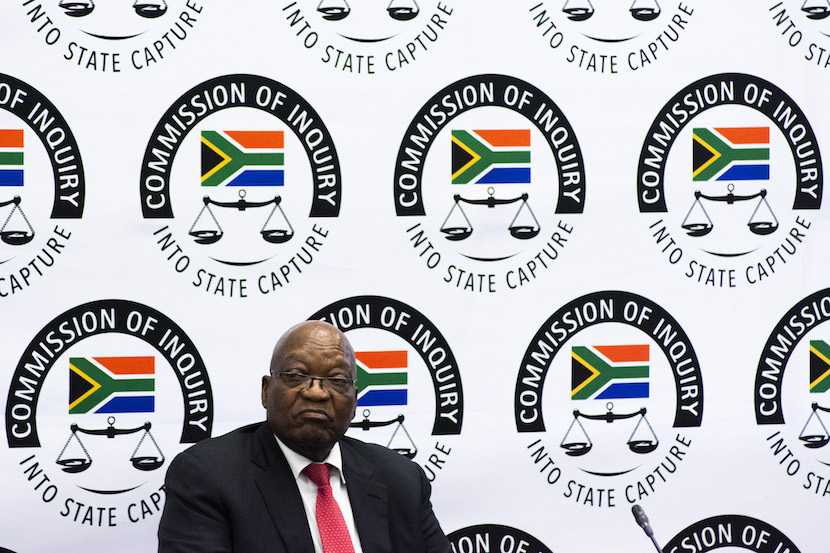 Whomever advised Zuma on how to handle himself when providing testimony to the Zondo Commission of Inquiry into State Capture needs their head read. The first rule when you’re on the record, is to stick to a script: keep it short and clear. Zuma’s testimony was the precise opposite. Another critical rule, especially when you’re appearing on live television, is to pay close attention to your body language. Nowadays a few minutes on YouTube turns anyone into an expert on “exposing” liars. Zuma’s testimony was classic deception down to the fake cough, mouth cover and nose touch. In this episode of the Rational Perspective podcast, we draw on Anthony Butler’s excellent Ramaphosa biography to provide context to an incoherent couple of hours when SA’s fuzzy minded former president increased his prospect of incarceration. – Alec Hogg

This is The Rational Perspective. I’m Alec Hogg.

In this episode Jacob Zuma at the Zondo Commission. Like thousands of other South Africans I watched our former President Jacob Zuma rambling, often incoherent testimony to the Zondo Commission today with a mixture of horror and amusement. Horror that my nation had allowed itself to be led for nine years by this fuzzy mind; amusement at the way the deeply implicated politician dug himself ever deeper into a hole.

Whomever advised Zuma on how to handle himself at the inquiry needs their head read. The first rule when you’re on the record is to stick to some kind of a script. Keep it short and clear. Zuma’s testimony was the precise opposite.

Another critical rule especially when you’re on live television for a couple of hours is to pay close attention to your body language. Nowadays a few minutes on YouTube turns anyone into an expert on exposing liars by the way that the body involuntarily behaves. Zuma’s testimony was classic deception down to the fake cough, mouth cover and nose touch.

At the height of his power. Zuma enjoyed a reputation as having dirt on his enemies – an asset he apparently built up during the struggle years. He wielded that apparently fearsome weapon at the commission. But it turned out to be a cardboard assegai.

Zuma claimed Ngoako Ramatlhodi, his former mining minister, was an apartheid spy and accused another enemy, former justice minister Penuell Maduna, of a similarly dastardly act. The irony that Zuma himself had appointed Ramatlhodi to high office was somehow lost on this embattled 77 year old.

They were quick to deny the allegations, even offering to take lie detector tests to prove their innocence.

So who is telling the truth? How good is Zuma’s intelligence?

There’s a clue in Anthony Butler’s excellent biography on Cyril Ramaphosa. Here’s a telling passage from Chapter 15. It involves the now South African president’s application to become a member of the South African Communist Party.

“While Ramaphosa’s application was in process, Maharaj insisted that he should meanwhile be treated as if he was already a member of the party. In Maharaj’s view, Cyril was comfortable with the positions of the party and the Vula commander had interacted with him repeatedly without a single breach of security occurring.

The application was however never to result in membership. Fate intervened in the unlikely manifestation of Jacob Zuma who had just been appointed to the Politburo. Zuma was a counter-intelligence specialist and he was tasked with performing a background check on Ramaphosa to ensure he was not an infiltrator.

This was the proper course of action. All the same, Zuma was already sympathetic to the theory – a precursor to the later culture of mediocrity in the ANC – that any accomplished young member of the liberation movement was quite likely a spy. If such a youngster was not in the employ of foreign powers or the state, how else could he have acquired his exceptional skills.

Zuma took a very long while to report back. When he did so, he claimed that there was security question marks around Ramaphosa’s past. Maharaj was outraged, given his complete confidence in Cyril and the indisputable fact that Maharaj himself had not been arrested despite associating with him. The regime, he observed, would have been thrilled to have secured his scalp.

Eventually the Vula boss met with Zuma to hear his ‘evidence’ for himself. It transpired that Zuma’s doubts rested on the already well-known fact that Cyril, like so many others, had once been imprisoned and released without being charged. Maharaj told Zuma he was not satisfied with the report and sent him away to investigate. Further events were soon to overtake these lumbering inquiries and the opportunity to join the party was lost.”

That was from the audio book which I voiced on Ramaphosa’s biography. It is worth repeating a key sentence: “Zuma was already sympathetic to a theory that any accomplished young member of the liberation movement was quite likely a spy.”

Hmmm. Further context on Zuma’s unrepentant attitude displayed so obviously in his testimony today comes in Chapter 26 of Butler’s biography.

Let’s have a listen:

“Zuma was becoming increasingly erratic as his second term staggered from crisis to crisis. Towards the end of 2015 there were rumours that he might be considering a third term for himself as ANC president. From his Luthuli House redoubt, he would then apparently become the power behind the throne of his successor as state president, Nkosazana Dlamini-Zuma. This was not an original proposition: Zuma’s predecessor as ANC president, Thabo Mbeki, had likewise been ‘persuaded’ in 2007 to seek a third ANC presidential term at Polokwane.

Mbeki likewise made plans to shift government officials to Luthuli House and to run the country from ANC headquarters. He too chose Dlamini-Zuma as his Union Buildings puppet, also claiming that a woman president was an idea whose time had arrived.

A Zuma third term bid therefore lacked originality. But it also lacked credibility for another reason. Zuma would be seeking a third term in his mid 70s rather than in his mid 60s as was the case with the Mbeki. The fact that some Zuma supporters were willing to contemplate such a course of action indicated their deep concern with a candidate Zuma himself had imposed on them.

Nkosazana Dlamini-Zuma had become the Zuma faction’s front runner largely because the president insisted that she must be. Stage managed endorsements from the ANC’s youth and women’s leagues were quickly followed by the belated conversion of patriarchs from the most corrupt ANC provinces to the cause of women’s advancement. Dlamini-Zuma’s ministerial failures were airbrushed out of history and her good works at Home Affairs was presented as little short of miraculous.

In truth many of her faction’s supporters remained skeptical about her suitability for the ANC or state presidency’s.”

Lest we forget, almost Putin like, Zuma had no qualms about changing his Cabinet by ousting those who displeased him. We hear this a little later in chapter 25 of Butler’s biography.

“During Zuma’s second term when Ramaphosa was silent about these abuses of power, Zuma rotated his ministers mercilessly, regardless of the cost to coherent government. He had no qualms about removing one incumbent after another from portfolios such as Energy, if they failed to realise his personal agenda in Zuma’s long march across state institutions. Moreover, he penetrated the machinery for intelligence gathering and the state’s investigations and prosecutions machinery, each of which could be used to harass opponents and to protect allies from legitimate legal action.

This destruction of public institutions, of course, was only possible because it also served wider ANC interests.

The South African Revenue Service source and the National Treasury had been on Zuma’s radar during his first term as sites of resistance to his various enrichment and patronage projects. SARS was an unusually effective institution that had mostly managed to stay outside partisan and factional politics in the Mbeki era. Nevertheless it had the capacity to collect wide ranging intelligence about the personal and commercial activities of business people and politicians. Zuma tried to put an end to this threat by appointing an old crony Tom Moyane as SARS commissioner in September 2014. Moyane arrived with a prearranged plan to destroy much of the institutional capacity of the Revenue Service and to render it no longer a threat to Zuma’s political and business allies.

On the 9th of December 2015, Zuma took a step further, firing finance minister Nhlanhla Nene and replacing him with a virtual unknown David “Des” van Rooyen. Van Rooyen came to Treasury with a plan he did not understand, with special advisers he did not seem to know and with an agenda to remove established public servants who had frustrated corruption in the parastatals and in power procurement. This resulted in an unprecedentedly negative reaction in the financial markets, something Zuma had apparently not anticipated. The currency plummeted and ANC aligned business people inundated the movement’s leadership with demands that the decision be reversed.

It is difficult to escape the conclusion that Zuma was not just poorly informed but duped into taking an unsustainable decision. He was obliged to remove Van Rooyen within days and, bounced by the ANC top leadership including presidential contenders Ramaphosa and Mkhize, into accepting the reappointment of Pravin Gordhan to the position. Gordhan would prove to be a thorn in Zuma side and a rallying point for an anti-Zuma coalition in the ANC and the state as well as in wider civil society.”

Appropriate context as South Africa awaits the cross-examination of a man under whose watch the country lost a staggering R1.5trn. That’s the number quantified by Hermione Cronje, the recently appointed deputy director of the National Prosecuting Authority.

In Brazil former president Lula da Silva, who presided over plunder of their public purse, is serving a 12 year sentence with dozens of his political cohorts also behind bars. While he was being tried, Lula’s supporters gathered in the streets to proclaim his innocence and sway the court. Much like the Zuma fan club did in Johannesburg today.

This has been the rational perspective until the next time. Cheerio.