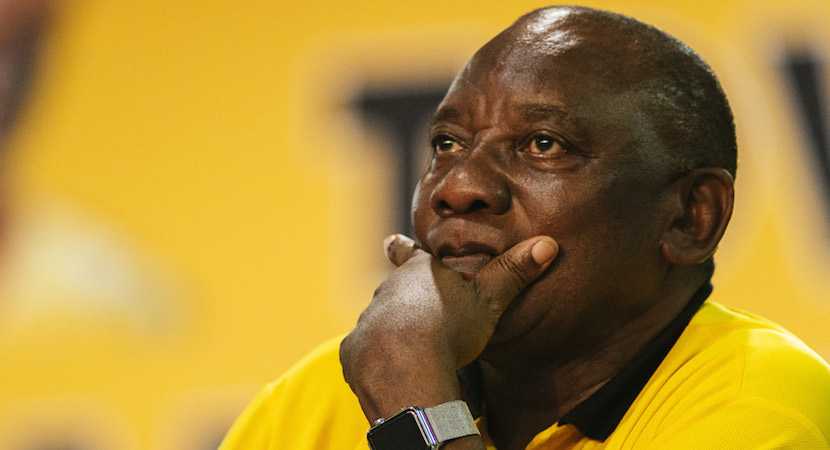 CAPE TOWN — OK, so there we have it. President Cyril Ramaphosa says those exposed as inept, dishonest and corrupt but nevertheless included in his party’s election list have yet to be found guilty in a court of law – to which they will be fully answerable going forward. Looking ahead while humbly correcting the mistakes of the past is now the ANC’s central election theme. Some cynics say this translates to stumbling backwards, shouting progress. Stout members of the ruling party, no matter their private opinion or faction, will assert, like Cyril, that the party list is an outflow of ground-up democratic processes. The branches and districts have chosen and the leadership must respect that. The DA on the other hand, says the list proves Cyril’s New Dawn is false, exposing how little power he really has. We can only hope that the President is playing the long game, appeasing the imbedded Zuptoid enemy while trusting his mandate will strengthen at the polls. The vital question is; will he rely on the tedious criminal justice system to deal with the Mokonyane’s (No 10), Dlamini’s (No 14), Gigaba’s (No 23) and Zwane’s (No 75) of his party, or will he clean house first? Story courtesy of the Daily Maverick. – Chris Bateman

“Watch this space as we move forward,” President Cyril Ramaphosa said in Soweto on Thursday while campaigning door-to-door ahead of the 8 May elections.

He had just finished speaking about the ANC’s process of rejuvenation, renewal and the lessons it has learnt from its mistakes when he was asked about the compromised candidates included in the party’s list of nominees for Parliament.

“To us as an organisation, as we move forward we obviously want to make sure that we continue to have people who are going to serve the interests of our people,” he said.

The ANC’s list submitted to the Electoral Commission of South Africa (IEC) on Wednesday has not been released, but Secretary-General Ace Magashule has confirmed it includes some of the party’s most controversial leaders such as Nomvula Mokonyane, Mosebenzi Zwane, Malusi Gigaba and Bathabile Dlamini.

“We are a broad movement. We are a democratic movement and the membership of the ANC, if you remember how we chose all the representatives, they were chosen from the ground. We are a party that does not impose representatives from the top,” said the president.

“They were chosen from the bottom by the membership of the organisation and we must respect the democratic process. And the membership chose them knowingly, saying that we will allow all the other processes to unfold and if people are found guilty, guilty of criminal conduct, of misbehaviour, they will be dealt with through the criminal justice system, and that washes people out.”

Ramaphosa took a similar line to Magashule, who told reporters on Wednesday that anyone can be nominated to Parliament unless they’ve been convicted of an offence and sentenced to more than 12 months in prison.

Magashule said members who had been nominated but were involved in controversy defended their right to stand for Parliament and did not want to step aside.

Bathabile Dlamini says she's on the ANC election list because it's "the will of the people". To be fair, she hasn't specified which people. It's possible two ANC cadres walked into her office, shook her awake, wiped her down and said, "We want you on the list."

DA spokesperson Solly Malatsi said the ANC list proves Ramaphosa has no power to implement his “new dawn”, adding, “These are individuals who belong in prison, not Parliament.”

Ramaphosa spent the afternoon in Soweto going door-to-door in Orlando, with Gauteng Premier and provincial ANC Chairperson David Makhura, listening to residents’ concerns and encouraging them to vote for the ANC.

He claimed the party had significantly improved the quality of living in the City of Johannesburg, which was now being undermined since the DA-led coalition took power in 2016. In particular, he claimed refuse removal has worsened under the new municipal administration.

“Many of the people in Gauteng live in poverty, but many more have exploded into the middle class and they know that was what the ANC sought to achieve. The poor also know that we’ve put their interests ahead and we’re going to address these interests,” said Ramaphosa.

The ANC's 2019 election list is so cringeworthy. All the #StateCapture implicated persons are on this list. Voting for the @MYANC means voting for corruption! @CyrilRamaphosa's new dawn is more like a doomed dawn!

Since winning the ANC presidency in 2017, Ramaphosa has emphasised the need to acknowledge the party’s mistakes and address them.

“We’ve made some missteps and we admit that openly, and that is what endears us to our people. Because when a political party has made mistakes and it admits that it has made mistakes, the people feel closer to it because we are not arrogant. We are a humble party,” he said.

“The ANC, having been very honest with where it made mistakes, is saving itself from the mistakes of the past. And that’s why we have embarked on a process of renewal, of unity, rejuvenation, and we’re looking forward based on what we have done in the past and much more based on what lies in the future.”

The message of renewal, however, is a hard sell when the party’s list includes members such as Nomvula Mokonyane, who was water and sanitation minister when the department collapsed and is accused of taking bribes from Bosasa; Mosebenzi Zwane, accused of using his position as mineral resources minister to help the Gupta family buy Optimum Coal, and Bathabile Dlamini and Malusi Gigaba, both found to have lied in court.

Ramaphosa was still confident about the ANC’s chances. “The ANC’s going to win these elections, there’s just no question about that.” DM