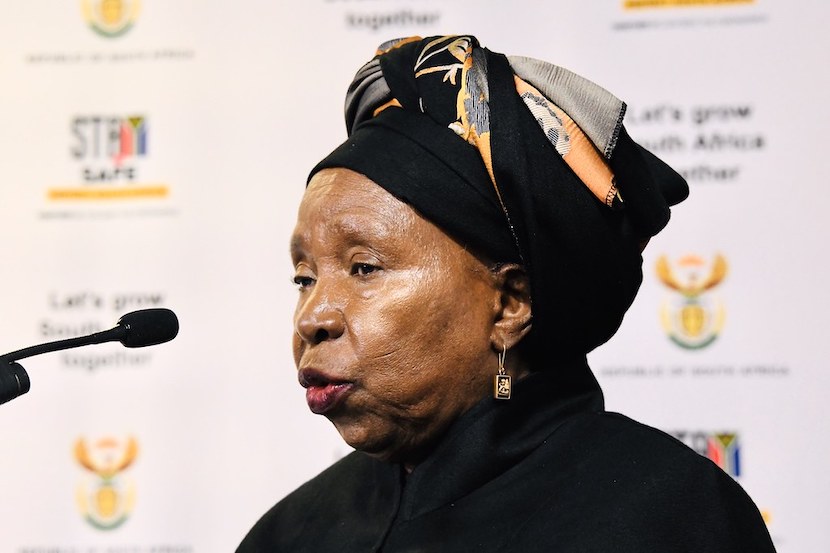 This carefully constructed analysis of what (if anything), the state of disaster has taught us culminates with the searching comment: what, actually, is the point of a government? It’s a question worth asking, given the totally incompetent, useless response by the government to the KwaZulu-Natal anarchy – which laid bare its incapacity on multiple levels – and once again, reminded us of our amazing ability to get by on our own. It’s been a hugely exposing exercise, this Covid-19 jag. Writing in the Daily Friend, Terence Corrigan reveals how doggedly resistant the ruling party is to change any of the central tenets of its destructive and proven economy-wrecking ‘corrective’ policies. If ever there was a chance to review and redirect, it was the state of disaster, yet the allure of a Central (in this case Covid-19), Command Council has the government considering extending this to other walks of life. A command economy fits perfectly with its socialist ideals, despite having failed everywhere else. Self-empowerment with ubuntu seems a foreign concept. – Chris Bateman

Reflections on the state of disaster

With those words, on Monday evening, President Cyril Ramaphosa announced an end to the state of disaster, the country’s Covid-19 ‘normal’ for the past two years. I doubt that any of us will forget this time, or the changes it forced on us. Nor, I think, what it has shown South Africa about itself.

The pandemic and the official response to it represented uncharted territory. Moments of crisis are useful indicators of the priorities of governments and the nature of the societies they rule. South Africa entered the pandemic in a dire state, already in recession and with an unemployment rate of 29%. Hopes previously invested in such initiatives as the National Development Plan had been disappointed, while the view of President Ramaphosa as a reformer – the New Dawn narrative – was fraying.

In a perverse way, the pandemic gave the country a sense of renewed hope. The imposition of the lockdown was widely seen as evidence of decisive leadership. The government was at least taking action, rather than prevaricating. And far better to go through this under President Ramaphosa than under his predecessor.

Indeed, the scale of the calamity globally was interpreted by optimists as just the gap that the president needed to push an ambitious, pro-business reform agenda. It was inconceivable that South Africa could aspire to an accelerated and sustained post-Covid-19 recovery with numerous policy albatrosses hanging around its neck. The president appreciated this.

It is difficult to think of any economic policy thrust that has been rolled back. Both empowerment policy and affirmative action remained entrenched, seemingly beyond discussion; except, from the state’s perspective, to the extent that they needed to be enhanced. Thus, tourism relief funds were to be dispensed according to empowerment criteria. When I, on behalf of the IRR, pointed to the foolishness of this, then tourism minister Mmamoloko Kubayi-Ngubane pointed to our stance as “most revealing” of the opposition to BEE. I had argued it was antithetical to growth and investment, had done little to encourage these prior to the pandemic and certainly could not be afforded after the damage the economy had suffered. I took the minister’s words as a major compliment, though I am not sure she meant it as one.

And despite confident predictions that the pandemic response would see off expropriation without compensation, this legislation remained a key part of South Africa’s policy agenda. It culminated in the ultimately unsuccessful attempt to amend the Bill of Rights for the first time in December last year.

Even under the exceptional conditions of the pandemic, and even as the need for an economic adjustment became a matter of common cause, ideology and political commitment put a hard brake on reform.

The wisdom and effectiveness of the lockdown orders will no doubt be debated for many years. I can have some sympathy for the government’s initial impulses to throw everything at the pandemic, though the excesses rapidly became clear, and there was clearly a ministerial appetite for ‘control’ governance. There was a rational case behind the prohibition on the sale of alcohol. The ban on the sale of tobacco represented a case of overreach. The measures against cooked food seemed to have more to do with ministerial imperiousness and making a point about who was in charge than with battling Covid-19.

Perhaps more disconcerting was the erosion of constitutional governance and civil liberties. True enough, South Africa did not experience the degree of repression that prevailed in some other countries. The news media were generally able to continue to operate, for example. But the deployment of the security forces to police the lockdown led to considerable abuse. A survey conducted in April and May 2020 reported that one in 10 South Africans had been harassed by the police or army. At times, this became lethal.

The official reaction to this did not always conform to that befitting a constitutional democracy. Police minister Bheki Cele told officers to “push” people back into their homes and to destroy facilities producing illicit liquor. President Ramaphosa – while vocal on racially charged abuses in the United States – dismissed police abuses in South Africa as a matter of having “let their enthusiasm get the better of them”.

Beyond this, South Africa came under the sway of a body with no clear constitutional or legal basis, the National Coronavirus Command Council (NCCC). It has never been satisfactorily explained how it functions or what its powers are, or under what supervision and oversight it operates. (Indeed, Parliament failed to make much of an impression on the state of governance during the pandemic, apparently content to follow the executive’s lead.)

And, of course, the pillaging of funds meant to deal with the pandemic emphasised an underlying venality in South Africa’s governance, given the state of crisis the country was in. This had both a moral and financial dimension and showed that even in the shadow of the rapaciousness of the past decade – perhaps because of it? – South Africa had a long way to go in bringing corruption under any sort of control.

It was unsurprising that the United Nations described South Africa’s as a “toxic lockdown culture”.

A less remarked-upon feature of the past two years has been what it has shown us about ourselves as a society. Official intent notwithstanding, this period has illustrated once again just how disorderly it is, and how pointless the writ of the state can be.

Despite harsh regulations, a combination of desperation, necessity and indifference rendered the lockdown more theoretical than real for millions of people within weeks of its introduction. In May 2020, GG Alcock, author of Kasinomic Revolution, wrote of the resumption of township business:

“Kasi businesses are saying they have no choice and are returning to work en masse. Members of my township network said that ‘township and informal businesses are at level 1 and suburbs and cities at level 4’. I have pictures to prove this from the survey: upholsterers out on the street, hair salons open, shisanyamas operating from backyards and selling through the front fence, car washes open and so on. On weekends, yard parties are becoming common. This sector doesn’t just want the lockdown to end, they have ended it, they have no choice. When livelihoods are at risk, people ignore health protocols or restrictions en masse.”

As Alcock suggests, the regulations were matched by a sometimes-fanatical commitment to maintaining measures to control the disease: remaining at home, masking, and so on. On occasion, journalists participated in this, shaming transgressors on social media. Outpourings of gratitude to President Ramaphosa – #WeAreLed and #CyrilFridays – were common (with some irony) for restricting society’s freedoms. This spoke to a desire for social order and security, for leadership, for a messianic figure to rise up and redeem the country from its malaise.

In a way, the high-water mark of the pandemic came in July last year. The riots that shook large parts of the country represented a confluence of poisonous politics, deprivation – both Covid-19-induced and long-standing – a widespread disregard for the law and the failure of the state. It laid bare, should this have been necessary, the multi-faceted crises that confronted South Africa and their logical – if not inevitable – consequences.

The pandemic compounded already concerning trends and illustrated a number of the underlying impulses that have brought us to this point. Perhaps the most important observation to be made is that on balance, the pandemic represented more continuity with than change from what came before, and what is likely to follow.

It changed so much, and not much at all.

Indeed, we see the imprint of the pandemic response emerging in the post-pandemic world. Much has been made of the use of regulations under health legislation to perpetuate measures adopted under the state of disaster. This is underway at present. It bears remembering that during the pandemic, the idea of adapting the NCCC to become an ‘institutional form’ for future governance was raised.

But for me, it is of greater importance that despite the damage and dislocation, South Africa seems to have moved the needle very little on the key policy questions. If empowerment considerations loomed large in respect of Covid-19 relief, it should be noted the pandemic caused no fundamental rethink on race-based labour policy.

South Africa’s authorities have not taken from this experience the imperative of adopting growth-enhancing policies. The reformist repertoire, such as it is, has been able to accommodate them.

Legislation providing for the minister of employment and labour to set racial quotas for firms is awaiting President Ramaphosa’s signature. We at the IRR have campaigned for him to refuse to sign it. Passage into law will only aggravate South Africa’s unemployment crisis. The latest statistics have the unemployment rate at 35%.

Expropriation without compensation has not been abandoned, and is currently being pushed through the Land Court Bill and Expropriation Bill. This stands to be an investment-killer in the near future.

Is there anything positive to be drawn from all this? Perhaps the fact that in spite of the battering South Africa has taken, we as a people have endured. Congratulations to those who struggled through, often against the odds: to businesses that managed to keep going in the face of hostile and sometimes crazy regulations; to our farming economy, which kept production going and the food supplies coming, and to many others.

President Ramaphosa has made the point, directly and indirectly, about South Africa’s resilience. This is correct but it’s worth pausing to think about. In this vein, Rebecca Davis of the Daily Maverick penned a piece in July last year, shortly following the riots. It was remarkable for the justified frustration it so eloquently expressed:

“As South Africans, we don’t get to be playful, or grumpy, or stingy, or sexy, or any one of a hundred other options for national stereotypes. We get to be RESILIENT. A nation of resilient little battlers, constantly picking ourselves up and dusting ourselves off after national tragedy or government scandal.

“Which brings me to another matter. The events of the past week have caused even the likes of me, who previously did not have a libertarian bone in her body, to ponder the question: what, actually, is the point of a government?”

There is not much I can disagree with here. The state failed catastrophically at this time. As I’ve previously phrased it, the presence of the police was often less impotent than irrelevant. It was all too often ordinary people who stepped into the breach, as is so often the case in this beautiful but tormented country.

Perhaps our capacity to do so is what will get us through in future.