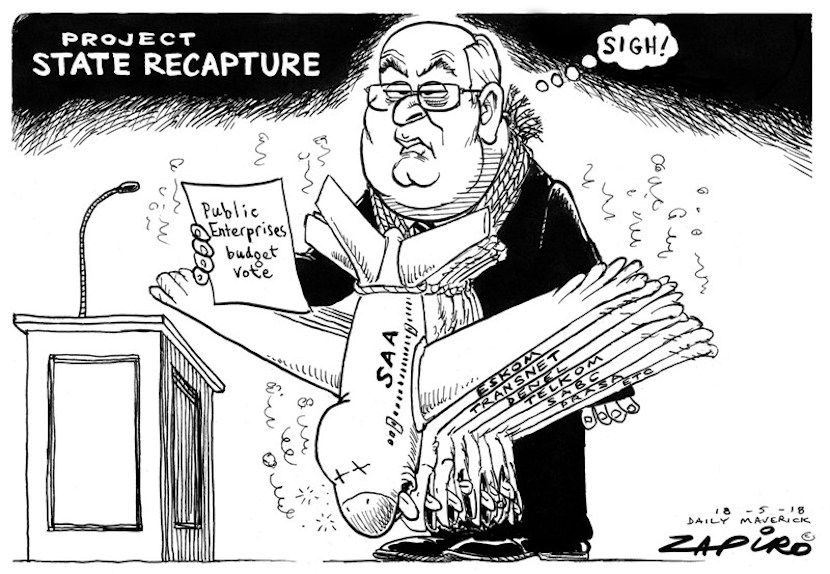 It is a big week for South Africa with the Eskom rescue plan unveiling and Finance Minister Tito Mboweni’s bid in his mid-term budget to convince investors and Moody’s that the government has a handle on the fiscal deficit and sovereign level debts amid bailouts for state-owned companies that strain finances at a time when tax revenue is falling short of targets. Budget watchers are asking whether the Government, led by Cyril Ramaphosa have the guts to “build the ladder” needed to get itself out of the hole that the former ANC government dug itself into. Ramaphosa and Mboweni have been urged for months by the business community to act urgently and decisively to accelerate economic growth in the country. Ann Bernstein, the executive director from the Centre for Development and Enterprise says her expectations that Mboweni will take the painful steps needed to fix the economy is “justifiably muted.” Bernstein lists the key things to watch out for in the medium term budget and it centres on spending plans, the government wage bill and who would be in charge of scarce resources. And her solution to the endless bailouts for state owned enterprises, let some of them fail. – Linda van Tilburg

Having accumulated more than R3trn in public sector debt, the profligacy of the past 10 years continues to devour South Africa’s future. Our increasing debt repayment costs consume an ever rising share of national income, leaving less and less money to spend on our many national challenges. Debt service charges are now the fastest rising spending item on the budget: it is twice as large as our spending on post school education and roughly the size of what we spend on public healthcare.

Minister of Finance, Tito Mboweni, will present the 2019 mid-term budget tomorrow. In a rational world, this is a document that would confront head-on the urgent task of setting public finances on a more sustainable path. But, in a world in which policy-makers are both indecisive and constrained by the need to please diverse constituencies, there is every reason to fear that it might be a damp squib.

This must have been an exceptionally difficult budget to craft. The biggest problem is that economic growth has continued to disappoint. Worse, there is every indication that revenue growth has been even more disappointing, and that, despite the steep increases in tax rates over the past few years, the value of taxes collected by government has grown much more slowly than Treasury expected.

This means that South Africa is looking at a budget deficit of more than the 4.5% of GDP announced in February 2019 even if the spending ceiling had not been breached. That breach occurred, however, with the passage of the special appropriation for Eskom which allocated an additional R26 billion to the utility in September.

We are, in other words, staring down the barrel of a larger-than-expected budget deficit for this financial year. That will mean that the ratio of debt to GDP will have increased by more than originally forecast. And, that, in turn has implications for the future.

The scale of South Africa’s debt and the rate of its increase is such that it is increasingly weighing down on growth rates as it increases the risk of really bad economic outcomes and raises borrowing costs for firms and households. The result, inevitably, is less investment and, therefore, slower growth.

We were already deep in a fiscal swamp and the disappointing budget outcome for this year will push us further away from solid ground. Given where we are, the real question is whether the minister is able to offer a plausible strategy for reducing the deficit over the next few years.

The experience of the last few years is one of rising tax rates which are then not followed by rising tax revenues. This means that the options he has are limited to a strategy that could accelerate growth or one that could reduce spending. These are not mutually exclusive, of course, but there is at least some risk that they may contradict each other, at least in the short-term since reduced public spending could slow growth.

It is also probably the case that private sector investment will not rise in the absence of clear signs that government is regaining control over runaway deficits. If that is so, then reductions to public spending will probably be needed even if the first-order effect is to put further pressure on growth rates in the short term.

In the face of all these challenges, there are some key things to watch out for in the medium term budget statement. These include three vital issues.

First, are spending plans based on realistic estimates of economic growth, rather than the inflated estimates that have underpinned excessively rapid growth in spending over the last decade? And, will these spending plans close the primary deficit in the next few years?

Second, will the growth of overall compensation spending be cut to no more than the rate of inflation, and, preferably less than that? Treasury data show that average wages in government have risen by nearly 11% a year between 2006 and 2016.

Third, will the allocation of scarce resources begin to shift spending away from incompetent institutions and failing approaches to clear new priorities?

Apart from these budget-focused bottom-lines, we should watch to see if the budget is accompanied by commitments to improved governance and management of public resources. Individually and collectively, the SOCs – Eskom, especially – are expensive messes. Tax-payers and the users of these entities’ services are already being bled dry by them, through price increases and ever-rising costs of doing business.

We know that the SOC sector cannot be turned around easily or quickly. But tax-payers and users are increasingly frustrated by the absence of any bankable sign that the bleeding will ever end. It’s way past time that government had credible plans to fix, restructure and sell some of these businesses. Where this is not possible, they must be prepared to let some fail. Many activities do not need to be in the public sector and liberalised markets could delivers goods and services at lower cost.

The SOCs are not the sole source of governance failures in the public sector. Government itself is riddled by corruption and inefficiency in its procurement of goods, services and infrastructure. Some of this is deliberate: preferential procurement rules are designed to push black-owned businesses into the supply chain even if they are not the least-cost service provider.

Whatever the merits of this as a policy goal, this system has been repurposed by tenderpreneurs whose prices are massively inflated and whose services are often non-existent. The whole system now needs serious reconsideration. The minister, a self-identified maverick, should buck his party’s orthodoxy and stake out policy positions that would seek to fix some of this.

This is not a list of radical proposals for the budget, and, if anything, it may be too little to reset our debt trajectory. Getting even this much may be beyond the power of the minister, given the indecisiveness and inabilities of the government. That is why he also needs a credible plan for accelerating growth.

Here, his starting point should be the document Treasury released in August which, while imperfect, marks a significant and positive rhetorical and conceptual break from the past. The challenge, of course, is that a budget can only do so much to drive the micro-economic reforms that are proposed in it, and it is far from obvious whether and to what extent the cabinet supports them.

Any sign of credible and meaningful progress towards implementing these changes would be welcome, but citizens and analysts would be within their rights to treat much of what the minister says about these as hot air until evidence to the contrary emerges.

South Africa has dug itself into a deep hole, and scepticism about the ruling party’s ability to build the ladder we need to get out of it is warranted. The minister faces some hard choices and the most likely outcome, it seems, is that he does not have the political capital to do anything but duck them.

This is a deepening tragedy, one that is costing the country more every year it persists. Expectations that we will make meaningful progress to a more sustainable trajectory are justifiably muted; exasperation rules in its stead. Hopefully, the minister proves this assessment wrong.