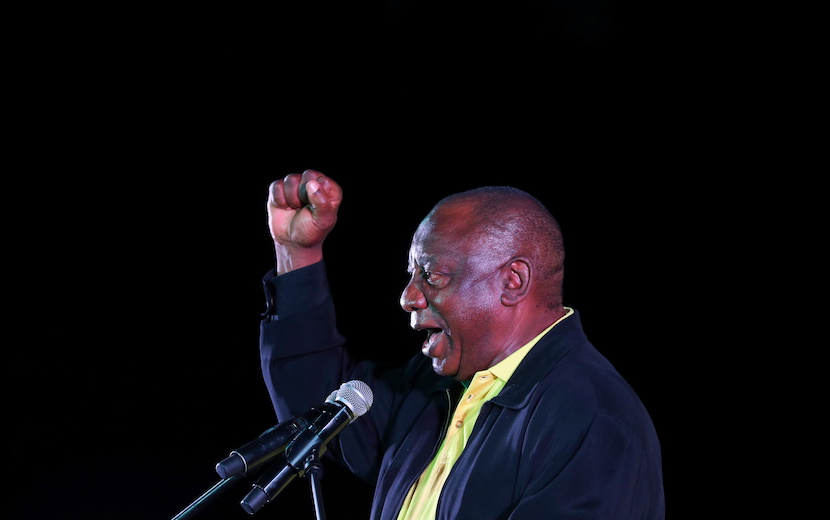 If we really believe in, and actually work to make true, the ubiquitous cross-cultural Afrikaans expression of alles sal regkom, we need to brace ourselves for upheaval. The two polar opposite (of four) scenarios sketched by the IRR’s Centre for Risk Analysis, predict widespread turmoil. That’s either via radically needed coalition reform, prompting unrest and widespread resistance, or a slide backwards (i.e. a successful ANC/EFF rearguard action). This would mean the corrupt, incompetent, greedy despots embedded in the current system – AKA the Zuptoids – come out of hiding and finish off what remains of South Africa’s potential. Right now, we have the rhetoric of reform without substantial action, leading to disastrous economic performance. We can only pray ample South Africans will say ‘enough is enough’ and get to the polls to express that sentiment. The real question is: how fed up (or rather underfed) does the populace have to be to want substantial change? And … for whom will such a jobless army march? Only time will tell. Story courtesy of the Daily Friend. – Chris Bateman

Wild dogs make the kill: Can a coalition bring about post-ANC reform?

Gazing into what might lie ahead for the country has a large following in South Africa. That is because of our condition of misgovernance and divisions. We are bang vir die toekoms.

Since the unrest in July last year in KwaZulu-Natal and Gauteng, a succession of record high quarterly unemployment readings, reports of businesses including Massyn Vervoer leaving the country, the collapse of state-owned enterprises, and no end to power cuts, we have become increasingly anxious about what lies ahead.

With the faltering electoral support of the ANC, there is a new opening, which could lead to reform and change. Coalitions without the ANC or EFF might act as the new force in South African politics to change our trajectory. A reform-minded coalition could be South Africa’s best hope of emerging from our low-growth and high-unemployment trap.

The Centre for Risk Analysis, the consulting arm of the Institute of Race Relations, recently launched its latest scenarios for the country. Behind the scenarios, presented by the Institute’s CEO John Endres and an analyst Bheki Mahlobo, are two fundamental dimensions: declining support for the ANC and the need for reform. The scenarios assume the country will continue to be open and democratic.

Four scenarios emerge from this; two are pessimistic with no reform, and two are optimistic with reform. The worst-case scenario that emerges is named ‘Hyenas plunder the carcass’. In this scenario the ANC majority falls below 50%, with the ANC relying on the EFF to rule. Under this there is expropriation without compensation (EWC), prescribed assets, a blowout government budget deficit – which the Reserve Bank is forced to monetise – and an expanding state.

The scenario in which we are currently trapped is labelled the ‘Buffalo stumbles’ and is characterised by the rhetoric of reform with no substantial action, resulting in a disastrous economic performance. In this scenario, the ANC doubles down on its failed policies and we remain in a low-growth, high-unemployment trap.

Our predicament today highlights this. EWC remains on the ANC agenda, the deep problems of the state-owned enterprises are not being addressed and power cuts continue. More stringent empowerment requirements will be imposed on businesses when the Employment Equity Amendment Bill is passed. The Trade and Industry Minister, Ebrahim Patel, is intent on pursuing a policy of localisation, which will require a list of products to be made in the country. This is a form of protectionism and could substantially drive up prices.

Then there is the more optimistic, but low probability ‘The buffalo charges’ scenario. Under this, the ANC changes heart and goes ahead with sweeping labour market, empowerment, energy, education, and property rights reforms. The growth rate rises, debt peaks and confidence in the country is restored.

The fourth scenario is the most optimistic and is increasingly probable. Under this, ANC share of the vote falls below 50% and a reform-minded coalition takes over. The ‘Wild dogs make the kill’ scenario sees the ANC being pushed below 50% at the polls in 2024. It is replaced by a squabbling coalition government, but the 2029 election sees a new dominant player emerge. This leads the way to sweeping structural reforms to place the country on a path to strong growth, lower debt, large-scale job creation, and higher living standards.

That describes the ideal, but there is likely to be a lot of blood and sweat on the way to this. 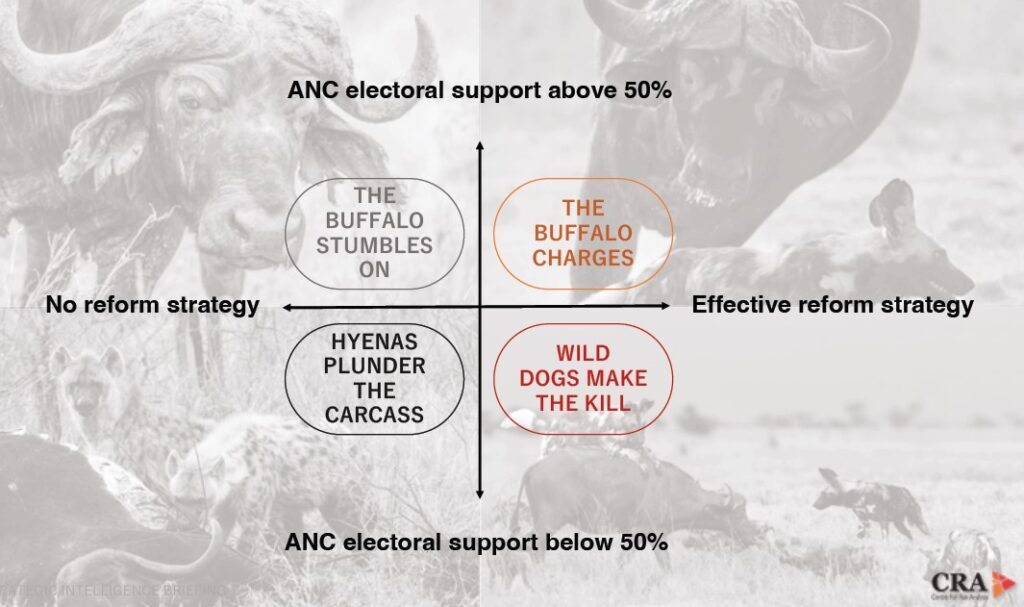 With the drop in the ANC share of the vote, the natural order of politics in South Africa will move towards many more local and national coalitions. Coalitions are inherently fragile and need great political skill and time to manage, but they can often govern well.

In a first-past-the-post constituency system, smaller parties – where support might be spread over multiple constituencies – may fail to win any seats. But under a system of proportional representation, as we have in South Africa, parties receive seats based on the overall number of votes they receive. That means, in the absence of an overwhelmingly dominant party – as has been the case with the ANC so far – we have a system disposed to coalition governments.

Even if a pro-reform coalition is in place, a difficult job lies ahead. Infighting in a coalition can be constant and destabilising, and reform itself is a difficult task. The civil service will not be sympathetic, as reform has to mean a cut in staffing numbers and is likely to involve the privatisation of public enterprises. There would also be investigations and possibly prosecutions for corruption. There would be a lot less scope for empowerment deals and favoured jobs. All that would array powerful vested interests against a reform coalition.

Severance packages might ease the way, and a growth spurt could mean alternative jobs. But the government would have to see to it that security forces act against possible nationwide violent demonstrations and destruction of state property. What would help is a strong vote in favour of reform as unemployment and deprivation might have reached high levels.

Reform would probably have to be sudden and large scale rather than done in a piecemeal and gradual manner. Rapid reform can ensure the benefits flow quickly, which would help build support.

So there is an increasingly high chance that alles sal regkom, eventually.